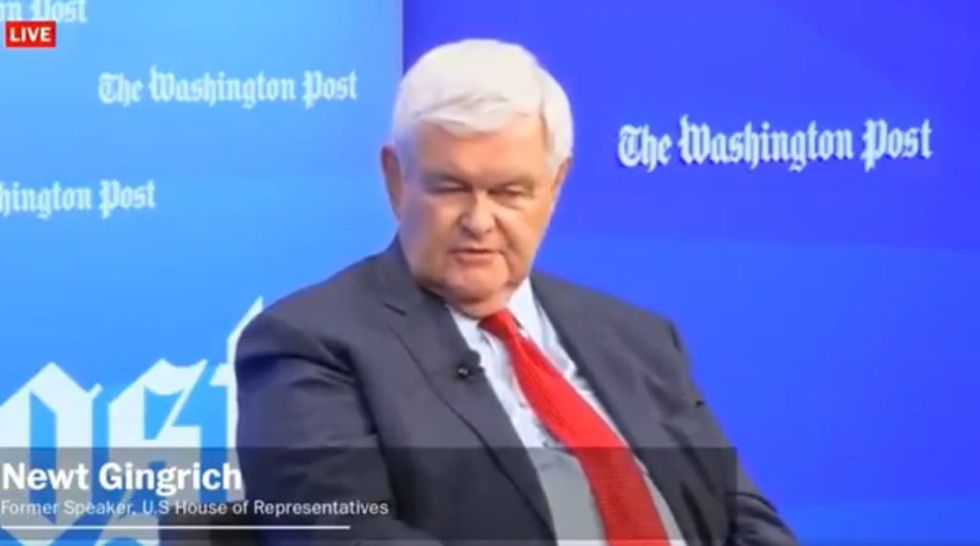 Now that Kavanaugh is safely tucked into his lifetime appointment, Trump supporters are making their motives more transparent. One of those is Republican former Speaker of the House Newt Gingrich, who shocked the audience at a Washington Post event with his answer to what would happen if the president was subpoenaed for his tax returns.

"Then it will be trapped--put into the Supreme Court and we'll see if the Kavanaugh fight was worth it."

Watch the chilling exchange below.

Gingrich's sentiments are what many Democrats feared upon discovery that Kavanaugh once opined that a president couldn't be indicted. If Gingrich is right, then Justice Kavanaugh didn't receive this lifetime appointment based on his merits or what is good for the country, but based on his allegiance to a corrupt and unpredictable president with historically low approval ratings.

Many Americans were unsettled but not surprised.

@AynRandPaulRyan At long last a little transparency and a guarantee: Kavanaugh is a plant for Trump. The Supreme Co… https://t.co/t2qorH3pzx
— H Wayne Storey (@H Wayne Storey) 1540518581.0

@AynRandPaulRyan He's saying it out loud but we all knew that was why they shoved Kavanaugh down our throats.… https://t.co/tzHfeZtgVR
— Brian Lang (@Brian Lang) 1540516498.0

@AynRandPaulRyan Please forgive me for being Capt. Obvious for a moment, but the surprise of course is not that it'… https://t.co/UxxNBaJqD4
— Gazoo (@Gazoo) 1540516509.0

Through the lens of Gingrich's slip of the tongue, the entire Kavanaugh confirmation saga begins to make more sense.

Even after multiple sexual assault allegations upended what was supposed to be a smooth confirmation process and still after Kavanaugh had the lowest popularity of any Supreme Court nominee in recent history, President Donald Trump and Republicans stuck firmly by him.

Many asked why the president refused to consider another nominee whose behavior didn't introduce so many questions.

Schumer says he hopes the Senate “can salvage some decency” by rejecting the Kavanaugh nomination and ask Pres to s… https://t.co/rCMm60MFOP
— Mark Knoller (@Mark Knoller) 1538749222.0

The president blamed Democrats for the tumult instead.

....looking to inflict pain and embarrassment to one of the most highly renowned jurists to ever appear before Congress. So sad to see!
— Donald J. Trump (@Donald J. Trump) 1536093698.0

Republicans followed suit, painting the Democrats as desperate and despicable for daring to hold up the nomination of such a saintly man, and they continue to use the confirmation hearing to characterize democrats as an "angry mob" on the campaign trail in hopes of maintaining their majorities in the legislative branch.

The assurance that Kavanaugh would remain loyal to the troubled president (something we know Donald Trump values) could explain the party's tenacity throughout the confirmation process.

Unfortunately, Gingrich is right. It won't be long before the American public finds out if Kavanaugh's allegiance will be to the president or the country.