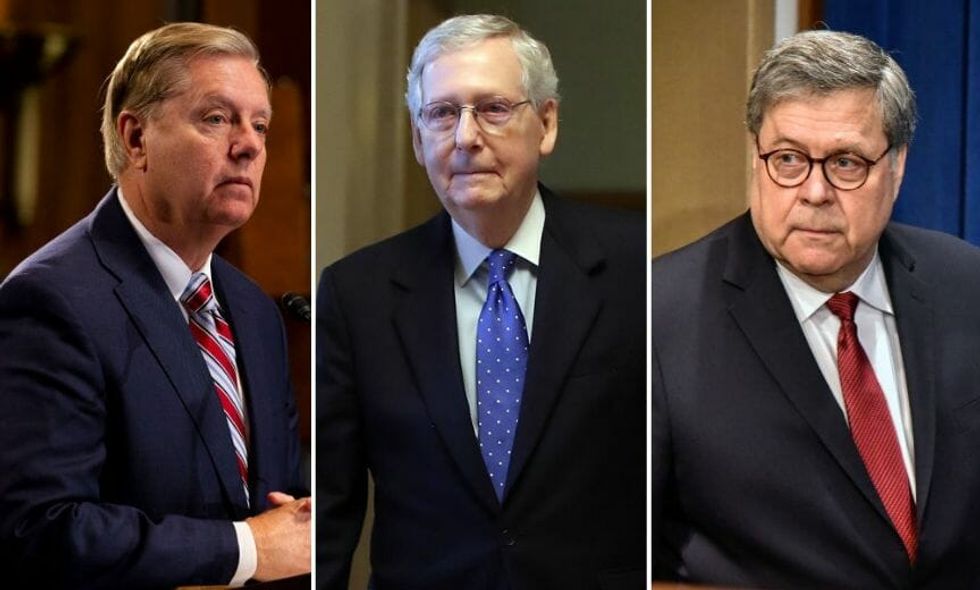 The latest cover of The New Yorker—and others—assert the checks and balances set forth in the Constitution are breaking down under the administration of President Donald Trump. The New Yorker cover shows Senate GOP leadership as well as the head of the Justice Department going beyond being complicit with the President and moved into supplication.

The magazine shared the latest cover on social media where the image immediately drew attention. It was quickly shared by many.

The cover illustration by artist Barry Blitt, entitled "The Shining," depicts President Trump seated on a raised dais while three men kneel at his feet to shine his shoes. The men are Republican South Carolina Senator Lindsey Graham—Chair of the Senate Committee on the Judiciary, Attorney General William Barr—head of the Justice Department and Senate Majority Leader Mitch McConnell of Kentucky, also a Republican.

People thought the cover captured actions and attitudes of the three perfectly.

But some thought it didn't go far enough.

@jaketapper @NewYorker I guess that's the cleanest they could make that kind of cover.. wonder how Hustler would have cartoon'd it?
— Randall Stephens (@Randall Stephens) 1558649298.0

Coming from a history of monarchy rule, the framers of the United States Constitution borrowed concepts of confederation government from the Haudenosaunee Confederated tribes and Powhatan Confederacy of North America to develop a new form of government.

Critical to avoiding a return to dictatorial rulers for life was the series of checks and balances between the three branches of government: executive, legislative and judicial.

But President Trump speaks often of a necessity for loyalty to him, not the Constitution or laws of the United States. While the free press and some in the judicial and legislative branches continue to uphold their oath to defend and preserve the Constitution, Trump paints them as enemies of the state in his MAGA rallies and on Twitter for their lack of fealty.

But those who wish to remain in the executive branch either tow the line without question or find themselves ousted. The Trump executive branch has not been completely staffed since the inauguration and turnover is record setting.

But a compromised executive branch is only as effective as Congress and the judiciary's willingness to remain complicit in any unethical, immoral or illegal activities done by members of that branch.

And The New Yorker clearly called out three powerful components of the system of checks and balances that appear broken.

In addition to President Trump, GOP Senators Mitch McConnell and Lindsey Graham are up for reelection in 2020.