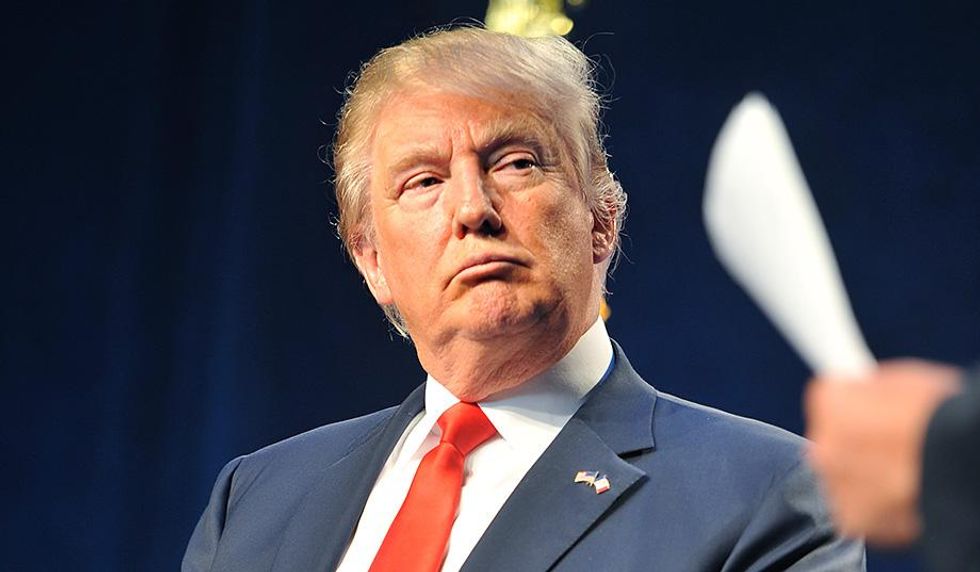 On Wednesday, the New York Times published the detailed accounts of two women who came forward to accuse Donald Trump of sexual assault. In the last 48 hours, four women have now stepped forward publicly to challenge Trump's statement at the second presidential debate that he did not kiss or grab women as he had boasted on the leaked Access Hollywood tape from 2005. By the end of the business day, Trump's lawyer, Marc E. Kasowitz, had sent the Times a letter demanding it retract the story and issue an apology––or face a lawsuit for libel.

“Your article is reckless, defamatory and constitutes libel per se,” Kasowitz wrote. “It is apparent from, among other things, the timing of the article, that it is nothing more than a politically motivated effort to defeat Mr. Trump’s candidacy. That is why you apparently performed an entirely inadequate investigation to test the veracity of these false and malicious allegations, including why these two individuals waited, in one case, 11 years, and, in another case, more than three decades, before deciding to come forward with these false and defamatory statements." Should the Times refuse to comply, Kasowitz stressed, it would leave Trump "with no option but to pursue all available actions and remedies."

David McCraw, vice president and assistant general counsel of the Times, followed up with a staunch refusal. “The women quoted in our story spoke out on an issue of national importance––indeed, an issue that Mr. Trump himself discussed with the whole nation watching during Sunday night’s presidential debate,” McCraw wrote. “It would have been a disservice not just to our readers but to democracy itself to silence their voices.”

McCraw also explained that Trump could not seriously allege the Times committed libel: "The essence of a libel claim, of course, is the protection of one’s reputation. Mr. Trump has bragged about his non-consensual sexual touching of women. He has bragged about intruding on beauty pageant contestants in their dressing rooms. He acquiesced to a radio host’s request to discuss Mr. Trump’s own daughter as a “piece of ass.” Multiple women not mentioned in our article have publicly come forward to report on Mr. Trump’s unwanted advances. Nothing in our article has had the slightest effect on the reputation that Mr. Trump, through his own words and actions, has already created for himself."

Additionally, McCraw noted, Trump's threat would violate the First Amendment, which, according to the decision in New York Times v. Sullivan (1964), "protects the publication of all statements, even false ones, about the conduct of public officials except when statements are made with actual malice (with knowledge that they are false or in reckless disregard of their truth or falsity)."

"The women quoted in our story spoke out on an issue of national importance—indeed, an issue that Mr. Trump himself discussed with the whole nation watching during Sunday night’s presidential debate," McCraw wrote. "Our reporters diligently worked to confirm the women’s accounts. They provided readers with Mr. Trump’s response, including his forceful denial of the women’s reports. It would have been a disservice not just to our readers but to democracy itself to silence their voices. We did what the law allows: We published newsworthy information about a subject of deep public concern."

If Trump "disagrees," he concluded, "we welcome the opportunity to have a court set him straight."

Trump has taken a combative approach to the news media in the past. In fact, he once pledged he would "open up" libel laws so he could sue press organizations more easily. Recently, Trump threatened to sue the Times for publishing part of his 1995 tax return, in which he claimed a $916 million loss. The deduction was so substantial it could have allowed Trump to legally avoid paying federal income taxes for nearly two decades.