Donald Trump Said He Wants Jeff Sessions to Uncover Who the Author of the Anonymous OpEd Is, and The New York Times Just Shut Him All the Way Down 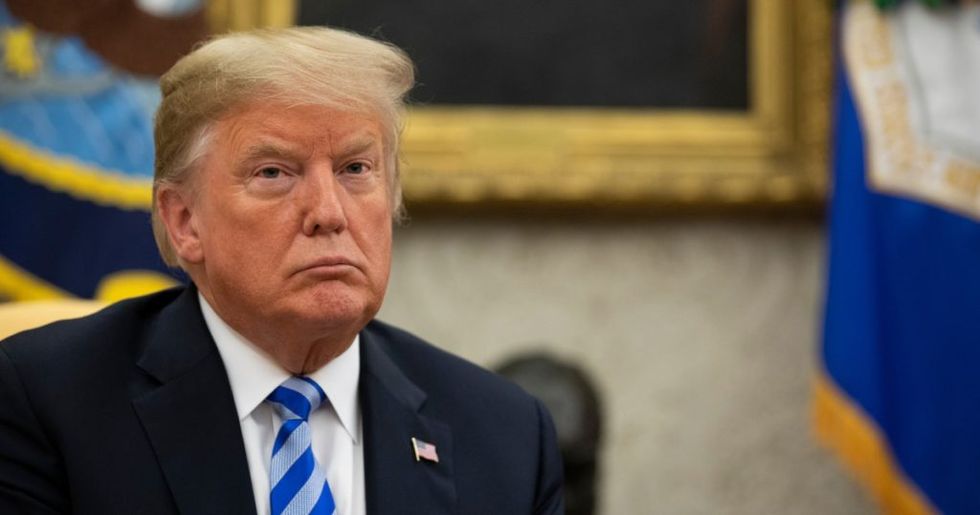 WASHINGTON, DC - SEPTEMBER 05: US President Donald Trump attends a meeting with the Emir of Kuwait Jaber Al-Ahmad Al-Sabah in the Oval Office of the White House on September 5, 2018 in Washington, DC. (Photo by Alex Edelman- Pool/Getty Images)

President Donald Trump on Friday called on Attorney General Jeff Sessions and the Justice Department to launch an investigation into who penned a scathing anonymous op-ed in Wednesday's New York Times.

"Yeah, I would say Jeff should be investigating who the author of this piece was because I really believe it's national security," Trump told reporters aboard Air Force One. "We’re going to take a look at what he had, what he gave, what he’s talking about, also where he is right now," Trump said of the unnamed author.

The Times quickly shut down Trump's request, calling it a "blatant abuse of government power."

The Times said in a statement:

We’re confident that the Department of Justice understands that the First Amendment protects all American citizens and that it would not participate in such a blatant abuse of government power. The president’s threats both underscore why we must safeguard the identity of the writer of this Op-Ed and serve as a reminder of the importance of a free and independent press to American democracy.

The public is standing with the Times, which regularly draws Trump's ire as an "enemy of the people" and "fake news."

@NYTimesPR @nytimes So glad you printed the anonymous letter. Many people out here that are very concerned about th… https://t.co/Upsom6oa6T
— Ellen Morgan (@Ellen Morgan) 1536351460.0

Trump did not indicate what law he thinks the official violated in writing the op-ed.

Justice Department spokeswoman Sarah Isgur Flores declined to comment beyond saying in a statement: "we do not confirm or deny investigations."

Trump has referred to the "senior administration official" that wrote the op-ed as "gutless" and a "coward."

On Wednesday night, Trump had a Twitter meltdown after the Times published the editorial, suggesting that the unnamed author committed treason (they didn't).

He also accused the "failing New York Times" of using a "phony source" and that the Times should "turn him/her over to [the] government at once!"

He then called on the Times to investigate itself.

Are the investigative “journalists” of the New York Times going to investigate themselves - who is the anonymous letter writer?
— Donald J. Trump (@Donald J. Trump) 1536275522.0

On Friday, Trump mused on the idea of taking legal action against the times. "Well, we're going to see," he told reporters.

The president also suggested, without evidence, that the op-ed presents a threat to national security.

"We're going to take a look at what he had, what he gave, what he's talking about, also where he is right now," Trump said. "Suppose I have a high-level national security and he has got a clearance -- we talk about clearances a lot recently -- and he goes into a high-level meeting concerning China or Russia or North Korea or something and this guy goes in. I don't want him in those meetings."

The president added that he can't fight back because the author of the piece remains unnamed.

"I don't mind criticism, I handle it and I fight back," he said of the "disgraceful" editorial. "But here's criticism where you can't fight back. 'Cause you have somebody doing it anonymously."

Most senior administration officials have denied penning the blistering "resistance" editorial, but the witch hunt continues.

Senator Rand Paul (R-KY) suggested on Thursday that the Trump administration administer polygraph tests to senior officials so they can identify the author.

"I think it's not unprecedented for people with security clearances to be asked to, whether or not they were revealing things against the law under oath and also by lie detector," Paul said on Capitol Hill. "We use a lie detector test routinely for CIA agents and FBI agents. I think if you have a security clearance in the White House, I think it would be acceptable to use a lie detector test and ask people whether they are talking to the media against the policy of the White House."

He continued: "This could be very dangerous if the person who is talking to the media is actually revealing national security secrets. So, yes, I think we need to get to the bottom of it."
anonymous new york times opedDonald TrumpNew York Times