The White House Just Unveiled Its New Rules for Reporters at Press Conferences, and People Have Concerns 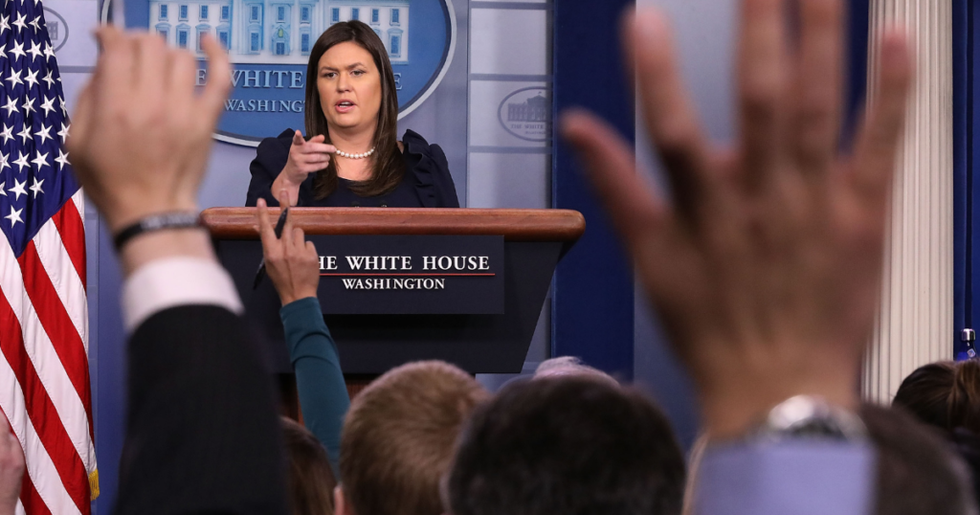 The White House on Monday wrote to CNN's Jim Acosta to inform him that they would be reinstating his "hard pass" to grant him access to the White House press events, and also indicated that it would impose four new rules on all White House correspondents.

"Having received a formal reply from your counsel to our letter of November 16, we have made a final determination in this process: your hard pass is restored," the White House wrote to Acosta. "Should you refuse to follow these rules in the future, we will take action in accordance with the rules set forth above. The President is aware of this decision and concurs."

A federal judge issued a temporary restraining order against the administration on Friday, forcing the White House to reinstate Acosta's hard press pass.

In their threatening letter to Acosta, the White House laid out restrictive new regulations to limit journalists' ability to question the administration.

The guidelines are a warning to reporters that if they start asking questions the administration does not like, or if more than one question is asked at a time, reporters could have their press passes revoked.

The new rules are as follows:

Per pool, White House lays out rules for reporters to abide by during press conferences or risk having hard passes… https://t.co/XsaXEh8f11
— Eliana Johnson (@Eliana Johnson) 1542662418.0

In a follow-up statement, White House Press Secretary Sarah Huckabee Sanders cautioned that further restrictions may be implemented if journalists don't fall in line, but emphasized that President Donald Trump supports the First Amendment which guarantees a free press.

"The White House's interaction with the press is, and generally should be, subject to a natural give-and-take," Sanders said. "President Trump believes strongly in the First Amendment, and a free press and is the most accessible President in modern history.  It would be a great loss for all if, instead of relying on the professionalism of White House journalists, we were compelled to devise a lengthy and detailed code of conduct for White House events."

Journalists are not pleased about being stifled.

So, out of their Acosta nonsense, the White House has made it a punishable violation for anyone to say “could you p… https://t.co/lPhzgaEGuO
— Daniel Dale (@Daniel Dale) 1542660087.0

This has basically been standard procedure - don’t hog the mic, don’t ask a bunch of questions if the president wan… https://t.co/EbXcpe7uoZ
— Daniel Dale (@Daniel Dale) 1542660718.0

And this goes to show that at least when it comes to the media, this White House is all in favor of new regulations. https://t.co/ZQXx5PWlD6
— ErikWemple (@ErikWemple) 1542662176.0

@brianstelter Where in the Constitution does it say "Press freedom means only one question per reporter"?… https://t.co/NcrrpEEWyF
— SteveBrant (@SteveBrant) 1542659714.0

@andrewmseaman I guess we'll have to wait for the rulemaking notice in the Federal Register for that legitimate point. :)
— ErikWemple (@ErikWemple) 1542663084.0

@elianayjohnson And these rules are "decorum." Do they apply to the White House staff as well as the Press Corps?
— Anita Warren (@Anita Warren) 1542663248.0

@brianstelter Here’s a better rule: How about they actually answer questions instead of divert and insult?
— Drew McQuade (@Drew McQuade) 1542660040.0

@elianayjohnson How about ‘nobody will speak until the previous question has been answered fully’
— Joe (@Joe) 1542663943.0

@elianayjohnson Is there anything in there about the White House showing any decorum to the press?
— MKinney (@MKinney) 1542663952.0

In an interview with Chris Wallace of Fox News on Sunday, Trump doubled-down on his dislike for Acosta and that the White House would "create rules and regulations for conduct" to curtail pushy reporters.

"If he misbehaves," Trump said of Acosta, "we'll throw him out or we'll stop the news conference."

Twitter exploded with concerns that Trump and his White House are inching toward dictatorship by trying to limit their engagement with reporters.

People are urging journalists to band together and stand up for freedom of the press.

@ddale8 The Press MUST ask follow up questions b/c Trump Administration always lies or pivots to talk about somethi… https://t.co/ZEocfuVsKh
— VeniceForTruth (@VeniceForTruth) 1542664946.0

@brianstelter Keep fighting and reporting the truth Acosta. Our country needs you now more than ever.
— Shannon (@Shannon) 1542659725.0

@brianstelter Then it’s important that other journalists ask the follow up questions.
— Inez Jessop (@Inez Jessop) 1542661715.0

During a trip to California to tour wildfire damage on Saturday, Trump said journalists need to behave or else he may just stop talking to them altogether.

"People have to behave," Trump groaned, adding, "we're writing up rules and regulations to make our position." He continued: "And if they don't listen to the rules and regulations, we'll end up back in court and we'll win. But more importantly, we'll just leave, and then you won't be very happy."