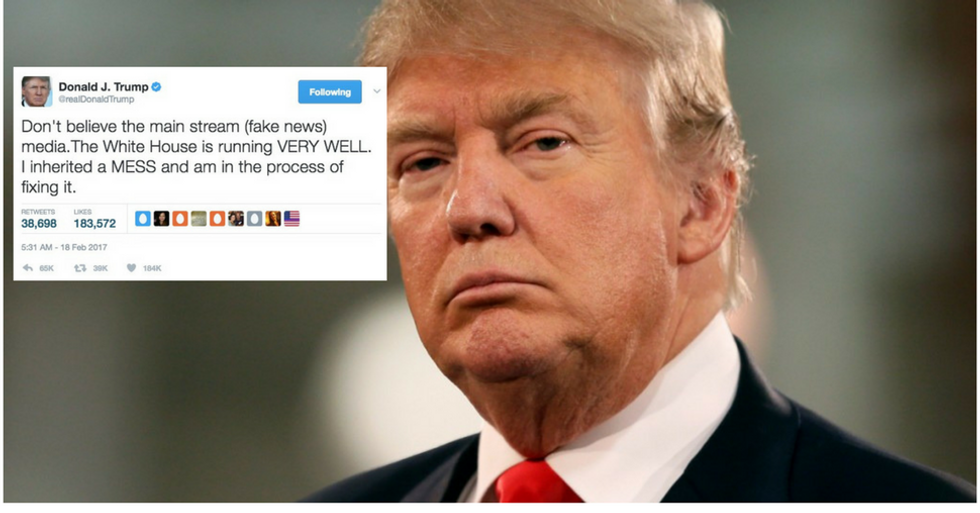 "President Donald Trump's popularity is sinking like a rock," said Tim Malloy, assistant director of the Quinnipiac University Poll. "He gets slammed on honesty, empathy, level headedness and the ability to unite. And two of his strong points, leadership and intelligence, are sinking to new lows. This is a terrible survey one month in."

"The media, so demonized by the Trump Administration, is actually a good deal more popular than President Trump," Malloy said, pointing to 52 percent of respondents who said they trust the media to tell the truth about the president. By contrast, only 37 percent say they trust the president to "tell you the truth about important issues." 90 percent of American voters say it is "very important" or "somewhat important" that the news media "hold public officials accountable."

More than half of those surveyed (56 percent) say they disapprove of Trump's foreign policy, and although Trump has advocated for a more hardline approach to terrorism, only 49 percent say they approve of the way he's handled the issue. He faces high disapproval on immigration (58 percent) despite making building a wall along the country's southern border a cornerstone of his campaign, and on the way he's handled allegations that Russian operatives meddled in last year's presidential election (57 percent). 53 percent of respondents oppose suspending travel to and from seven Muslim-majority nations outlined in his currently blocked executive order travel ban, and 60 percent oppose barring refugees from entering the country.

"In polling, you often analyze a question by measuring the difference between the share of respondents that gives the positive answer and the share that gives the negative one, writes Josh Barro, a senior editor for Business Insider. "By this measure, Trump was at plus-18 on the "good leader" question in November, and now he's at minus-13, a decline of 31 points in three months. His term lasts another 47 months."

For his part, Trump says he inherited a "mess."

Don't believe the main stream (fake news) media.The White House is running VERY WELL. I inherited a MESS and am in the process of fixing it.
— Donald J. Trump (@Donald J. Trump) 1487424713.0

“In all fairness,” he told reporters earlier Wednesday, “I’ve only been here for four weeks, so I can’t take too much of the blame for what’s happened.”