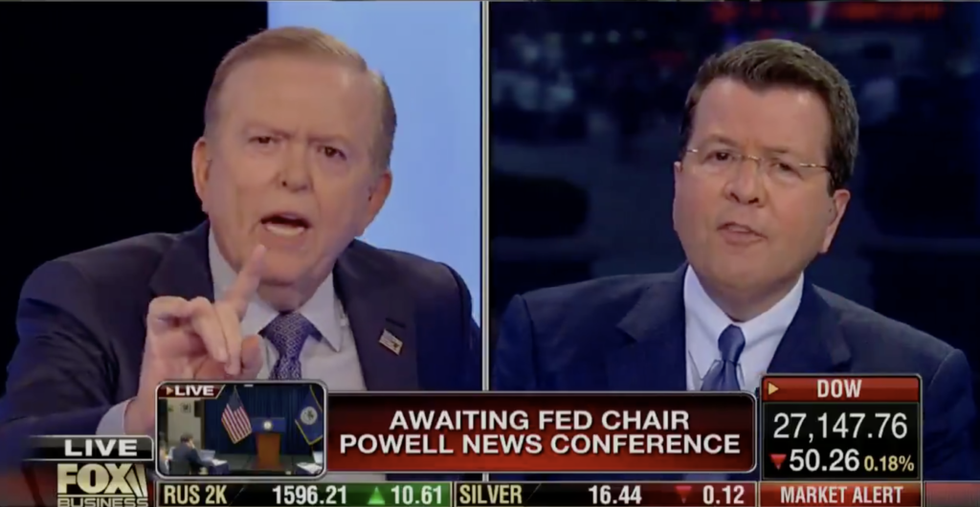 One of President Donald Trump's most exhausted talking points is the prosperity of the economy he inherited from former President Barack Obama.

The federal national debt has skyrocketed by $2 trillion since the beginning of Trump's presidency, contrasting his campaign promises to eliminate the national debt in eight years. The deficit has ballooned by 23 percent compared to last fiscal year.

Fox Business host Neil Cavuto called attention to this on the air. His colleague and Trump devotee Lou Dobbs attempted to defend the president, but couldn't name a specific action from Trump that resulted in a lower deficit and debt.

Things got heated as a result.

"Do you think this president has done anything to contain the deficits and the debt that have spiraled from what levels he had from Barack Obama?" Cavuto pressed.

"I do, indeed," Dobbs responded.

Clarifying that he was talking about the deficit and the national debt, Cavuto asked again, "Has he improved it, yes or no?"

Dobbs grew visibly frustrated. "I didn't interrupt you, Neil. And you've done it to me now twice."

Other people seemed to know how Trump affected the deficits and debt.

Last month, the White House predicted the deficit would rise to $1 trillion in 2019, the first time since the Great Depression it has risen that high.