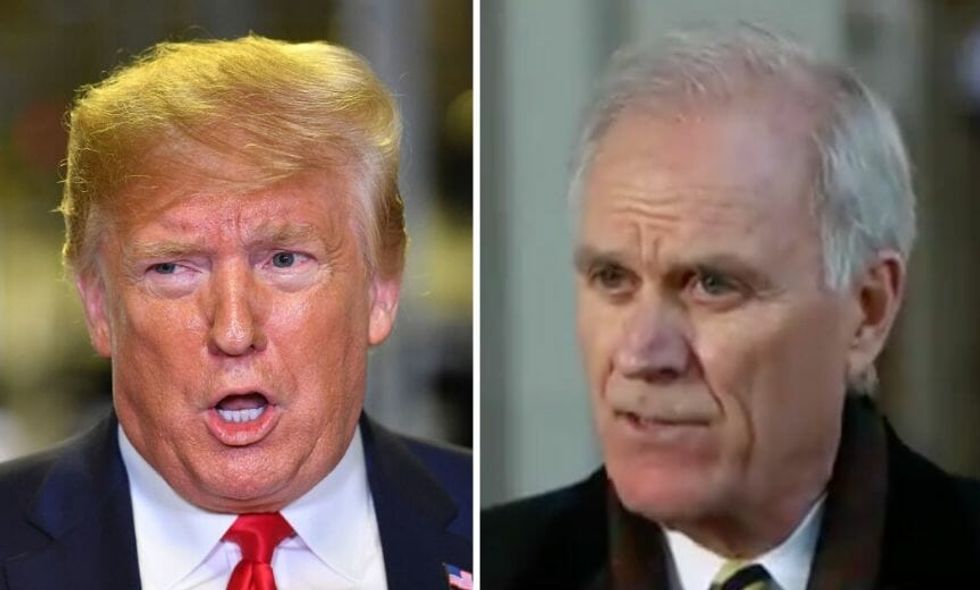 Gallagher was found guilty in a military court after he unlawfully posed with the dead body of a teenage ISIS fighter, among other misconduct reported by his fellow SEALs. Gallagher was set to lose his Trident pin—meaning he'd be demoted from a Navy SEAL. Gallagher's guilt was found by a jury of his peers: fellow Navy SEALs.

That was until Trump suddenly reversed the demotion on November 15. By November 21, Trump tweeted about Gallagher, instantly transforming him from convicted war criminal to celebrated war hero in the eyes of Trump's base.

After Trump ordered Secretary of Defense Mark Esper to end the review of Gallagher's conduct, Secretary Spencer resigned with a scathing rebuke of Donald Trump's management style in his resignation letter.

That rebuke continued in an interview Spencer gave to CBS News.

He didn't stop there.

Spencer went on to say that Trump's interference defies the standards upon which the military runs.

Others agreed that Trump was setting a dangerous precedent.

@CBSEveningNews @CBSDavidMartin As a Navy veteran, I see this as unconscionable. Trump is attracting the worst peop… https://t.co/Lnhgu7mlZd
— JudgeYouHarshly (@JudgeYouHarshly) 1574730251.0

@CBSEveningNews @CBSThisMorning @CBSDavidMartin Well, of course. It is the lesson of the Trump presidency. No con… https://t.co/bjkwjOiDx2
— Theresa (@Theresa) 1574721075.0

@CBSEveningNews @CBSDavidMartin HE EXCUSES criminalty in others to excuse his criminality. Everyone in the gutter with him.
— Connie C. Keys (@Connie C. Keys) 1574721723.0

@CBSEveningNews @CBSDavidMartin once again trump has decided that he knows best. and i try to understand his purpos… https://t.co/xyJpACLT3t
— hippiegirl (@hippiegirl) 1574781825.0

@CBSEveningNews @CBSDavidMartin Good order and discipline don’t live in Trump’s mind. Hence, you can get away with anything.
— Christa McCauley (@Christa McCauley) 1574766768.0

A new article from The Daily Beast reports that Trump is now looking to have pardoned war criminals campaign for him in 2020, which may explain why he's been so quick to pardon them in the first place.