Nat'l Sec'y Council Spokesman: "Because of Trump, I Quit."

Aileen Wagner
Feb. 21, 2017
Edward Price has served at the CIA for 11 years. He spent the last three years working in the White House and was the spokesperson for the National Security Committee. Last week, he quit. Yesterday, the Washington Post published Price's explanation.

Price insists that his decision was not about politics, but about the lack of respect for the work done by intelligence professionals. "What intelligence professionals want most is to know that the fruits of their labor — sometimes at the risk of life or limb — are accorded due deference in the policymaking process," wrote Price. He also criticized the appointment of senior adviser Steve Bannon to the National Security Counsel, calling out Bannon as a "champion of white nationalism."

Price's explanation offers a litany of times in the last year that President Donald Trump has demeaned and undermined the work of the intelligence community. Price calls out Trump's refusal to believe that Russia hacked the DNC's emails, the assessment of 17 U.S. intelligence agencies. He also respond's Trump's justification that the CIA was wrong about weapons of mass destruction in Iraq in 2002, saying "the intelligence community had long ago held itself to account for those mistakes and Trump himself supported the invasion of Iraq." 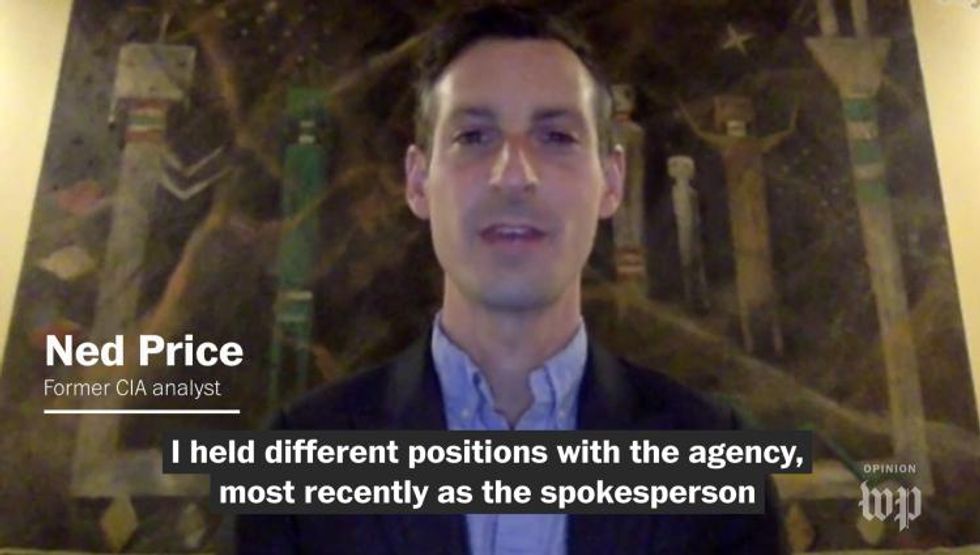 Trump's speech at the CIA on January 21 also contributed to Price's decision to leave. The speech that Trump characterized as being received with a standing ovation, was not a success at bridging the gap between Trump and the CIA according to Price:

Whether delusional or deceitful, these were not the remarks many of my former colleagues and I wanted to hear from our new commander in chief. I couldn’t help but reflect on the stark contrast between the bombast of the new president and the quiet dedication of a mentor — a courageous, dedicated professional — who is memorialized on that wall. I know others at CIA felt similarly.

Trump has blamed the media for the deterioration of his relationship with the intelligence community. In a that same CIA address, he said of reporters, "They are among the most dishonest human beings on earth. And they sort of made it sound like I had a feud with the intelligence community. And just want to let you know that the reason you’re the number one stop is exactly the opposite.”

The core of Price's issue is that "the White House’s inclination was clear. It has little need for intelligence professionals who, in speaking truth to power, might challenge the so-called “America First” orthodoxy that sees Russia as an ally and Australia as a punching bag. That’s why the president’s trusted White House advisers, not career professionals, reportedly have final say over what intelligence reaches his desk."

It seems unlikely that this will change soon.

Ever since becoming one of the first Muslim women to be elected to Congress—an honor she shares with fellow Democratic Representative Rashida Tlaib of Michigan—Representative Ilhan Omar of Minnesota found herself a favorite target of President Donald Trump, his supporters, Evangelical Christians and other assorted bigots and conspiracy theorists.

But just what is it about Omar that they love to hate?

If you were hoping President Donald Trump had improved his reputation abroad, prepare to be disappointed.

The President spent the speech touting the growth of the Indian economy and the continued relationship between India and the United States.

Don Jr. Is Getting Dragged After Claiming 'I Am Not an Elitist' in Instagram Selfie With Trump Fan in Coach

President Donald Trump's eldest son—Donald Trump Jr.—raised eyebrows with a claim that he's not an elitist.

Junior, who oversees his father's business dealings while also campaigning for him, boasted on Instagram that he likes "fishing, hunting, red meat, trucks and guns."

Pundits on every channel and President Donald Trump seem to believe that Senator Bernie Sanders (D-VT), a self-described Democratic Socialist, would be Donald Trump's dream opponent in the 2020 election.

Democrats have expressed concerns that the Senator is too divisive while Trump fans the flames with tweets that the Democratic National Committee is working overtime to rob Sanders of the nomination.

After his conviction for obstructing justice, intimidating a witness, lying to Congress, and other charges, former Trump campaign advisor Roger Stone was sentenced to 40 months in prison earlier this month.

The sentence came after months of drama surrounding the case, including Stone's veiled threats to Judge Amy Berman Jackson on social media, and the Justice Department's decision to override the sentence recommendations of its own prosecutors after Trump criticized them.