The backlash was fast and fierce. 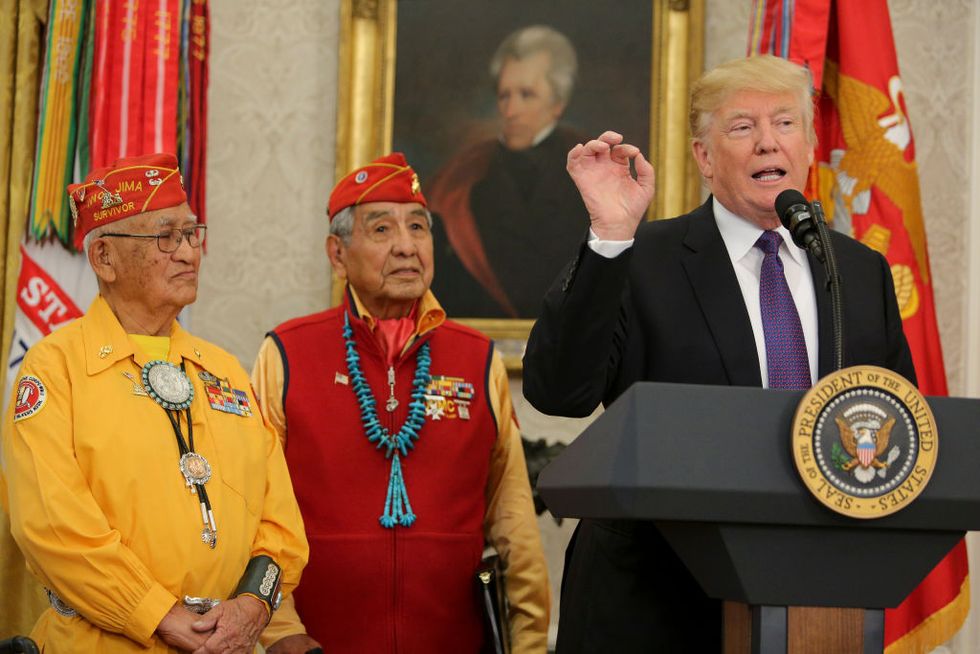 President Donald Trump speaks during an event honoring members of the Native American code talkers in the Oval Office of the White House, on November 27, 2017 in Washington, DC. (Oliver Contreras-Pool/Getty Images)

"The name becomes a derogatory racial reference when used as an insult," Dr. J.R. Norwood, the general secretary of the Alliance of Colonial Era Tribes, said in a statement. "American Indian names, whether they be historic or contemporary, are not meant to be used as insults. To do so is to reduce them to racial slurs."

The purpose of the day’s event was to honor all Indigenous Code Talkers who used their native languages to encode sensitive messages and protect U.S. wartime communications in both World Wars I and II. As pointed out by National Congress of American Indians (NCAI) President Jefferson Keel.

“Today was about recognizing the remarkable courage and invaluable contributions of our Native code talkers. That’s who we honor today and everyday – the three code talkers present at the White House representing the 10 other elderly living code talkers who were unable to join them, and the hundreds of other code talkers from the Cherokee, Choctaw, Comanche, Lakota, Meskwaki, Mohawk, Navajo, Tlingit, and other tribes who served during World Wars I and II."

After reading a prepared speech, President Trump made remarks directly to the Navajo Code Talkers with him.

I just want to thank you because you’re very, very special people. You were here long before any of us were here — although we have a representative in Congress who they say was here a long time ago. They call her Pocahontas. But you know what? I like you. Because you are special.”

Response from Native American groups and leaders was swift.

Navajo Nation President Russell Begaye said "in this day and age, all tribal nations still battle insensitive references to our people. The prejudice that Native American people face is an unfortunate historical legacy."

Marty Thompson, whose Great-Uncle, Dennie Housteen, was a Navajo Code Talker, wants an apology from the president. He let his request known by posting on the “Our Navajo Code Talkers” Facebook page hours after Trump’s inappropriate statement about Pocahontas.

"There were three… Navajo Code Talkers standing and sitting with pride and dignity next to you. But, you Honor and Respect them with a dumb ass, racist, derogatory comment about Pocahontas. Do you even know the true Pocahontas?"

Come on Mr. President, grow up and educate yourself about who Pocahontas was. Then maybe, someone will actually respect you."

"With Respect and Honor for all Navajo Code Talkers and the descendants of Pocahontas’s people," Thompson stated, "I hereby demand an official apology from you regarding your dumb, crude and senseless attempt of a joke during the event."

The identity of the woman the President has used repeatedly as a racial slur drew much of the ire from Native people.

NCAI President Keel concluded his statement with "we honor the contributions of Pocahontas, a hero to her people, the Pamunkey Indian Tribe in Virginia, who reached across uncertain boundaries and brought people together. Once again, we call upon the President to refrain from using her name in a way that denigrates her legacy.”

NCAI made a similar appeal in May 2017. Perhaps this time President Trump will listen.