The Federal Government's Flood Insurance Program May Expire at the End of November, and Some Say That May Be a Good Thing 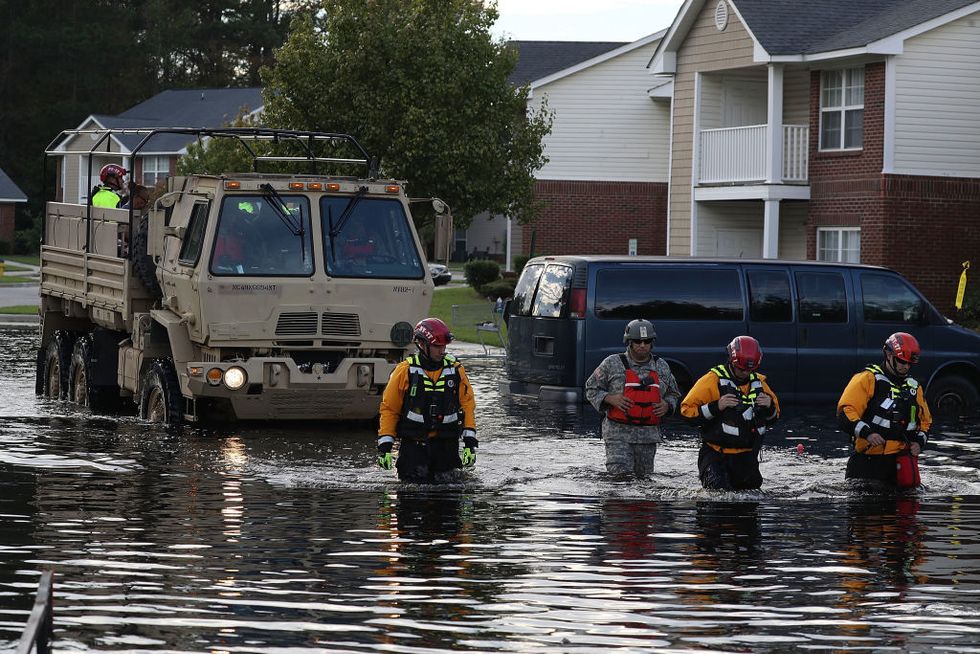 FAYETTEVILLE, NC - SEPTEMBER 18: Members of the New York Urban Search and Rescue Task Force One help evacuate people from their homes on September 18, 2018 in Fayetteville, North Carolina. The Cape Fear river has reached its crest due to rains caused by Hurricane Florence which inundated the area with rain that caused concern for large scale flooding in the North Carolina and South Carolina area. (Photo by Joe Raedle/Getty Images)

Rebuilding after Hurricane Michael could cost upwards of $4.5 billion. That’s nothing: Hurricane Florence is estimated to cost $50 billion. Hurricane Harvey cost $125 billion. In 2017, 16 separate weather events in the U.S., three of which were the costliest storms on record, cost a cumulative $306.2 billion. Who pays? We all do, in the form of tax dollars and higher insurance premiums. As climate change accelerates and sea levels rise, those costs will only continue to break records and weigh upon society.

Some people are questioning the sense of pouring billions into rebuilding efforts in zones that will be targeted again, or that are predicted to be underwater entirely as climate change advances. The Union of Concerned Scientists calculatesthat 300,000 coastal homes are located in areas that will experience chronic flooding or be underwater in the next 25 years.

By the end of the century, around $912 billion worth of residential property, or 2.4 million homes will be impacted by climate change. Coastal communities will ultimately be displaced, as flooding that doesn’t recede after storms forces huge coastal populations to move inland. In the meantime, however, people keep building and rebuilding in floodplains and on fragile coastlines. A year after Hurricane Harvey, one in five new homes in Houston is being built in a floodplain. Even when the future is clear, developers continue to push costly and unsustainable growth in high-risk areas.

The National Flood Insurance Program (NFIP) guarantees government payouts in special flood-hazard areas, leading property owners to rebuild a new home on the same vulnerable site multiple times, knowing they’ll always get bailed out. Some are calling for change, as the program is currently more than $25 billion in debt (in figures that predate the 2018 hurricane season). More than 30,000 properties that are insured under the program are considered “severe repetitive loss properties,” which means taxpayers have paid numerous times to rebuild the same house.

"Any time you see a major flood or devastating event, a lot of times you may see politicians come in and say, 'We're going to rebuild,'" says Chris Hackett, the senior director of personal lines policy at the Property Casualty Insurers Association of America."That may be very popular at the time, but I think it's important to maybe take a moment and think about, is it really the best use of resources to rebuild in this exact location after this disaster struck?"

Now that may change.

The program, which serves more than five million policyholders across the country, is set to expire at the end of November 2018 if lawmakers don’t reauthorize it. Critics of the program say it doesn’t do enough to discourage building in flood zones or to mitigate risk by requiring building standards that would make buildings more able to withstand severe weather and floods. Others say that privatization is the solution. Private insurance companies would be able to do what the government does not: Discourage building in high-risk areas by charging rates that are in proportion to the risks.

However, eliminating the program is politically risky and thus unlikely, with key recipients living in the Carolinas, Florida, Texas, and Alabama. FEMA officials have said that its ongoing mission is to expand this program.

So what’s to be done?

Property owners who hope to withstand the next big storm could invest in hazard mitigation. According to a studyby the National Institute of Building Sciences, every $1 put toward hazard mitigation saves $6 in future disaster costs. After Hurricane Michael raked over Mexico Beach, Florida, just one house was left standing: Attorney Russell King built a five-bedroom beach house designed to withstand “the Big One,” and it did. The house exceeded Florida’s building code, with 40-foot pilings buried deep in the ground, reinforced by steel cables and rebar, breakaway walls, and additional concrete bolstering the corners of the house.

"I believe the planet's getting warmer and the storms are getting stronger," said King, who has declined to share what the extra reinforcement measures cost. "We didn't used to have storms like this. So people who live on the coast have to be ready for it."

Mexico Beach Mayor Al Cathey said the city will be rebuilt, but to a higher standard than before Michael came ashore. “We’re going to lose some of the quaintness that we had, in the old cottage-style houses,” Cathey said. “But we’ll be newer and improved.”

In other words, we will continue to pay for the privilege of living on the beach — whether we live there or not.