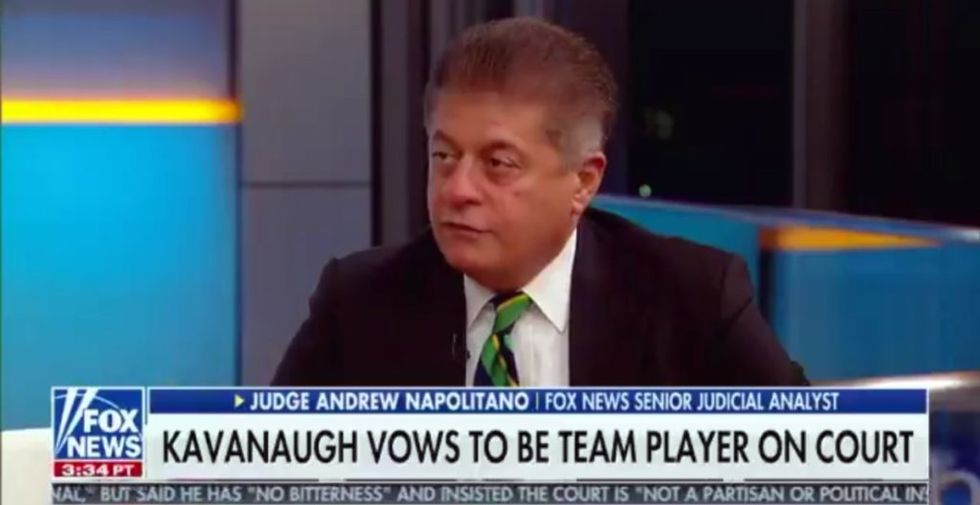 On Tuesday morning, the couch at Fox News Fox & Friends continued to celebrate a win for one of their biggest fans, President Donald Trump. However, Fox News senior legal analyst, former judge Andrew Napolitano, is being accused of raining on their victory parade.

Fox & Friends hosts continued to laud the President for his Supreme Court nominee, Brett Kavanaugh, being confirmed by the Senate and handed a lifetime appointment to the SCOTUS. But Judge Napolitano had criticism for Trump's handling of his post confirmation vote public appearances.

On Monday, Trump told reporters Kavanaugh was the target of “a hoax that was set up by Democrats." During a recent rally, the President brought up Kavanaugh versus the Democrats several times.

Congressional Republicans did the same. Both also floated conspiracy theories that those demonstrating opposition to Kavanaugh were paid protesters.

While Napolitano praised Kavanaugh's statements about the court being an undivided, impartial team of nine, he took exception to the President's continuing to push the Kavanaugh versus the Democrats narrative. Napolitano stated:

"I do not think the best thing that was said was 'evil' or 'hoax,' and I honestly wish that the president and his people would get past that."

"The Supreme Court does not have an army to enforce its rulings. Its rulings depend upon the intellectual legitimacy of the manner in which the rulings are given, from whom they are given."

"They really have some work to do to patch up the divisions that exist in the public mind. These divisions don’t exist in reality in the court."

Napolitano maintained that Trump and congressional Republicans trying to use Kavanaugh's confirmation process to bolster support in the November midterms hurts their new justice's vow to be impartial in the minds of the public.

Fox & Friends host Steve Doocy interjected to justify the partisanship narrative Trump and the GOP are amplifying surrounding their newly sworn in SCOTUS judge. Doocy pointed out the appointment and confirmation process is political.

But Napolitano corrected him by stating all judicial appointments go through a political confirmation process, including his own. Politicians appoint the judges then the political system of elected officials conducts the review and confirmation.

"Once you put that [judge's] robe on, you must be divorced from the politics that got you there and the people that got you there. Because your loyalty is to the Constitution and to the laws, not to the human beings that helped you get your job."

The former judge's point being that the longer the President and GOP leadership portray Kavanaugh as "their guy" against the Democrats and those who protest against his appointment, the more they harm Kavanaugh's reputation and appearance of impartiality.

While Kavanaugh made highly partisan statements of his own during his confirmation process, he attempted to back away from them. He penned an op-ed to that effect and made a vow of impartiality in his public comments since.

However the President and Republicans repeated statements put him in the pocket of the GOP fighting against the Democrats and liberals and not for the Constitution and rule of law.

@revrrlewis @jaketapper I teach my HS juniors about logical fallacies. Trump is guilt of false dichotomy in this in… https://t.co/ublGJuAkYx
— Linda (@Linda) 1539084580.0

@revrrlewis @jaketapper @Judgenap unfortunately the reason why Kavanaugh got the job is because of politics, and it… https://t.co/kWvaKA8FPs
— Democracy wins (@Democracy wins) 1539086974.0

@revrrlewis @joncoopertweets Trump/GOP goal: delegitimize every US institution so that it can be recreated in their… https://t.co/RVdRGdTttB
— Sirena Marbella (@Sirena Marbella) 1539087418.0

@revrrlewis Fox doesn't care about such things as "intellectual legitimacy." Those two words simply do not computer over there.
— tony v. zampella (@tony v. zampella) 1539085889.0

@revrrlewis @joncoopertweets So did McConnell and his refusing to seat Garland and threatening not to seat any just… https://t.co/GEyXFbEkZa
— Lost inram (@Lost inram) 1539087032.0

@revrrlewis The other three on the couch don't even understand the term "intellectual legitimacy". They're looking… https://t.co/XzAyz4eYdl
— Ann Panel (@Ann Panel) 1539086310.0

@revrrlewis @joncoopertweets It has most definitely tainted the Supreme Court. Left a big stain on the SC.
— BARBARA WELMAN (@BARBARA WELMAN) 1539089663.0

@revrrlewis @RosalieVermeire Trump damages our integrity every day. A once great nation in the grasp of a lying con… https://t.co/Q1e4VfP7lI
— nanbon (@nanbon) 1539096912.0

While the rally rhetoric may help Trump drum up midterm election support, it hurts the Supreme Court's reputation as an unbiased arbiter of law.

The midterm elections are slated for Tuesday, November 6, 2018.