Donald Trump Just Absolutely Caved to Nancy Pelosi on the State of the Union Address, and Pelosi Is Making Sure Everyone Knows It 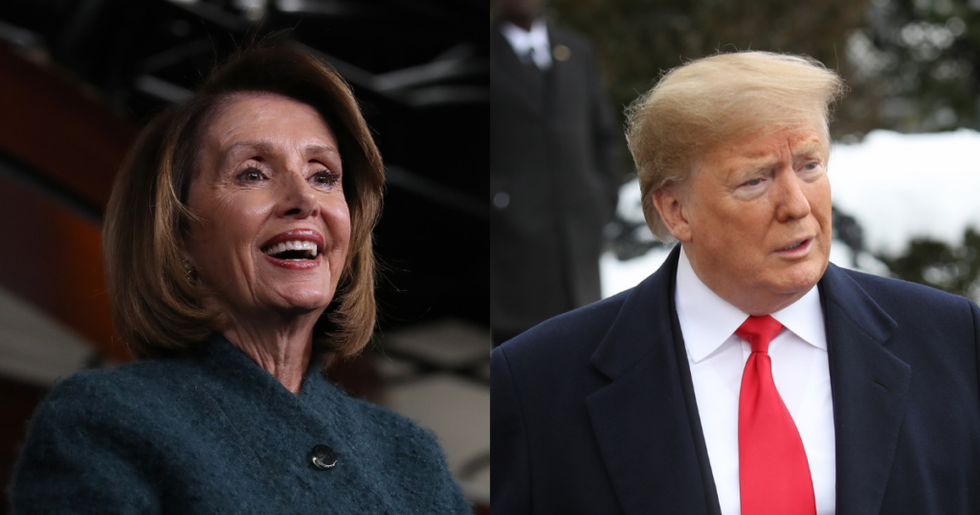 After a terse exchange of letters between him and House Speaker Nancy Pelosi (D-CA), President Donald Trump took to Twitter announcing his intention to postpone the State of the Union until after the shutdown.

The President is right: it is Pelosi's prerogative. In fact, the Speaker didn't "suggest" a later date, but informed him of one on her stationary.

“I am writing to inform you that the House of Representatives will not consider a concurrent resolution authorizing the PResident’s State of the Union address in the House Chamber until government has opened.”

After the President caved, Pelosi used her advantage to demand Trump endorse the House-passed package to reopen the government, which the Senate will vote on against an opposing bill endorsed by Republicans.

Mr. President, I hope by saying “near future” you mean you will support the House-passed package to #EndTheShutdown… https://t.co/YQYvHoR1Jg
— Nancy Pelosi (@Nancy Pelosi) 1548305691.0

Many took the President's acquiescence to mean that Pelosi, who with House Democrats has passed multiple bills to reopen the government, maintains the upper hand. Americans urged her to persist.

@SpeakerPelosi Speaker Pelosi, thank you for fighting for the people who work every day for the United States government.
— midnight toker (@midnight toker) 1548305933.0

They had a different message entirely for Donald Trump.

As if Pelosi hadn't reminded him already, Twitter users informed the President just who he's dealing with.

@realDonaldTrump Translation: You had NO clue what you were in for when Nancy Pelosi became speaker and you LOST.… https://t.co/YiKITMrCpy
— Cathleen Burke (@Cathleen Burke) 1548303811.0

Though it's a victory for everyone that energy, for now, won't be spent on a dispute over the State of the Union as the longest shutdown in American history continues. However, neither bill is expected to pass in the Senate tomorrow.