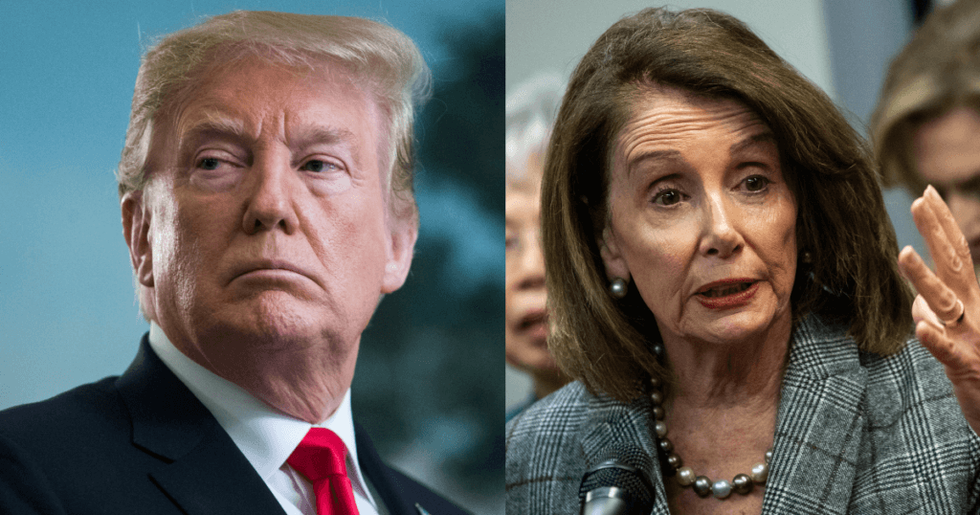 Pelosi had resisted growing calls to begin impeachment proceedings for nearly a year, but when Trump urged Ukrainian President Volodymyr Zelensky to investigate his possible 2020 opponent, former Vice President Joe Biden, Pelosi said that Trump had given the House no choice.

The impeachment inquiry has already yielded some disturbing revelations, and the House is beginning to lay out its case.

The sheet begins with the Ukraine call—which it labels "the shakedown"—and lists multiple quotes from the rough transcript of the call released by the White House itself.

It then goes on to implicate Vice President Mike Pence who reportedly told Ukrainian officials that previously promised military aid due to fears that the country wasn't doing enough to combat corruption. Days later, the phone call between Zelensky and Trump occurred, leading lawmakers to question whether the two were connected.

"Text messages between [the] Ambassadors...paint the picture of a President who waged a months-long pressure campaign to shakedown Ukraine for his own personal political gain, potentially using a White House presidential visit and critical military assistance to Ukraine as leverage."

Among the most damning of the texts is an exchange between Taylor and Sondland:

[9/1/19, 12:08:57 PM] Bill Taylor: Are we now saying that security assistance and WHmeeting are conditioned on investigations?

The final page of the fact sheet details the coverup of the corrupt Zelensky call, citing the whistleblower complaint corroborated by the White House's own transcript of the call. It details efforts to put the full transcript of the call on a separate White House server with a higher security clearance, suggesting officials knew the conversation that took place on the call was corrupt.

"[S]enior White House officials had intervened to 'lock down' all records of the phone call, especially the official word-for-word transcript of the call...the transcript was loaded into a separate electronic system...used to store and handle classified information of an especially sensitive nature."

The fact sheet will undoubtedly prove useful as the inquiry continues with more key players coming forward and more misinformation being lobbed to discredit it.

Pelosi’s “fact sheet” on impeachment is remarkably well done. This is a great way to break it down to the American… https://t.co/NGrnbjWfKl
— Angry Staffer (@Angry Staffer) 1571705245.0

@TeaPainUSA So far, so good. We have to build a compelling case against Trump that the masses will understand and g… https://t.co/9rlAHckZsm
— Jason Baum (@Jason Baum) 1571751146.0

The President and his allies have been hard at work attempting to discredit the inquiry, with Trump using familiar words like "witch hunt" and even comparing constitutional oversight to a "lynching."

“The Democrats are trying to draw out this inquiry because they don’t have the support. Donald Trump is guilty only… https://t.co/ehoKmcYJlV
— Donald J. Trump (@Donald J. Trump) 1571751713.0

Nancy Pelosi only cares about her witch hunt, not working for the American people. It’s time for Pelosi to put the… https://t.co/ubqWA3SAMp
— Ronna McDaniel (@Ronna McDaniel) 1571350739.0

Nancy Pelosi and Adam Schiff have both become embarrassingly dishonest. They, along with the rest of the House Demo… https://t.co/qeagZzqcLQ
— Newt Gingrich (@Newt Gingrich) 1571694256.0

Thankfully, Pelosi's team is laying out the facts.