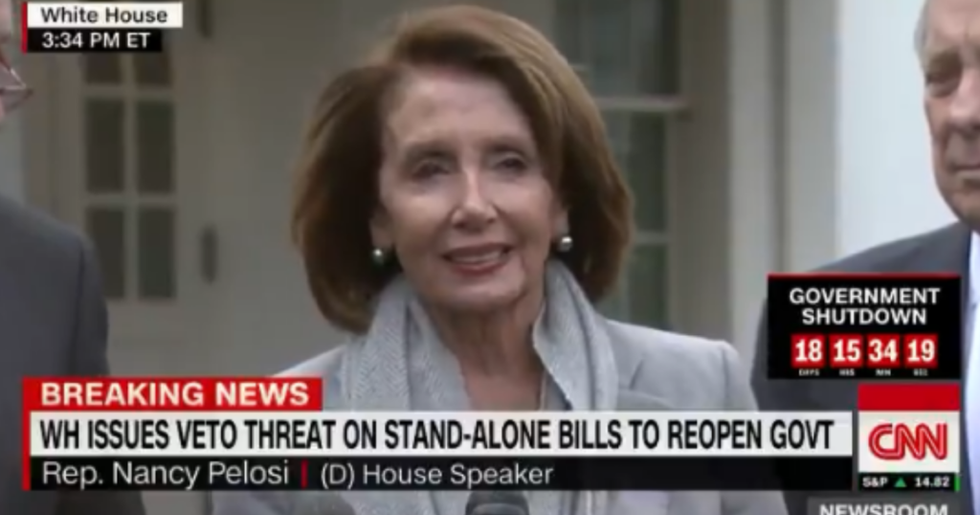 President Donald Trump held a meeting with Congressional leaders at the White House on Wednesday to continue negotiating reopening the federal government, which has been shut down since December 22 over Trump's unyielding demand for a border wall.

Speaking to reporters as she exited the White House, Pelosi offered a blistering rebuke of Trump's obstinance, speaking up for the hundreds of thousands of federal workers who will not receive a paycheck if the government remains closed through Friday.

"The president seems to be insensitive" to the financial woes of the federal workforce, Pelosi said, before taking a huge swipe at Trump and his wealth.

"He thinks maybe they can just ask their father for more money. But they can't."

"If you don't understand financial insecurity," the Speaker added of Trump, "then you would have a policy that takes pride in saying: 'I'm going to keep government shut down for months or years unless you totally agree to my position.'"

oh shit Pelosi on Trump: “He thinks maybe they could just ask their father for more money. But they can’t” https://t.co/JSmaEaoAMh
— Adam Parkhomenko (@Adam Parkhomenko) 1547067589.0

Pelosi dropped a bomb on Trump and Twitter gobbled it up.

After a tumultuous 2018, this is the leadership we need.

Pelosi is serving it, mercilessly.

Pelosi totally got under Trump's skin. The president hopped onto Twitter after abruptly leaving the meeting to whine about not getting his way.

"Just left a meeting with Chuck and Nancy, a total waste of time," Trump wrote. "I asked what is going to happen in 30 days if I quickly open things up, are you going to approve Border Security which includes a Wall or Steel Barrier? Nancy said, NO. I said bye-bye, nothing else works!"

The next step, Trump and others within his administration have suggested, is to declare a state of national emergency in order to build his wall. The questionable constitutionality of such a move, however, is unlikely to dissuade the president from attempting an unprecedented power grab.

Only Trump could back himself into a corner in an Oval Office, but the danger he poses continues to grow.