Senator Lisa Murkowski Just Explained Why She Voted 'No' to Proceed to a Vote on Brett Kavanaugh, and People Are Cheering 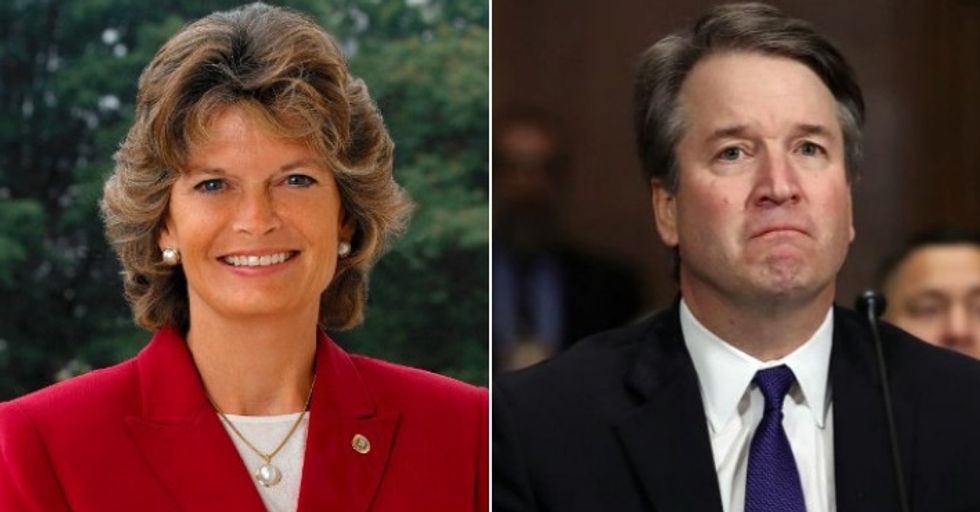 On Friday, the Senate took a procedural vote to end debate on Brett Kavanaugh—President Donald Trump's nominee for the Supreme Court—setting the stage for a final vote to confirm or deny Kavanaugh a lifetime position on the SCOTUS Saturday. The vote was 51 for and 49 against.

Democrat Joe Manchin of West Virginia—who seeks reelection in November—voted yes. However one Republican whose term ends in 2022 voted no.

Senator Lisa Murkowski of Alaska defended her decision to vote against advancing Kavanaugh's nomination by stating,

"In my view, he's not the right man for the court at this time."

The other two Senators, Jeff Flake of Arizona and Susan Collins of Maine, voted yes on advancing the nomination. Flake announced he would also vote yes on Saturday. Collins made her final position clear later Friday when she announced she also would vote yes.

Murkowski spent the time before the vote speaking with constituents.

Native votes helped Murkowski win as a write-in candidate in 2010 after she lost the Republican primary to a tea party candidate.

Alaska Native groups made clear their stance on Brett Kavanaugh. For them, he was a definite no for a lifetime position on the Supreme Court.

Advocates for Alaska Natives had concerns with the judge’s record on climate change, voting rights and fishing rights. Tribal communities who rely on subsistence fishing in protected federal waters feared the conservative judge could destroy their way of life.

Heather Kendall-Miller, an Alaska Native and an attorney with the Native American Rights Fund, said:

"This would be a death knell to us in Alaska, absolutely. If this goes down, Alaska will be in a state of chaos when the fishing season begins. There will be lots of civil disobedience. It will be explosive."

Murkowski and Maine Senator Collins also received pressure for Women's rights groups. Both Senators claim to be pro-choice and pro-equality.

Women's advocacy groups do not see Kavanaugh as supporting the rights of women.

Murkowski calls Kavanaugh an empty suit spoiled brat, given everything he has by his Dad (the governor) appointing… https://t.co/7xSskSUFLO
— Ann Coulter (@Ann Coulter) 1538756152.0

But more than a few people had responses for Coulter's statement.

@AnnCoulter That's so ridiculous. Perhaps you forgot how she went on the win a full term as a write in candidate, I… https://t.co/vvRWBirV7v
— Will Anderson (@Will Anderson) 1538759067.0

While others echoed Murkowski's belief that Kavanaugh is not right for SCOTUS in 2018.

The Senate plans to vote on Kavanaugh's lifetime appointment Saturday.