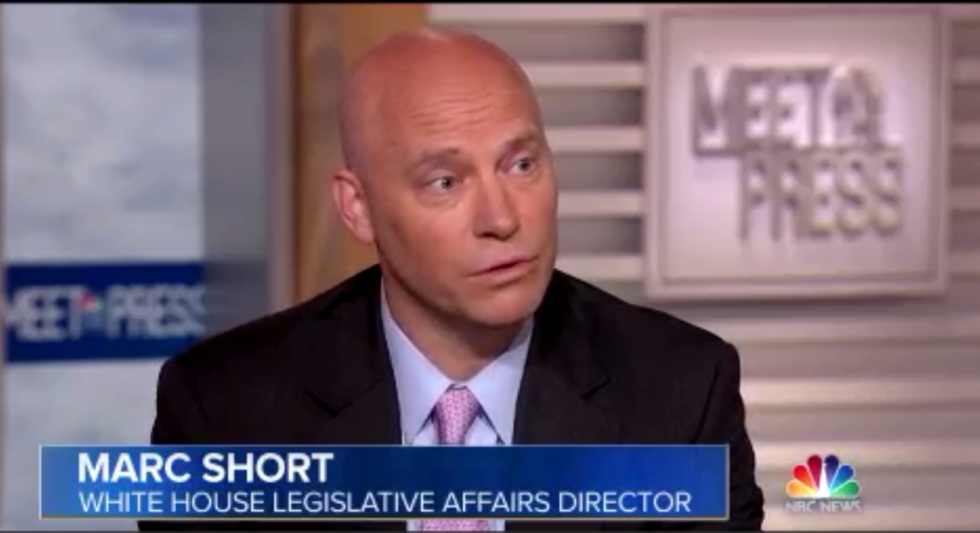 On Sunday, on NBC's Meet the Press, the White House Director of Legislative Affairs and Assistant to the President, Marc Short, stated the Trump administration's doubts about the legitimacy of a Special Counsel appointed to head the Russia investigation.

Short was specifically responding to a question about a Tweet made by President Donald Trump on Friday. In his Tweet, the president seemed to question whether a "Special Council" (sic) should exist if former FBI director James Comey was involved in any part of the process.

In response to host Chuck Todd's questions about the meaning of the president's Tweet, Short stated,

I think the president expresses a lot of frustration with where the special counsel investigation is."

When asked about the scope of the investigation into Russian interference in the 2016 presidential election and possible collusion with members of the Trump campaign and administration, Short said,

I think that we all have frustrations that we believe that the scope has gone well beyond what was intended to be investigations into meddling in the election. And I think that the House and Senate have had their own investigations. The House has completed those. We’re anxious for the Senate to complete its."

Short also made reference to a previous Special Counsel that investigated President Bill Clinton. However Short did not address one major difference between the two situations when raising the issue of congressional investigations precluding a need for a Special Counsel.

During the period of the Clinton presidency Short references, Republicans, the party of the opposition controlled both houses of Congress. Trump's own party, not the opposition, would lead any congressional investigations.

The concluded Republican led House of Representatives investigation, that Short referred to in his remarks, was widely criticized for being subject to partisan politics, including by some members of the majority party. The Senate's ongoing investigation has drawn similar backlash.

Based on the president's Tweets, Meet the Press host Chuck Todd asked about the future for Special Counsel Robert Mueller and Deputy Attorney General Rod Rosenstein, the man who appointed Mueller after an investigation into potential Russian interference and collusion was deemed necessary.

The president's assertion that the Special Counsel exceeded the scope of their investigation lacks support from at least one prominent Republican.

Appearing on the same program, Maine Republican Senator Susan Collins stated Mueller proved to be maintaining the proper focus when he handed off information about possible criminal activity by Trump's personal lawyer, Michael Cohen, to federal prosecutors in New York, with the blessing of Rosenstein, instead of including it in his own investigation.

“I believe he’s staying within the parameters,” Collins remarked regarding the scope of Mueller’s investigation.

The president has been firing off a flurry of Tweets leading up to and since the release of James Comey's memoir, A Higher Loyalty: Truth, Lies, and Leadership. Many of those Tweets also take a jab at the Russia investigation and Robert Mueller's office.

The president's outbursts related to Comey's book release drew considerable criticism of their own.