We Now Know How Donald Trump Jr. Escaped Being Charged for That 2016 Trump Tower Meeting, and It's Actually Kind of Sad 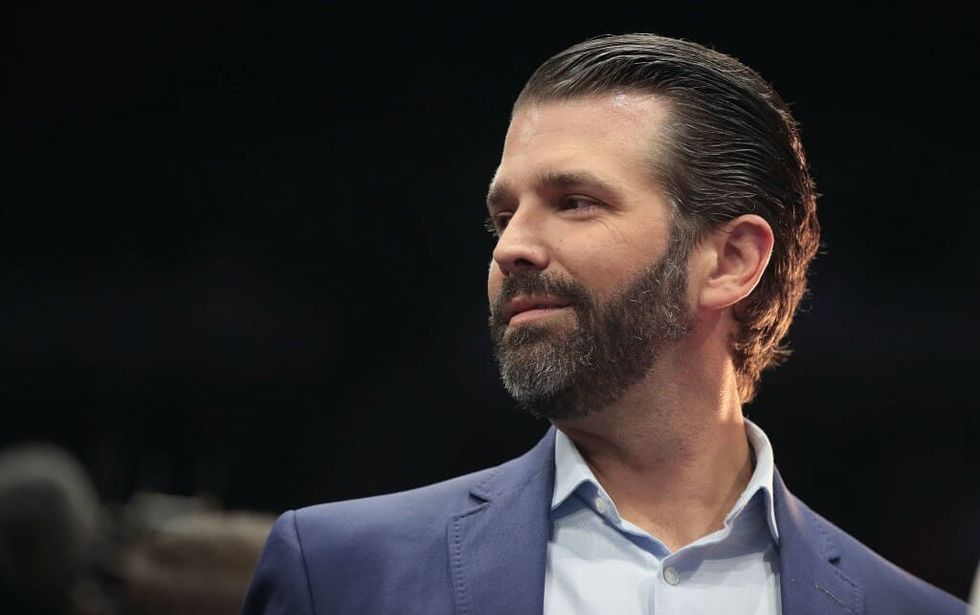 Donald Trump Jr. talks to the press before the arrival of his father President Donald Trump during a MAGA rally on March 28, 2019 in Grand Rapids, Michigan. (Photo by Scott Olson/Getty Images)

Now that the redacted version of the Mueller report is available, people are carefully reviewing the contents. But while some members of the Trump administration and the Trump family are celebrating, people reading the report think those sentiments are premature or misguided.

But people who read the report are wondering if Don Jr. really wants to confirm the findings. While laws were definitely bent, proving Don Jr. was intelligent enough to know was a bridge too far according to Robert Mueller.

@DonaldJTrumpJr You were vindicated because they determined you were too stupid to know what’s going on. So congrats on being a dumbass.
— Rage Donkey™️ (@Rage Donkey™️) 1555604585.0

According to the report from the investigation into Russian interference in the 2016 presidential election by Special Counsel Robert Mueller:

"This series of events [surrounding the June 9 meeting] could implicate the federal election-law ban on contributions and donations by foreign nationals . . . Specifically, Goldstone passed along an offer purportedly from a Russian government official to provide 'official documents and information' to the Trump campaign for the purposes of influencing the presidential election."

"Trump Jr. appears to have accepted that offer and to have arranged a meeting to receive those materials. Documentary evidence in the form of e-mail chains supports the inference that Kushner and Manafort were aware of that purpose and attended the June 9 meeting anticipating the receipt of helpful information to the Campaign from Russian sources."

"Taking into account the high burden to establish a culpable mental state in a campaign-finance prosecution and the difficulty in establishing the required valuation, the Office decided not to pursue criminal campaign-finance charges against Trump Jr. or other campaign officials for the events culminating in the June 9 meeting."

On June 9, 2016, Don Jr, Jared Kushner, and then-campaign chairman Paul Manafort met with Russian lawyer and government operative Natalia Veselnitskaya at Trump Tower. They later lied about the purpose of the meeting with input from President Trump.

"The Office ultimately concluded that, even if the principal legal questions were resolved favorably to the government, a prosecution would encounter difficulties proving that Campaign officials or individuals connected to the Campaign willfully violated the law."

People largely agreed with the assessment of why Don Jr was not charged more so than the alternative.

Few people bought the story of completely exonerated or total innocence the Trump camp was selling since the conclusion of Muller's investigation.

While some crimes require only an action be taken, others require the criminal to "willfully and knowingly" take the action. The investigation clearly established Don Jr's actions, but Mueller opined that proving Don Jr was not ignorantly committing illegal acts was too difficult.

My favorite thing in maybe forever may be Robert Mueller deciding @DonaldJTrumpJr was too stupid to realize he was… https://t.co/ontEKhQILh
— Randi Mayem Singer (@Randi Mayem Singer) 1555605907.0

Although some had an important question about the decision to not prosecute Donald Trump Jr:

The eventual fallout from the report, and if Congress will see the non-redacted version, remains to be seen.