1 Year In, Trump Claims the Mueller Probe Is a 'Witch Hunt,' But CNN Has the Receipts 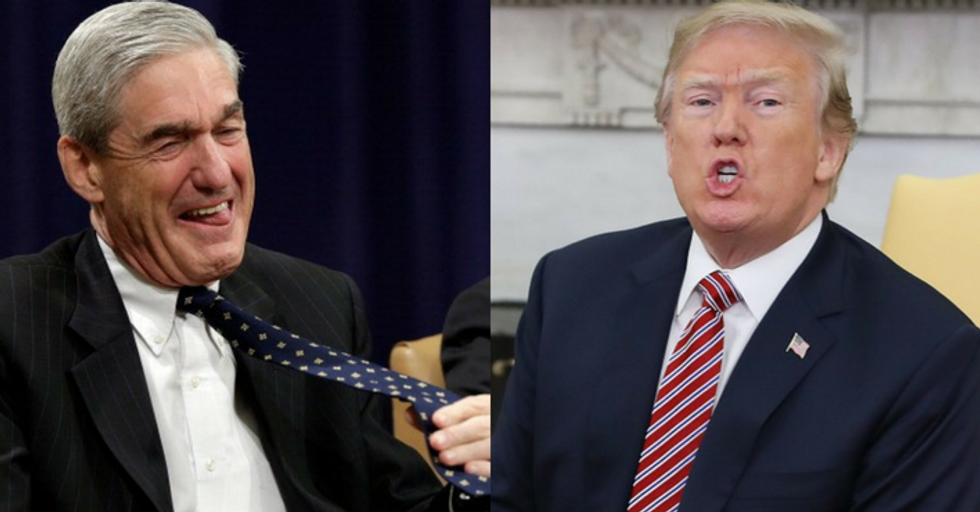 Last year, the United States Justice Department, headed by Attorney General Jeff Sessions decided to conduct a more thorough investigation into Russian interference in the 2016 presidential election and any ties to the campaign of President Donald Trump. This move came after investigations led by the Federal Bureau of Investigation (FBI) and in the House and Senate and the high profile firing of the FBI director, James Comey, by the president.

Trump administration member AG Sessions recused himself from the investigation, turning it over to another Trump appointee, Rod Rosenstein. Rosenstein decided to appoint former FBI director Robert Mueller as Special Counsel exactly one year ago today. All three men are lifelong Republicans.

Trump mocked and  ridiculed the investigation from the beginning and continues to do so, referring to it as a "witch hunt" or a "hoax" perpetrated by Democrats. The president marked the anniversary of Mueller's appointment with another series of mocking tweets.

Congratulations America, we are now into the second year of the greatest Witch Hunt in American History...and there… https://t.co/YOAAfBRwLu
— Donald J. Trump (@Donald J. Trump) 1526556489.0

Despite the disgusting, illegal and unwarranted Witch Hunt, we have had the most successful first 17 month Administ… https://t.co/pVP7wCPj8M
— Donald J. Trump (@Donald J. Trump) 1526565164.0

The president made the same claim—greatest witch hunt in American history—one day after the special counsel appointment occurred.

But is it really a witch hunt or a hoax? Has the investigation bore no fruit? CNN doesn't think so and they've been kind enough to break it down, by the numbers, for us all.

19 is the number of individuals with charges brought against them because of the investigation. 3 companies also were subject to charges.

75 is the number of criminal charges they face. Charges encompass bank fraud and tax violations, lying to FBI investigators, identity fraud and conspiracy against the United States.

1 person who plead guilty, Alex van der Zwaan, guilty of lying to the special counsel, is already serving a prison sentence for the crime.

1 person, Paul Manafort, chose to fight the Justice Department's charges in court. Manafort was chairman of the Trump 2016 presidential campaign.

Meanwhile, at least 40 people voluntarily spoke to the Office of the Special Counsel and at least 7 went before a grand jury.

Despite the mounting numbers of charges and indictments, the first occurring 5 months into the probe, Trump has used the phrase "witch hunt" to refer to the Russia investigation 39 times. Twitter users provided some feedback for him about that claim.

Since Mueller's appointment, nearly 20 individuals have been charged with crimes, including 5 who pleaded guilty (a… https://t.co/jicEhx7WnF
— MSNBC (@MSNBC) 1526561918.0

@kylegriffin1 I see the Grand Wizard is complaining about the witch hunt again. He must be feeling the heat.
— Troy Mooring (@Troy Mooring) 1526557378.0