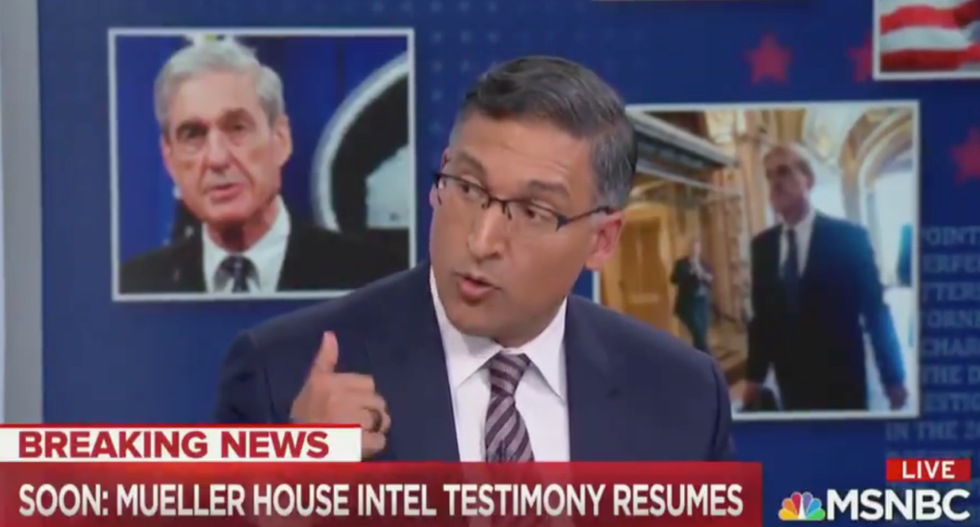 Former Special Counsel Robert Mueller's hotly-anticipated testimony to the House Intelligence and House Judiciary Committees regarding Russian interference in the 2016 election lasted nearly seven hours, but legal expert and MSNBC commentator Neal Katyal summed up some of the most damning moments in under a minute.

While the brunt of Mueller's testimony was already noted in his 400+ page report on the Trump campaign's contacts with Russia and Donald Trump's attempts to obstruct Mueller's investigation, many Americans were hearing some of the statements for the first time.

Katyal pointed out five elements of the report and Mueller's subsequent testimony on MSNBC's coverage of the hearings.

While Republicans widely claim that the Special Counsel investigation found "no evidence" of conspiracy with Russia, the report actually claims that it couldn't establish sufficient evidence.

Katyal pointed out that Russia offered help which campaign staff—including the President's son, Donald Trump Jr.—welcomed. What's more, the president was working on a deal to build a Trump Tower in Moscow, despite previously denying any business dealings in Russia.

Katyal elaborated on what this means:

"Those five things together are a devastating portrait...You wouldn't want a CEO, you know, target or something to have that, but let alone the President of the United States to have these accusations."

Many think Katyal didn't have to stop at five either.

Many praised Katyal for his analysis and House Intelligence Committee Chairman Adam Schiff (D-CA) for his efficient line of questioning, which Katyal credited with painting the "devastating picture."

While there were few revelations from Mueller's testimony not already included in the report, many Democrats hoped his statements would bolster calls for impeachment, possibly swaying more reticent Democrats to support commencing hearings.

As Katyal pointed out, the information in the report paints an insidious picture.

There is enough in today's #MuellerDay hearing to start impeachment inquiry because there was always enough bad beh… https://t.co/Ud0nZhElFn
— Zerlina Maxwell (@Zerlina Maxwell) 1563996227.0

The politics of this are frustrating. Let’s focus on the substance - Mueller found that Russia attacked America, Tr… https://t.co/hSXqd43IlD
— Barb McQuade (@Barb McQuade) 1563979856.0

Mueller has confirmed that he didn’t charge Trump with a crime because you can’t indict a sitting president, and th… https://t.co/ucygW6eSa1
— Jon Favreau (@Jon Favreau) 1563980485.0

I read the Mueller report the day it came out. Three things were clear: A hostile foreign government attacked our 2… https://t.co/OXt6xUL8hK
— Elizabeth Warren (@Elizabeth Warren) 1563982874.0

Q: "You believe that you could charge the president of the United States with obstruction of justice after he left… https://t.co/hrV7emaOhd
— Jon Cooper 🇺🇸 (@Jon Cooper 🇺🇸) 1563986159.0

Some have cautioned that launching impeachment proceedings could prove politically fatal for Democrats in 2020. The 91 Democratic lawmakers calling for proceedings to begin, however, emphasize that Congress should focus on its duty of oversight rather than political palatability.

While Katyal pointed out the information laid bare in the report, it appears today's hearing resulted in even more questions as to what comes next.

If you'd like your own hard copy of the Mueller Report, it's available for purchase here.