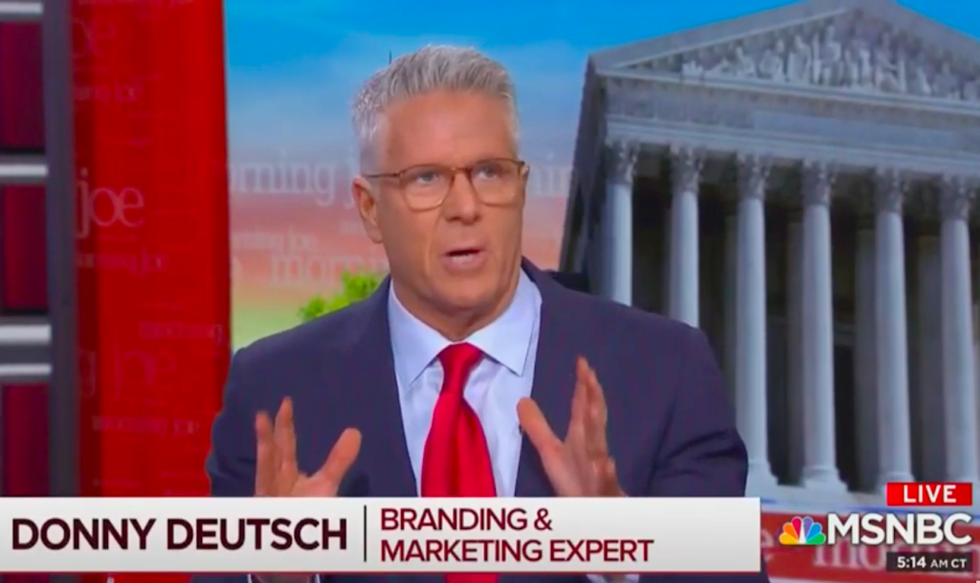 If there is one thing everyone agrees is a strong talent for President Donald Trump, it is propaganda. The President understands branding, rebranding and the power of repetition to change the narrative.

Someone else who understands rebranding is MSNBC host Donny Deutsch of Saturday Night Politics. Deutsch—a former advertising executive—stated on MSNBC's Morning Joe that rebranding impeachment is the key for Democrats.

The MSNBC correspondent suggested Democrats stop talking about impeachment and instead focus on criminal activity.

"We know Trump broke the law. Here’s the answer, you take it from a binary choice of two lanes, you create a third lane. You take the word impeachment, and you change it to criminal activity."

His suggestion drew mixed reactions from the other members of the Morning Joe panel. Republican strategist Susan Del Percio responded:

"Here is the problem, though, where are they going to go with it, Donny? At the end of the day, it’s either impeachment or not. You can brand it the way you want, but there is a constitutional responsibility at stake, and a lot of Americans are okay with seeing them step up and fight for what’s right."

As with President Trump's own efforts to alter the narrative through repetition—like "no collusion" or "fake news"—the issue is some people will always see through rebranding efforts. And sometimes people outright reject the rhetoric creating pushback against both the original idea and the new alternative.

@Morning_Joe @DonnyDeutsch #YESobstruction Despite Trump refusing to be interviewed, #Mueller found so much other e… https://t.co/BgnYjREN1B
— Reader Adrift (@Reader Adrift) 1559306026.0

Deutsch specifically said he hoped Democratic leaders Speaker of the House Nancy Pelosi and Senate Minority Leader Chuck Schumer were listening. Neither has yet indicated if they were.