Someone Asked What If the Starr Report Had Been Given to Clinton's Attorney General to Summarize, and Monica Lewinsky Just Had the Most Relatable Response 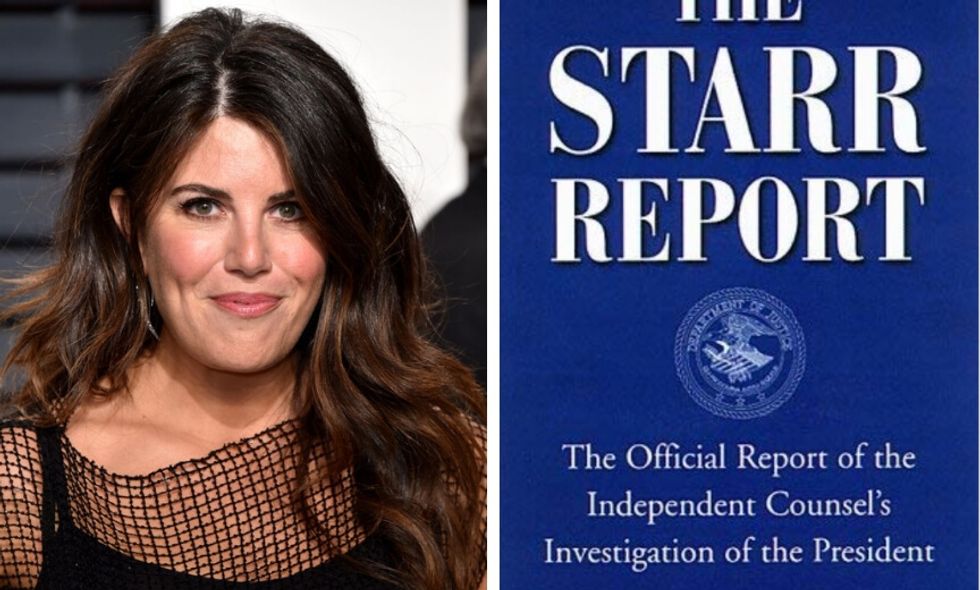 Though the 90's may seem like a distant memory to most, for some—like Monica Lewinsky—the decade is all too vivid.

News of then-President Bill Clinton's sexual relationship with Lewinsky while she was a White House intern became public in 1998. Lewinsky was harassed and mocked by a country that suddenly had intimate knowledge of a deeply personal facet of her life—one that would define her to the public for decades.

Attorney Kenneth Starr was the independent counsel who investigated the scandal. Starr's subsequent report concluded that Clinton committed perjury when testifying under oath that he had not had sexual relations with Lewinsky. This proved to be enough to spur decade-defining impeachment proceedings against Clinton.

Flash forward to the delivery of the Mueller Report to Attorney General William Barr last week, which Barr summarized in four pages and delivered to Congress on Sunday. Calls for the report to be made public are growing, but it reportedly won't be released for weeks despite claims from the Trump camp that it is a "total and complete exoneration" of the President.

USC law professor Orin Kerr wondered what would've happened had the current standard been applied in the Clinton era.

Imagine if the Starr Report had been provided only to President Clinton's Attorney General, Janet Reno, who then re… https://t.co/UjsIrheIRp
— Orin Kerr (@Orin Kerr) 1553656925.0

And you'll never guess who responded.

Lewinsky has reclaimed her narrative in the past decade, using her experience during the Clinton era to become an anti-bullying activist, women's advocate, and motivational speaker.

People were certainly motivated upon seeing her response to Kerr.

@MonicaLewinsky The way you have handled yourself all these years is quite literally unbelievable. Props to you, wh… https://t.co/rCjJ5oGsIp
— I’m Just Dan D (@I’m Just Dan D) 1553663052.0

Though the Mueller Report remains secrets, Republicans sold hardback copies of the Starr Report to the public in the 90's.

Barr's concealment of the full Mueller report has frustrated many.

Barr's summary said that Mueller couldn't establish collusion between the Trump campaign and Russian operatives—not that Mueller found no evidence of it. However, until the public sees the full report, it's impossible to gauge how important that distinction is.

We don't even know how many pages it is—crucial knowledge that could give clues to the breadth of  information it holds.

Amazing that so many conclusions are drawn on all sides when we don't even know how many pages there are in Mueller… https://t.co/ke1hr86IcL
— Taylor Branch (@Taylor Branch) 1553610600.0

The White House will also reportedly get a chance to claim "executive privilege" over parts of the report.

It seems to me that redacting the #MuellerReport in the name of “executive privilege” would constitute “obstruction… https://t.co/kZWZYLoIYz
— Adam Weitzman (@Adam Weitzman) 1553691071.0

Interesting how much has changed.