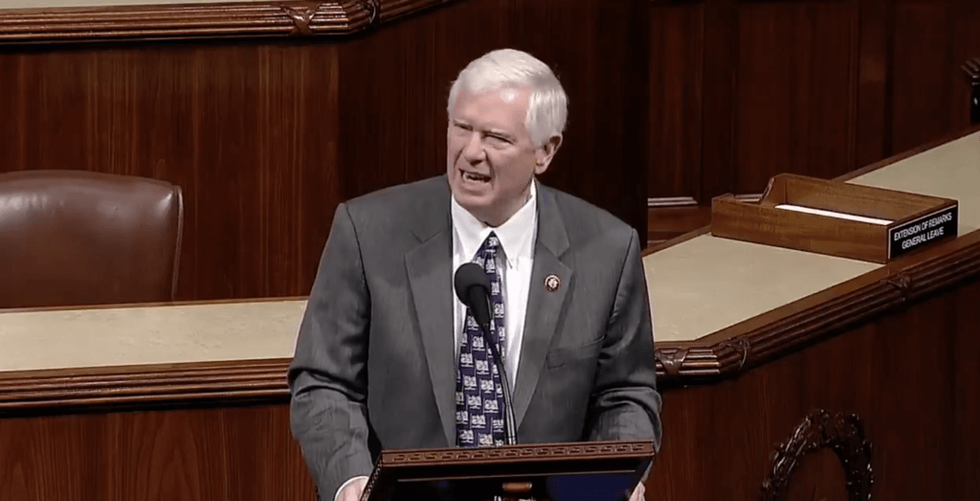 On the floor of the House of Representatives, Congressman Mo Brooks (R-AL) railed against Democrats and the media in the wake of Attorney General William Barr's summary of the Mueller Report, which asserted that Special Counsel Robert Mueller couldn't establish collusion between President Donald Trump's 2016 campaign and Russian operatives.

Brooks attempted to paint Democrats as evil masterminds and socialist liars, comparing them to Nazis.

To establish the ill-conceived metaphor, he read from the genocidal dictator Adolf Hitler's manifesto, Mein Kampf. The passage described what Hitler called the Big Lie: a propaganda technique in which a leader tells lies so outrageously false that the populace believes they're true, because surely no one would tell a lie that colossal.

Others thought so too.

@adamcbest GOP rule 1: accuse your opponents of everything you are currently doing.
— Chris Clunie (@Chris Clunie) 1553619823.0

In his first two years, the President whom Brooks was defending made 8,158 false claims (and counting), his attorney said on television that "truth isn't truth," and Trump himself has promised supporters, "What you're seeing and what you're reading is not what's happening."

The irony of Brooks's claim aside, many were horrified at another aspect.

One of Mein Kampf's most infamously anti-Semitic passages will now be in the Congressional record.

Trump repeated his claims that Democrats are "anti-Israel" and "anti-Jewish," ahead of his meeting with Israeli Pri… https://t.co/8zWoTRHcHu
— POLITICO (@POLITICO) 1553263712.0

After Brooks' antics, many are finding that claim even more preposterous.