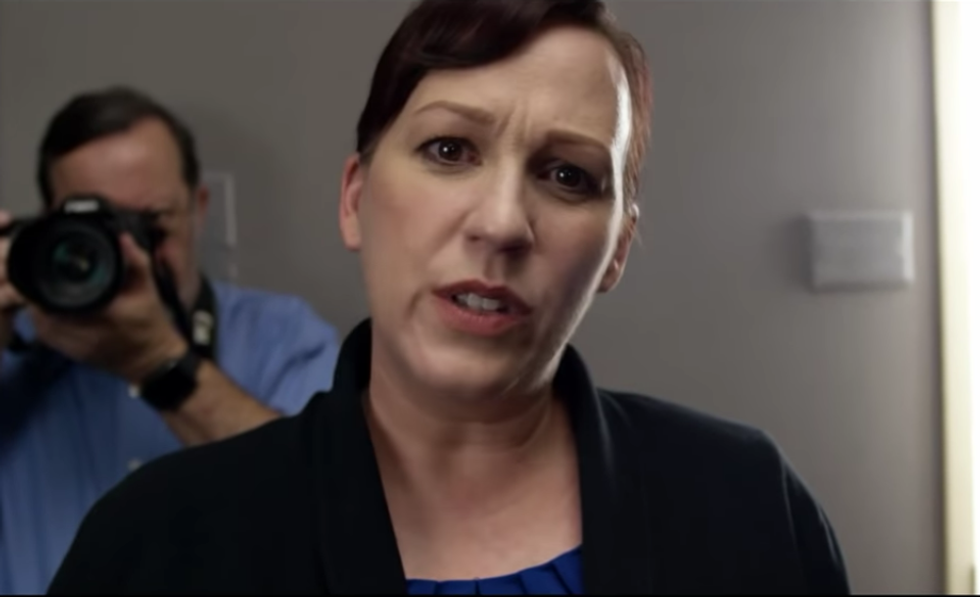 Despite her accomplishments, being one of only two women to win the Distinguished Flying Cross with Valor, and her autobiography, Shoot Like a Girl: One Woman's Dramatic Fight in Afghanistan and on the Home Front, Hegar still needs to be properly introduced to voters.

And she's done it in a big way. Hegar's campaign ad all about the doors in her life —those she's walked through, had slammed in her face and kicked down— is quickly going viral.

In the 3 1/2 minute video, Hegar tells of her early life, her aspirations, and how she worked her way through the ranks to achieve her dream of being an Air Force pilot. Hegar served as a Major in the US Air Force and Air National Guard and was honorably discharged after completing three tours of duty in Afghanistan.

But she also talks about the doors that closed to her after the Medevac helicopter she flew in Afghanistan was shot down and, due to her injuries, she was barred from flying and then, because of her gender, barred from her next military career path choice.

During her fight to gain access to previously barred career paths for women in the military, Hegar knocked on a lot of doors in Washington DC, asking for the time of her elected officials.

But many of those doors were closed in her face, according to Hegar. Not because her representatives disagreed with her, but because she wasn't holding a check.

Just as she took on the Pentagon in 2012, Hegar now wants to take on John Carter, the Republican representative for her congressional district in Texas. Hegar says an elected official's door should be open to all constituents, not just big money donors.

And her message of opening doors reverberates throughout her campaign.

My whole life has been about opening, pushing, and sometimes kicking through every door in my way."

Ready for a Congress that opens doors for Americans instead of slamming them in our faces?"

That style of plain talk is why Hegar's campaign ad is so effective as well. She spells out who she is and where she is coming from and why she has decided to run for office in a frank manner that resonates with people.

"As an Air Force officer, I swore an oath to support and defend the Constitution of the United States against all enemies, foreign and domestic," Hegar states on her website homepage.

Divisive policies that isolate us from the world with no consideration for our history of religious freedom, welcoming immigrants, supporting our allies, and fulfilling our promises pose a threat to the very ideals upon which our country and our Constitution were founded. It’s time we stop simply voting down party lines and start electing strong, reasonable, solution-oriented citizens."

Holy moly this is AMAZING! Everything about it. Whoever wrote and directed this is a genius. And MJ Hegar is pretty… https://t.co/uCghiM0Cgk
— david cross (@david cross) 1529590220.0

Not only is this the single most effective campaign ad I have ever seen, this woman also sounds extraordinary. Texa… https://t.co/1zaq0R0n1t
— Amber Tamblyn (@Amber Tamblyn) 1529602305.0