Mitch McConnell Just Admitted What He Hopes Republicans Will Do If They Win Enough Votes in the Senate, and Democrats Are Using His Words Against Him 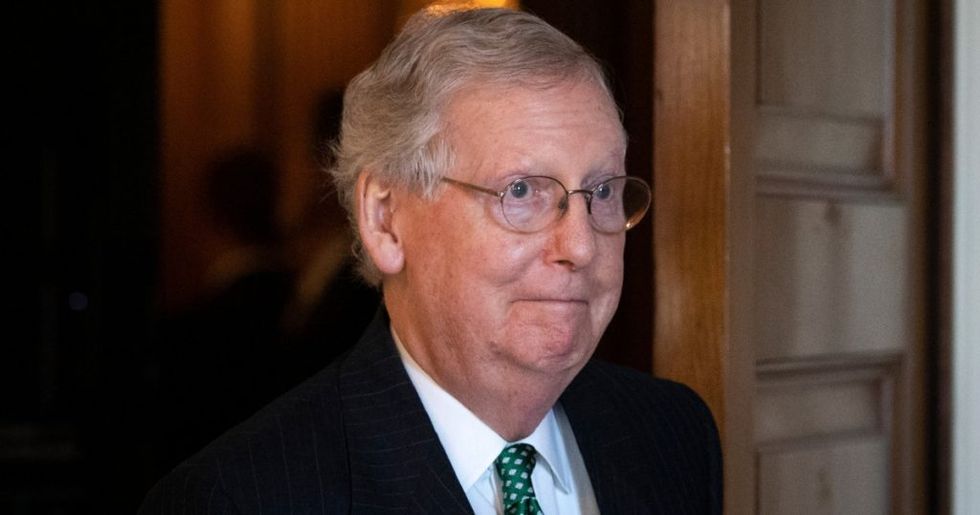 Senate Majority Leader Mitch McConnell (R-KY) said on Wednesday that if Republicans maintain control of Congress after the midterms, they will once again attempt to repeal Obamacare.

“If we had the votes to completely start over, we’d do it. But that depends on what happens in a couple weeks," McConnell said. "We’re not satisfied with the way Obamacare is working.”

McConnell referred to the GOP's failed crusades to repeal the health care law as “the one disappointment of this Congress from a Republican point of view."

Considering polls show healthcare at the top of voters' concerns this year -- and Democrats around the country are running on preserving it -- this is seen as an opportunity for Democrats less than three weeks out from election day.

if Democrats don't make this into every single ad between now and the election they are committing political malpra… https://t.co/x81Tv7bTw4
— Sarah Jaffe (@Sarah Jaffe) 1539808198.0

And in fact Democrats wasted no time in pouncing on McConnell's words.

“If Republicans retain the Senate they will do everything they can to take away families’ health care and raise their costs,” Senate Minority Leader Chuck Schumer (D-NY) said in a statement. “Americans should take Senator McConnell at his word.”

Other Democrats both inside and outside of the Senate sounded the alarm.

The GOP wants to try again to kick tens of millions of Americans off of their health insurance, strip away protecti… https://t.co/IFD6elk9js
— Kamala Harris (@Kamala Harris) 1539803724.0

Want another reason to turn out in November and vote for Democrats? Mitch McConnell is admitting that Republicans w… https://t.co/uH9e4XphJ3
— Jeff Merkley (@Jeff Merkley) 1539822259.0

Americans deserve fully-funded Medicare, Medicaid, and Social Security both because living with dignity should be a… https://t.co/lZrot6jyeq
— Ed Markey (@Ed Markey) 1539814488.0

McConnell also plans to go after Social Security, Medicare, and Medicaid, which he calls "entitlements," as a means of reducing the federal budget deficit.

The spending shortfall has ballooned to nearly $800 billion because of the massive tax cut passage passed late last year, spending increases, and rising interest payments on the national debt.

McConnell claimed last year that the tax cuts would pay for themselves.

Now that the tax reductions have exploded the deficit, however, McConnell is taking aim at social safety nets.

“It’s disappointing, but it’s not a Republican problem,” McConnell said Tuesday in an interview with Bloomberg News. “It’s a bipartisan problem: unwillingness to address the real drivers of the debt by doing anything to adjust those programs to the demographics of America in the future.”

He added that it would be "very difficult to do entitlement reform, and we’re talking about Medicare, Social Security and Medicaid."

“I think it’s pretty safe to say that entitlement changes, which is the real driver of the debt by any objective standard," McConnell said, "may well be difficult if not impossible to achieve when you have unified government."

McConnell reaffirmed his position in an interview with Reuters.

“We all know that there will be no solution to that, short of some kind of bipartisan grand bargain that makes the very, very popular entitlement programs be in a position to be sustained. That hasn’t happened since the ‘80s,” McConnell said. “But at some point we will have to sit down on a bipartisan basis and address the long-term drivers of the debt.”

McConnell's comments have supporters of the ACA and those that oppose cutting social programs extremely nervous.

Democrats a pressing the issue hard.

For years, the GOP have whined about the deficit. Then late last year, they exploded it with their $1.5 trillion… https://t.co/r8HSEzsGhs
— Elizabeth Warren (@Elizabeth Warren) 1539804013.0

This is a direct attack on our seniors. Medicaid and Social Security aren't "entitlements," they are earned benefi… https://t.co/ZseUX7RVTF
— Andrew Janz (@Andrew Janz) 1539745392.0

This is their strategy: blame others, blame anything but their actions or votes. Republicans in Washington are ad… https://t.co/fT1InKwaAG
— Nancy Pelosi (@Nancy Pelosi) 1539713684.0

If Republicans maintain control of the House and Senate they will try to repeal Obamacare again and attack Social S… https://t.co/ziSLboBh8a
— Eric Holder (@Eric Holder) 1539811853.0

Republicans have spent 8 years trying to repeal the ACA. When they say they haven't given up on it, you should tak… https://t.co/oXJJvlX5bF
— Jonathan Cohn (@Jonathan Cohn) 1539862915.0

Every Democrat running for House and Senate should be talking about this. The GOP has made it plain: if they win… https://t.co/6oc46MCVNq
— Ronald Klain (@Ronald Klain) 1539708902.0

Republicans have spent 8 years trying to repeal the ACA. When they say they haven't given up on it, you should tak… https://t.co/oXJJvlX5bF
— Jonathan Cohn (@Jonathan Cohn) 1539862915.0

So 3 weeks from Election Day and 😠 Mitch McConnell is blaming the national debt on Social Security and Obamacare 😠… https://t.co/QQiFdYoo4U
— Lenny Sundahl (@Lenny Sundahl) 1539859519.0

“He was a very smart guy, understood exactly what the problem was, understood divided government was the time to do it, but didn’t want to, because it was not part of his agenda,” McConnell said.

“I think it would be safe to say that the single biggest disappointment of my time in Congress has been our failure to address the entitlement issue, and it’s a shame, because now the Democrats are promising ‘Medicare for all,”’ he said. “I mean, my gosh, we can’t sustain the Medicare we have at the rate we’re going and that’s the height of irresponsibility.”

Repealing Obamacare was one of President Donald Trump's campaign promises. If Republicans hold on to Congress, he might get his wish. Millions of people would lose their health insurance. Elections have consequences. Vote.