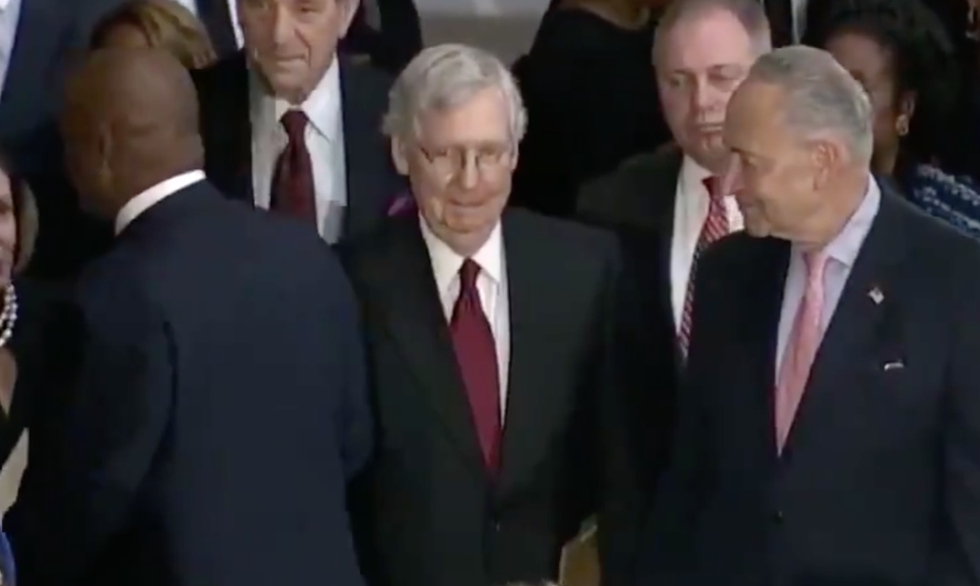 The death of Congressman Elijah Cummings (D-MD) sent a wave of sadness through lawmakers on both sides of the aisle, but longtime friend of Cummings, Bobby Rankin, brought a much-needed moment of levity when eagle-eyed viewers saw him snub Senate Majority Leader Mitch McConnell (R-KY) while shaking the hands of bipartisan lawmakers.

People weren't sure if it was an act of resistance or simply an oversight, but now Rankin is confirming to reporters that his denial was deliberate.

It has everything to do with Rankin's brother, whom McConnell denied veteran's benefits. Rankin's brother died of cancer last year after drinking contaminated water while serving in the Marines.

"When I saw Mitch McConnell, all I saw was my brother’s face," Rankin told The Washington Post.

“I could not put my hands in the man’s hand who refused to help somebody who served his country. I couldn’t do it, because I was thinking about my brother.”

@thehill Seems fair. #MoscowMitch is a terrible person and has wrought destruction on this country. No one should shake his hand.
— Rich Swinton (@Rich Swinton) 1572275825.0

@thehill McConnell should be thanking him for not spitting
— Semi Gruntled (@Semi Gruntled) 1572276065.0

McConnell has been almost completely rejected all semblance of partisanship and good faith since before Trump's election, when he proved to be a bulwark against any of the Obama administration's efforts—including the President's constitutional right to appoint a Supreme Court Justice. McConnell wouldn't even let the Senate vote on the appointment of Judge Merrick Garland, whom Obama chose to replace the late Justice Antonin Scalia a year before the 2016 election.

In Chicago, Trump mockingly thanks Obama for leaving him so many judicial openings. "How you allowed that is beyond… https://t.co/ykmqvwe5bB
— Sahil Kapur (@Sahil Kapur) 1572279697.0

Since then, McConnell has gone to pride himself as "the Grim Reaper" for his reliability in blocking numerous bills passed by the Democratic House of Representatives.

You can donate to McConnell's 2020 reelection opponent, Amy McGrath, here.