Mitch McConnell Is Complaining About How Democrats Have Handled the Kavanaugh Nomination Process, and People Can't Even 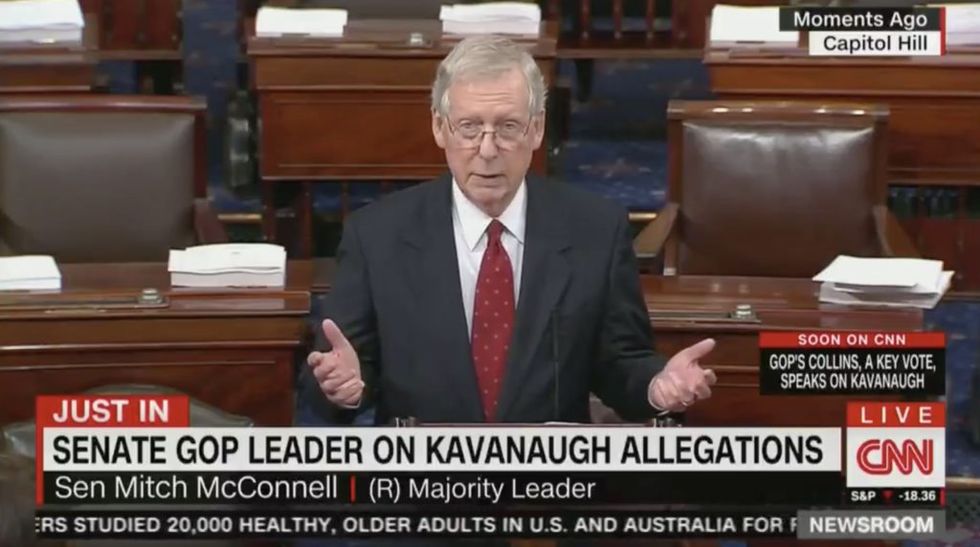 Senate Majority Leader Mitch McConnell took to the Senate floor to decry what he claims is a Democrat-led conspiracy to torpedo Brett Kavanaugh's Supreme Court nomination in the wake of sexual assault allegations.

"Now, [an] accusation of 36-year-old misconduct dating back to high school has been brought forward at the last minute in an irregular manner. It is an accusation which Judge Kavanaugh has completely and unequivocally denied," McConnell said, adding:

"This is what he [Kavanaugh] said: 'This is a completely false allegation. I've never done anything like what the accuser describes to her or to anyone.'

It is an accusation which the ranking member of the Committee for Jurisdiction [Dianne Feinstein] has known about for at least six weeks. Known about for six weeks––yet chose to keep secret until the 11th hour."

.@SenateMajLdr McConnell is on the Senate floor making a case that the Kavanaugh allegation is the result of a cons… https://t.co/1xeFParXYP
— Aaron Rupar (@Aaron Rupar) 1537213530.0

“They did not raise it in the thousand plus follow-up questions that senators sent to Judge Kavanaugh in writing. But now, at the 11th hour, with committee votes on schedule, after Democrats have spent weeks and weeks searching for any possible reason that the nomination should be delayed, now they choose to introduce this allegation.”

McConnell's claim that the way Democrats are handling the allegation is an "irregular" departure from the traditional process of confirming Supreme Court nominees opened him up to criticism immediately.

Liberal opponents have opposed the nomination, citing a precedent set by McConnell, who infamously refused to hold hearings for Merrick Garland, President Barack Obama’s nomination for the high court. At the time, McConnell claimed that the Senate should not confirm Supreme Court nominees during an election year, though he could cite no rules to support this assertion, and accusations that his decision was informed, at least in part, by racial animus toward Obama have dogged him ever since.

I will resume listening to process complaints from Mitch McConnell on the day Merrick Garland sits on the Supreme C… https://t.co/p78pNI3Mx2
— 🌟Nathan Murphy🌟 (@🌟Nathan Murphy🌟) 1537215519.0

In July, McConnell was similarly rebuked after he urged his fellow senators to see beyond the far-left fear mongering before evaluating President Donald Trump's eventual Supreme Court nominee "fairly."

Americans see beyond the far-left fear mongering. Senators should do the same. We should evaluate @POTUS’s nominee… https://t.co/6ItmgMwzHY
— Leader McConnell (@Leader McConnell) 1531171726.0

The facts were not lost on many who responded to McConnell’s message and charged him with hypocrisy, with some quoting the following tweet, in which McConnell said the American people should have a voice in choosing the next Supreme Court justice before the Senate could start confirmation hearings.

@SenateMajLdr @POTUS Giving Merrick Garland a hearing would have been a fair way to evaluate him, but you refused.
— jordan (@jordan) 1531171772.0

Complicating matters for McConnell: Several Republican lawmakers have gone on record saying that the Senate must postpone its vote on Kavanaugh until after Ford testifies.

Senator Jeff Flake (R-AZ), who sits on the Senate Judiciary Committee, said that Ford, who claims Kavanaugh attempted to rape her when they were teenagers, “must be heard” before the vote.

“I’ve made it clear that I’m not comfortable moving ahead with the vote on Thursday if we have not heard her side of the story or explored this further,” Flake told The Washington Post. “For me, we can’t vote until we hear more.”

Republicans wanted to push toward a Judiciary Committee vote on Thursday but Flake’s stance could endanger that. Should Flake block the committee from advancing Kavanaugh’s nomination, Republicans could attempt to bring Kavanaugh’s nomination directly to the Senate floor. But Republicans have 51 seats in the Senate and can only afford to lose two votes. Senator Bob Corker (R-TN), who is not on the Judiciary Committee, has said Ford should be heard before the panel votes, and his vote would be needed for a full Senate confirmation.

“I think that would be best for all involved, including the nominee,” Corker said of postponing the vote.

Well, I think that might be something they might have to consider, at least having that discussion,” said Murkowski, who is seen as among the likeliest to vote “no” on Kavanaugh’s confirmation. “This is not something that came up during the hearings. The hearings are now over, and if there is real substance to this, it demands a response. That may be something the committee needs to look into.”

Kavanaugh’s confirmation no longer seems certain, and he has entirely denied the allegations, which first emerged in a confidential letter passed to lawmakers by the FBI. The letter’s contents became public on Friday, but Ford’s identity remained anonymous until she came forward as the author.

Ford recalls Kavanaugh and one of his friends drunkenly forced her onto a bed and tried to remove her clothes. She protested, but only managed to escape after another friend entered the room and stopped Kavanaugh and the other man.

“I thought he might inadvertently kill me,” Ford, a California psychology professor, told The Washington Post. “He was trying to attack me and remove my clothing.”

The Post verified the account with notes from Ford’s past therapy sessions. They noted a “rape attempt” and an incident in which she was attacked by students “from an elitist boys’ school” who went on to become “highly respected and high-ranking members of society in Washington.”

Committee Chairman Chuck Grassley (R-IA) said he will set up separate phone calls with Kavanaugh and Ford before the vote.

65 high school acquaintances of Kavanaugh signed an open letter last week vouching for his character after the allegations first broke. However, more than two dozen of the women did not respond when contacted by POLITICO yesterday about whether they still stood by their defense of Kavanaugh. Two of the women who signed the letter “declined to comment,” the outlet noted.