Mitch McConnell Just Tried to Clapback at Jon Stewart Over the 9/11 Health Funding Bill, and Tone Deaf Doesn't Begin to Describe It 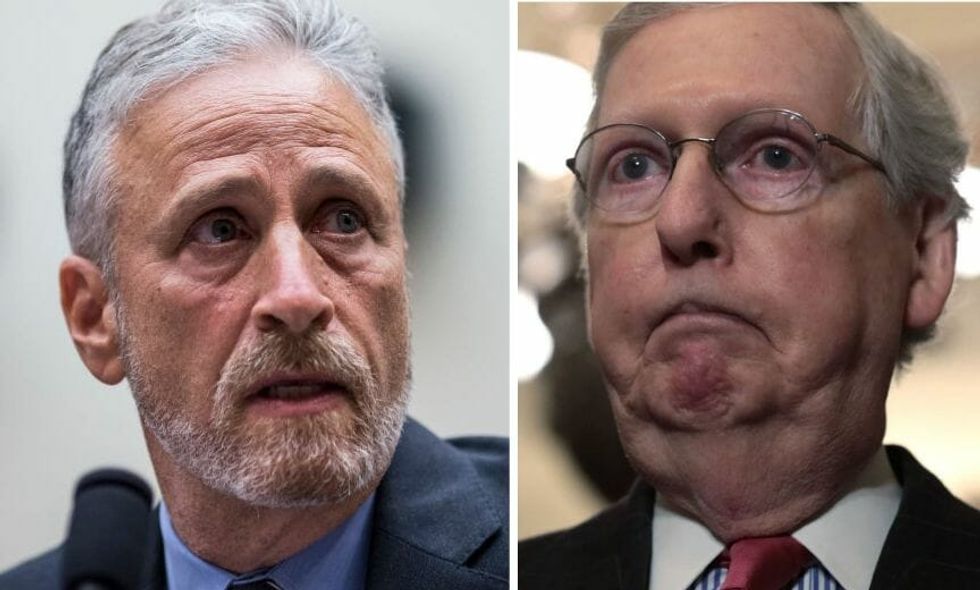 There was hardly a dry eye in the house last week when comedian Jon Stewart made an emotional plea to representatives on the House Judiciary Committee, urging them to extend the September 11 Victims Compensation fund and lambasting the lawmakers who didn't bother to show up.

The first responders attending the hearing gave the tearful Stewart a standing ovation and the video of his testimony quickly went viral.

In an appearance on Fox News Sunday, Stewart called out McConnell for his past hesitation in bringing the bill to the Senate floor.

“I want to make it clear that this has never been dealt with compassionately by Senator McConnell. He has always held out until the very last minute and only then, under intense lobbying and public shaming has he even deigned to move on it.”

In his own interview on Fox and Friends Monday morning, McConnell responded.

Mitch McConnell complains that Jon Stewart is "all bent out of shape" and "looking for some way to take offense" ab… https://t.co/OiafxbjdQ8
— Bobby Lewis (@Bobby Lewis) 1560776129.0

"We have never failed to address this issue," McConnell assured, "and we will address it again."

"I don't know why he's all bent out of shape, but we will take care of the 9/11 victims compensation fund."

"Members have a lot of things going on at the same time, and it sounds to me like he's looking for some way to take offense. There's no way we won't address this problem appropriately."

Americans everywhere were disgusted by McConnell's perceived lack of reverence for the victims Stewart was advocating for.

What's more, people weren't lacking for answers when McConnell asked why Stewart was "bent out of shape."

@mkraju Uh, because he actually cares about the health and well-being of the first responders. Empathy is a foreig… https://t.co/u5FvNXt2l9
— Leslie Warlick (@Leslie Warlick) 1560779060.0

@mkraju Uh, because he actually cares about the health and well-being of the first responders. Empathy is a foreig… https://t.co/u5FvNXt2l9
— Leslie Warlick (@Leslie Warlick) 1560779060.0

Many first responders and other survivors of the September 11 attacks still battle health issues nearly 17 years later which stem directly from that horrific day. The Victims Compensation Fund makes their healthcare possible, but payouts from the fund have been slashed by as much as 70 percent.