Why Mississippi Needs Even More Prisoners To Sustain Its Economy

Mississippi’s economy depends on a robust prison population, but prison reform and private prisons are emptying the coffers. 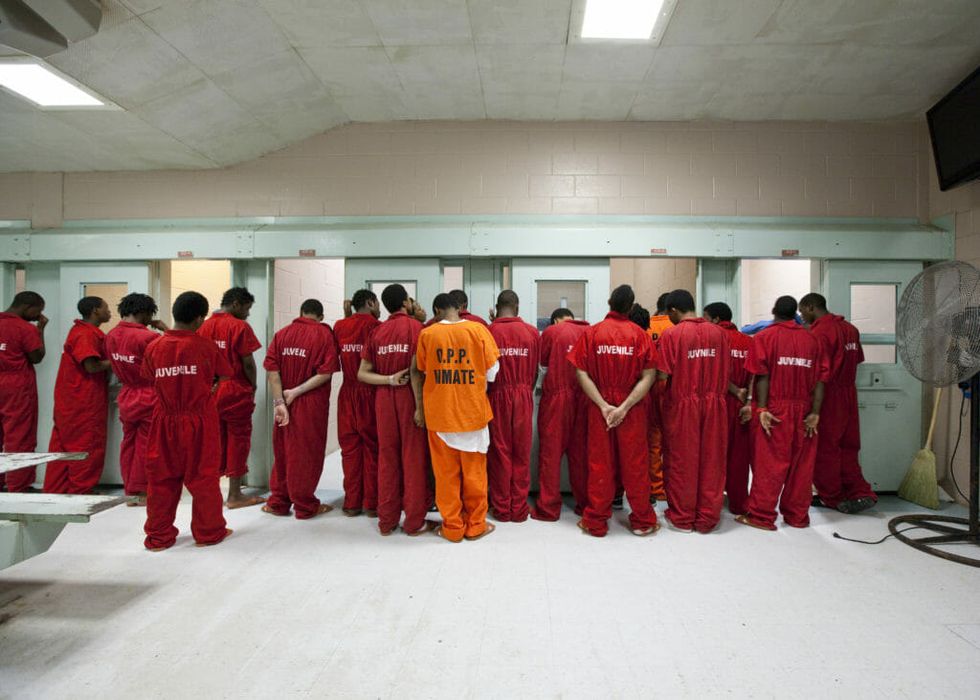 Basics: Orleans Parish Prison (O.P.P), New Orleans, Louisiana. This is the juvenile wing of the Orleans Parish Prison. The air conditioning is not working. There was a fight there the night before, so they have taken away privileges of TVs, cards, and dominos. It currently houses about 23 juvenile boys, two per cell. The cell at its narrowest portion measures about 6 feet wide. OPP is controlled by Sheriff Marlin Gusman. It is a minimal supervision facility.

The United States has the largest prison population in the world. More than 2.2 million Americans live behind bars — one out of every 100 citizens — and in many states, prisons have become a critical part of the economy. So critical, in fact, that some states find it hard to balance their budgets when the inmate population drops.

In 2014, faced with the country’s second-largest inmate population and overcrowded prisons, Mississippi enacted comprehensive, bipartisan prison reform legislation. With more than 17,000 of its citizens behind bars, the state was experiencing devastating consequences to its taxpayers, society and families and children. House Bill 585, also known as Right on Crime, has led to a 15 percent reduction in the state’s prison population, reduced recidivism rates and savings to taxpayers of $266 million over 10 years. States like Alabama are looking at the reform bill as a model for their own prison-related problems.

Meanwhile, changes to sentencing guidelines and reduced sentences for drug-related crimes have led to a drop in the prison population. Between 2002 and 2012, Mississippi increased average sentence length by 28 percent, with nearly half of the inmate population serving time for nonviolent offenses. Now, with drug sentencing guidelines changing across the country, and an emphasis on alternative sentencing for nonviolent offenders, fewer prisoners are coming into a system that had more than quadrupled in the past 30 years.

Regional and county prisons have lost about 20 percent of their inmates to state facilities, and three regional work centers have closed in the past year due to dropping numbers of

inmates and a correlating drop in funding, leading to budget shortfalls for their rural communities.

“Those citizens may want to question the wisdom of the officials in their respective counties who based budgets on inmate populations that cannot always be guaranteed,” said Marshall Fisher, commissioner of the Mississippi Department of Corrections (MDOC). “While I sympathize with the citizens of the affected counties, the Mississippi Department of Corrections cannot continue to pay counties above contract requirements when it has space to house the inmates. I have an agency to run. Public safety is paramount to MDOC’s mission, not subsidizing counties’ budgets.”

However, housing prisoners in county jails is actually the most economical option. The state pays $29.74 per prisoner to county jails and $43 to state prisons. About 25 percent of the state’s inmates are held at six privately owned for-profit prisons, to which the state pays from $60 to $90 per inmate. Why is Mississippi paying as much as three times as much money to private prison companies? The answer lies in an unfolding $800 million private prison profiteering scandal in which former prison commissioner Christopher Epps and others accepted bribes from the private prison industry. In exchange, arrangements were made that would direct prisoners to their facilities, despite the costs to taxpayers and to the regional jail system.

Several Mississippi officials, including Christopher B. Epps, former commissioner of the Department of Corrections and head of the prison system, have pleaded guilty to federal corruption charges in an unfolding private prison funding scandal. Mississippi’s private prisons, meanwhile, have been ranked among the worst in the nation, with abusive conditions that lead to inmates leaving prison more violent and disturbed than when they

went in. In 2012, federal judge Carlton Reeves said the privately-run Walnut Grove Youth Correctional Facility “allowed a cesspool of unconstitutional and inhuman acts and conditions to germinate, the sum of which places the offenders at substantial ongoing risk."

In 2015, more than 50 of the state’s religious leaders formed Clergy for Prison Reform (CPR), an organization devoted to improving the state’s prison system. The group says that the abusive prison system extracts profits from taxpayers while creating more damaged prisoners. These prisoners ultimately return to society without counseling, educational opportunities or job training, leading to a second wave of crime.

"We are preachers across racial, denominational and ideological lines who all share a common belief that private prisons haven't done what they promised to do," said the Rev. CJ Rhodes, CPR's president and pastor at Mt. Helm Baptist Church in Jackson. "The profit incentives have made rehabilitation and restoration of our citizens a side issue as opposed to the main thing."

As long as mass incarceration remains a profitable venture for an array of private businesses, however, society will pay for a system that devalues the long-term benefits of rehabilitation for society in favor of short-term profits for business. An investigation by the Southern Poverty Law Center found that inmates at private prisons had higher rates of recidivism, due to a thriving prison culture of violence and sexual abuse. “They will re-enter their communities, many lacking an education, many lacking treatment for their disabilities, many severely scarred both physically and psychologically by their experience,” the report said, noting that the system designed to keep the public safe ultimately achieves the opposite.