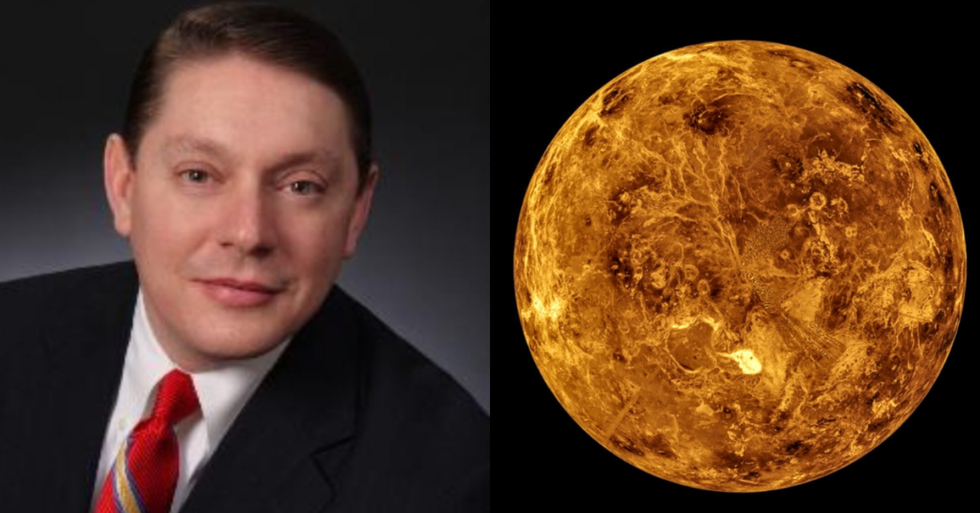 So what advanced degrees does Milloy hold to be able to comment on all things scientific? In addition to being a Fox News commentator, Milloy is a lawyer and lobbyist with close financial and organizational ties to tobacco and oil companies.

Beyond quoting himself, what type of proof did Milloy provide?

DeFazio on climate: "This is the existential threat to the future of the planet." Insanity. For comparison, the a… https://t.co/QcppP2UqjL
— Steve Milloy (@Steve Milloy) 1544838691.0

If you haven't seen Venus lately, it looks like this.

Venus is on the left, Earth on the right. They are not precisely a mirror image of each other.

So Wild Geerters—aka @classiclib3ral—decided to reshare Milloy's climate wisdom again because of things like this:

The guy is not joking. He's a Fox News commentator and the reason his @ is junkscience is because that's the name o… https://t.co/loLjRVSChq
— Wild Geerters (@Wild Geerters) 1566147907.0

Others quickly added their own equally sound science.

@classiclib3ral Now I feel super selfish for worrying about the survival of my species instead of the continued phy… https://t.co/8MG8bNCw0P
— Samuel J McKenna (@Samuel J McKenna) 1566147432.0

@classiclib3ral @gtconway3d And Mercury has no atmosphere and it's still around. That proves that all this malarkey… https://t.co/5Ab2bqfF8d
— Dave Bowman (@Dave Bowman) 1566188215.0

@DarthLux Back in the day we did fine on Venus. But the millennials and zoomer snowflakes are too soft for the sulfuric acid rain on Venus
— Wild Geerters (@Wild Geerters) 1566148354.0

While many suggested Milloy's science was what might be junk.

Again, knowing your sources is critical.

There seems to be a common thread of bullshit expertise with #rightwing commentators. Steve Milloy @JunkScience is… https://t.co/QyQo4hjdNt
— Nicholas Fossland (@Nicholas Fossland) 1565701868.0

As usual, Milloy has not responded to any of the criticism.

Think climate change is a real concern? This shirt is available here.