A Message From Twitter Appeared Right Above a Hate-Filled Trump Tweet in a User's Timeline, and People Can't Believe the Timing 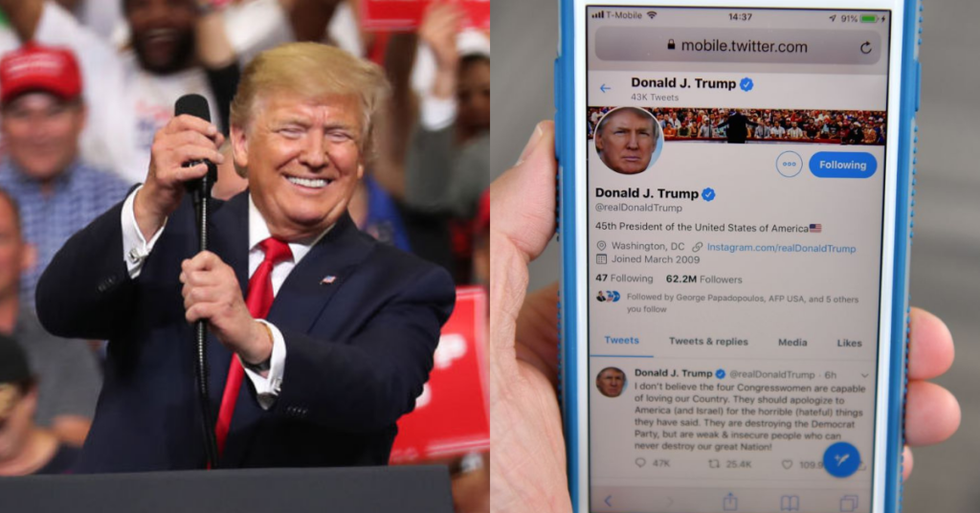 In real estate they say location is everything. In media it's timing.

So it was a moment of kismet for Miles Kahn executive producer of Full Frontal with Samantha Bee—of the "Ivanka Trump is a feckless c..." fame—to sign into Twitter at the moment he did.

There at the top of his feed was a tweet by a certain someone just under a notice from the Twitter Gods for everyone to play nice. Because they have rules.

"Did you know fewer than 1% of people on Twitter produce most of the Tweets that break our rules against abuse? Please take a look at our rules to know what is and isn't allowed."

And directly below that notice on Kahn's feed?

People thought maybe they found one of the 1%.

Although that presidential post was mild compared to his last several weeks.

This President has rendered so many words meaningless. As he continues to create a fantasy world in which he is the… https://t.co/JX5t37YRB1
— Miles Kahn (@Miles Kahn) 1564452426.0

As well as telling four Congresswomen of color that they came from horrible countries—they're all US citizens—and should go back where they came from which lead to chants of the same at a MAGA rally.

It’s not just racism, it’s presidential racism. This means that at this key point in U.S. history, we are seeing a… https://t.co/xiuueXsXzq
— Julian Zelizer (@Julian Zelizer) 1564313945.0

@julianzelizer @DeanObeidallah We tried to tell you. But they said there’d be grownups in the room 🤷🏽‍♀️
— Midwin Charles (@Midwin Charles) 1564317213.0

@julianzelizer The worrying thing is the more he reveals his true nature the more it seems to be reflected in US so… https://t.co/Ba2syYd2IL
— Gerard McLaughlin (@Gerard McLaughlin) 1564320458.0

While many got a good laugh from the timing on Kahn's Twitter feed, others saw it as an indictment of Twitter's practices.

@mileskahn @ParkerMolloy This is actually a perfect reflection of how ineffective @jack and @twitter are at impacting their own business.
— Bee Geesus (@Bee Geesus) 1564494036.0

In June, Twitter announced their stance on world leaders who violate the platform's terms of service. In the coming months, tweets from world leaders that violate the rules will be flagged with a warning and lose reach, but not be removed.

But they ask everyone else to support a culture of respect.