Trump's Secretary of State Just Accidentally Told the Truth About His Trip to Saudi Arabia, and People Are Calling Him Out

Well, at least he admits it. 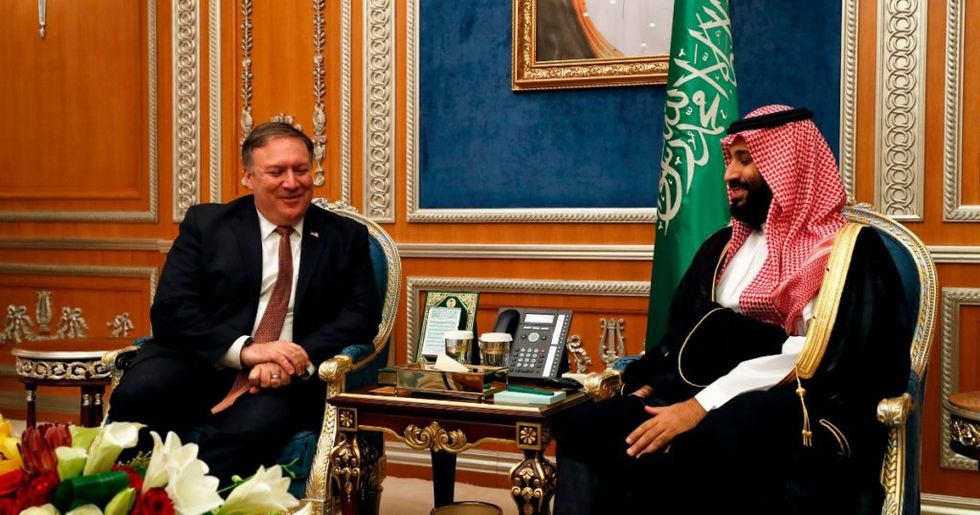 US Secretary of State Mike Pompeo (L) meets with Saudi Crown Prince Mohammed bin Salman in Riyadh, on October 16, 2018. - Pompeo held talks with Saudi King Salman seeking answers about the disappearance of journalist Jamal Khashoggi, amid US media reports the kingdom may be mulling an admission he died during a botched interrogation. (Photo by LEAH MILLIS/AFP/Getty Images)

As he prepared to fly to Turkey to discuss the Khashoggi matter with the Turkish president, Pompeo spoke with reporters and accidentally revealed the true intention of his meeting with the Saudis...or rather what it was not.

Pompeo said the Saudis assured him they would conduct a "complete, transparent investigation" into Khashoggi, and that the Saudis "made a commitment to hold anyone connected to any wrongdoing" accountable, including members of the royal family or any "senior officer or official."

When asked if the Saudis knew if Khashoggi is alive or dead, however, Pompeo said:

"I don't want to talk about any of the facts. They didn't want to either."

Pompeo went on to say that the visit was "incredibly successful in that sense" and that he looks forward to seeing the Saudis' report.

"We received commitments that they would complete this," Pompeo added, "and we're counting on them to do that."

Many journalists were appalled at Pompeo's response because the trip was sold to the public as a fact-finding mission - which clearly was not the case.

"The mission of Pompeo's trip was to find facts," tweeted Philip Rucker of WaPo.

MSNBC's Chris Hayes said the "entire charade is beyond disgusting."

Walter Schaub, former director of the Office of Government Ethics, took it one step further by suggesting Pompeo is part of a cover-up.

The public simply isn't buying Pompeo's story. Many feel that President Donald Trump and his administration are willfully obfuscating the truth.

@CarducciJoanne @chrislhayes Well, look, Jo, there are facts, and then there are alternative facts. Who's really to… https://t.co/TwQeBxYAFB
— Andrew (@Andrew) 1539782160.0

@chrislhayes So our Secretary of State doesn’t want to talk about the facts of an international scandal? WTF
— Deborah Coyote (@Deborah Coyote) 1539782538.0

Khashoggi is believed to have been tortured and killed at the Saudi Consulate in Istanbul, Turkey earlier this month by 15 Saudi nationals wielding a bone saw.

Evidence the Saudis were involved is mounting, but for the Trump administration, it's business as usual, as the Saudi royals fiercely deny any involvement.

"We are strong and old allies so we face our challenges together," bin Salman (MBS) told Pompeo as he arrived in Riyadh.

State Department spokesperson Heather Nauert described Pompeo's talks with MBS as "direct and candid" and that Pompeo thanked MBS for "his commitment to supporting a thorough, transparent and timely investigation of Jamal Khashoggi’s disappearance."

"Learning what happened to Jamal Khashoggi is the primary purpose of this trip and is of great interest to the president," Nauert said. "The secretary has made that clear in each of his meetings today."

Trump has suggested without evidence that “rogue killers” could be responsible for Khashoggi’s death despite audio and video recordings of the murder claimed to be in possession of Turkish officials and an evolving cover story being pushed by the Saudis.

The Saudi government is reportedly preparing to announce that Khashoggi, who was interrogated, tortured and murdered in the Saudi Consulate in Istanbul October 2, was killed by accident during a botched interrogation.

“Two sources close to the kingdom confirmed to CBS News later on Monday that the Saudi government was planning to admit he was killed, but call it an accident,” Tucker Reals reported on Tuesday.

It won’t be so easy, however, to write off the 15 Saudi operatives lying in wait inside the Saudi Consulate for Khashoggi’s arrival with a bone saw in hand as an accident.

But not everyone close to the administration is willing to take the Saudis at their word. Senator Lindsey Graham (R-SC) on Tuesday said MBS was a "wrecking ball" who likely ordered the assassination of Khashoggi.

"He had this guy murdered in a consulate in Turkey, and to expect me to ignore it, I feel used and abused," Graham said on Fox & Friends.

The Turkish government is conducting its own investigation as well.

In a statement on Monday, Khashoggi's family called for an "independent and impartial commission to inquire into the circumstances of his death.”

"We are sadly and anxiously following the conflicting news regarding the fate of our father after losing contact with him two weeks ago, when he disappeared after entering the Saudi consulate in Istanbul," the statement said. "Our family is traumatized, and yearns to be together during this painful time."