Mike Pence Just Called For The Creation of a Space Force by 2020 With a Straight Face, and Trump Is Cheering Him On 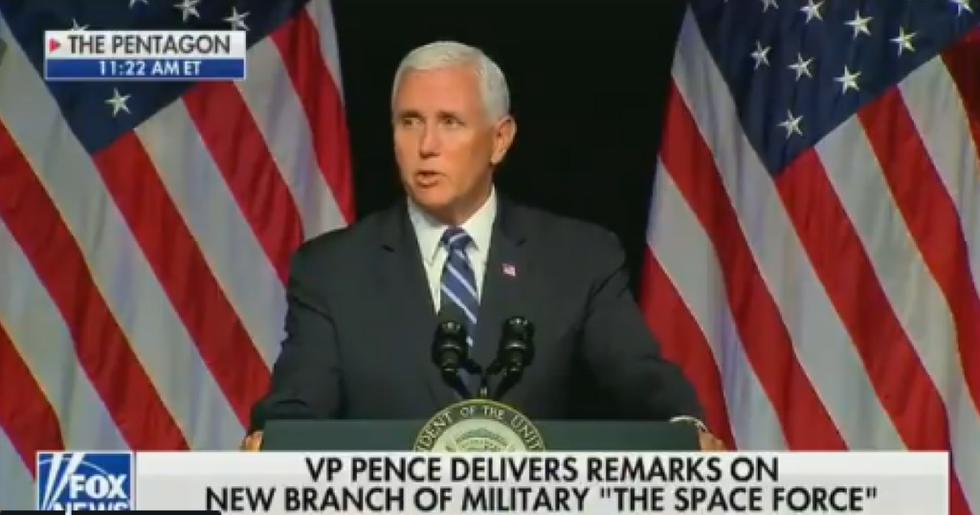 Vice President Mike Pence on Thursday outlined plans for a Space Force, a new "separate but equal" branch of the military that President Donald Trump wants to establish and implement by 2020.

Giving a speech at the Pentagon, Pence said a Space Force is necessary to defend the United States against the growing military and space capabilities of adversaries like China and Russia.

Pence added that the weaponization of space is "the next and the natural evolution of American supremacy."

"America will always seek peace, in space as on earth," Pence added. "But history proves that peace only comes through strength. And in the realm of outer space, the United States Space Force will be that strength."

Trump responded to Pence's speech on Twitter: "Space Force all the way!"

How are we going to pay for this, exactly?

The $8 billion proposal would require Congressional approval and would take away responsibilities from the Air Force, which currently monitors our skies.

If Trump can't get a wall on the U.S.-Mexican border, why not wall off the planet?

The administration, some critics have pointed out, prioritizes war over science.

The thought of weapons in space, aimed at our planet, is a truly terrifying for some people, who suggest we should invest more money in NASA instead.

The White House plans to create a U.S. Space Command by the end of 2018, which will be "led by a four-star general and be tasked with defending space, the way the Pentagon’s Pacific Command oversees the ocean," the Washington Post reported on Thursday.

There appears to be some budding bipartisan support for the Space Force in Congress. Representatives Mike Rogers (R-AL) and Jim Cooper (D-TN), who serve the House Armed Services Committee, responded to Pence's speech with enthusiasm.

A Space Force "will result in a safer, stronger America," Rogers and Cooper said in a joint statement. "We have been warning for years of the need to protect our space assets and to develop more capable space systems."

Defense and military leaders have expressed strong opposition to adding a sixth branch to the United States Armed Forces.

Defense Secretary Jim Mattis told Senator John McCain (R-AZ) that he opposed "the creation of a new military service and additional organizational layers at a time when we are focused on reducing overhead and integrating joint warfighting functions."

Mattis later added that despite his personal skepticism, military leaders are "in complete alignment with the president’s concern about protecting our assets in space to contribute to our security to our economy and we’re going to have to address it as other countries show a capability to attack those assets."