Mike Pence Just Launched 'Latinos for Trump' in Florida, and It's as Cringey as It Sounds 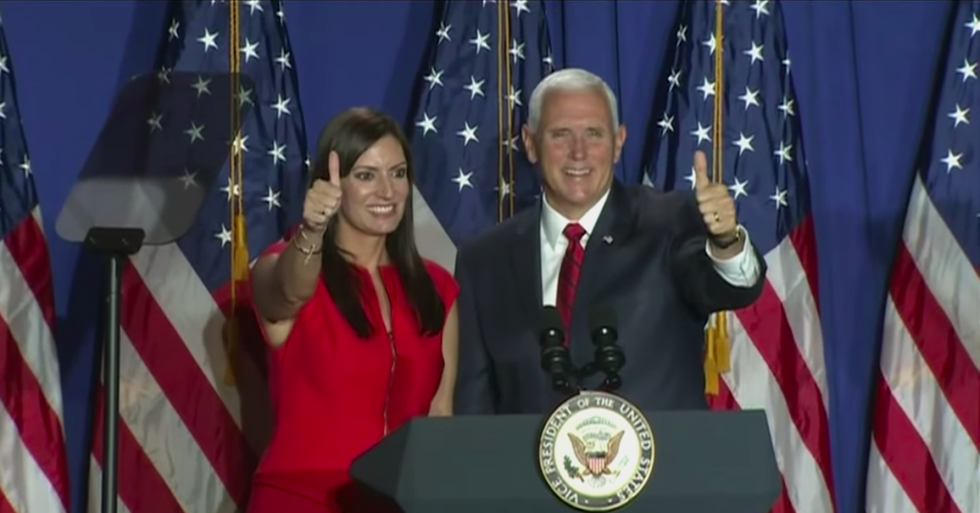 Hopping onto stage to the strains of the Free song "All Right Now"—the rock music choice and song lyrics making everything a bit more awkward—Vice President Mike Pence launched the Latinos for Trump coalition campaign initiative in Miami, Florida.

Pence came to the podium to exclaim:

"It is great to be back in the Sunshine State for the 2019 kick-off of Latinos for Trump!"

You can watch his opening remarks here.

Trump campaign officials indicated before the Orlando MAGA rally that launched the 2020 Trump/Pence campaign that Florida would be testing ground for their Latinx voter outreach. It's a better place than other states with high Latinx voting bases.

Many found the "hola" to be pandering.

Reactions online to the Latinos for Trump launch were less than favorable.

Some did not believe the authenticity of widespread support for Pence or Trump among Latinx voters.

@thehill @VP The absence of any crowd shot is most telling. No way of assessing how big—or how Latino—the crowd was… https://t.co/wvCaosHYh9
— Brien Kinkel (@Brien Kinkel) 1561487752.0

Some responded in a language Pence could understand. Maybe.

"Don't with your hello."

"Nothing says Latino Voter like Mike Pence, what a darn joke"

Considering the record of the Trump administration for most people of color, women, LGBTQ people, religions other than Christian...many found the idea of Latinos for Trump absurd.

@thehill @VP Any Latino who supports Trump should have their head examined
— Margie Glazer (@Margie Glazer) 1561485241.0

Watch the full launch of Latinos for Trump with Vice President Mike Pence here. Or at least catch that rock and roll entrance.

If the soundtrack had your feet tapping, you can get 5 classic Free albums here. It includes their hit "All Right Now."