People Can't Stop Sharing Pictures of Mike Pence Appearing to Sleep During Trump's Meeting With Pelosi and Schumer, and the Memes Are Pretty Savage 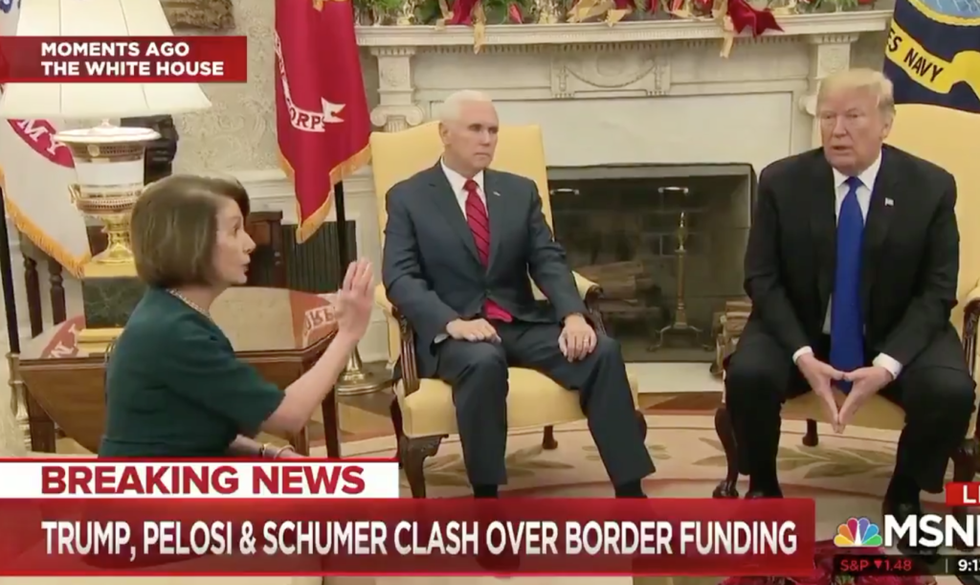 There's a famous moment in Jurassic Park where Dr. Alan Grant instructs on how to avoid the jaws of an oncoming Tyrannosaurus Rex: "Don't move! He can't see you if you don't move!"

Today, Vice President Mike Pence heeded that advice in a similar attempt to avoid a dinosaur with tiny hands.

As often happens in Trump world, what was supposed to be a simple photo-op devolved into an impromptu debate over funding for Trump's long-promised border wall. The scene culminated in the President proclaiming to stunned Democratic leadership that he'd be "proud" to shut down the government in the name of border security (which he insisted could not be achieved without a wall).

Watch part of the heated exchange below.

While the two Democratic leaders' and the President's verbal jousts were animated enough to instantly earn national attention, Pence is going viral for exactly the opposite reason: He was still as a statue, often shut his eyes, only moving to shift in his chair.

Many thought he could've been sleeping, or even dead.

How Mike Pence could fall asleep during the heated meeting with Trump, Pelosi and Schumer is beyond me. 😴 No stamin… https://t.co/uHQ0MEbPYy
— Jon Cooper 🇺🇸 (@Jon Cooper 🇺🇸) 1544553835.0

But never fear, many theories are developing as to just what was going on in Pence's mind.

Some say he was focusing on being chaste, while others insist it was ambition or fear.

Vice President Pence was not sleeping. His eyes were closed to avoid possible eye contact with a female outside the presence of Mother.
— Dianne Nora (@Dianne Nora) 1544557891.0

What #Pence was seeing while he closed his eyes during #Pelosi schooling over #TrumpShutdown https://t.co/6xqKsopE11
— Kevin Tripp (@Kevin Tripp) 1544552892.0

While Pence's posture and closed eyes may have confused some, there was at least one victor in the room: Speaker Pelosi.

Throughout Trump's interruptions and taunts, Pelosi remained engaged, calm and tenacious. She even said to the President at one point:

"Please don't characterize the strength I bring to this meeting."

The Speaker appears to have quelled some doubts of the more progressive House Democrats as to whether or not she would commit to standing up to Trump.

Hopefully, Mike Pence will wake up before 2019. It's clear Trump is going to need a formidable ally if he's going to take on the Democratic House in 2020.