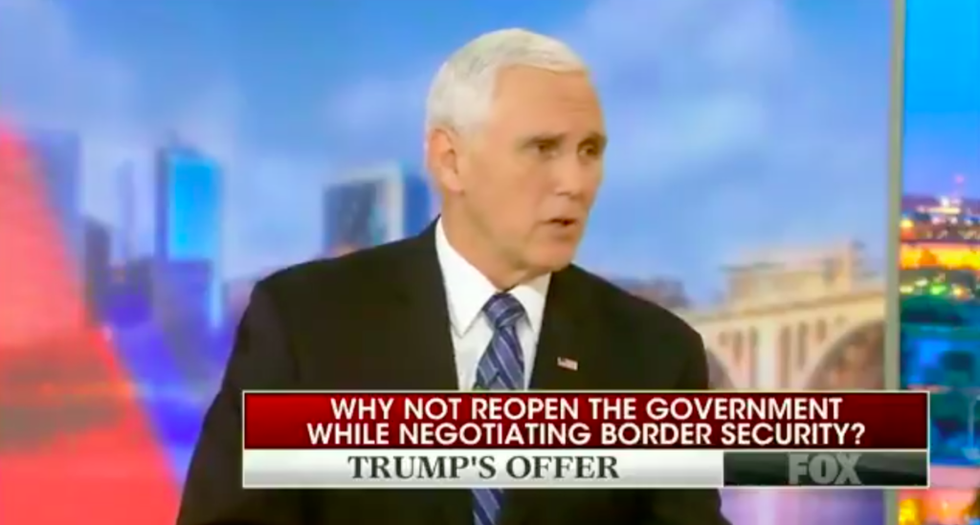 As the longest shutdown in American history rages on, the pressure is building on White House officials to endorse one of the bills passed by House Democrats to get it reopened.

Even Fox News is becoming incredulous at the Trump administration's insistence that $5 billion be allocated for a wall at the southern border that many believe would be ineffective and that the majority of Americans don't want.

Fox's Chris Wallace grilled Vice President Mike Pence as to why the White House refuses to prioritize reopening the government even with the assurance that negotiations on so-called border security would continue once the United States is functioning again.

After Pence mentioned that 800,000 workers want leadership to "find a way" to reopen the government, Wallace reminded him that

Pence was clearly taken off guard. After stammering for a few moments, the Vice President reverted back to the tired talking point that Americans want border security and Donald Trump would be the man to give it to them.

They chastised Pence for lying as well.

@mattshuham First, thank you to Chris Wallace for pressing the @VP. @SpeakerPelosi would not block the vote; she is… https://t.co/C8aEAynCrV
— Brett DiFrischia (@Brett DiFrischia) 1548080469.0

@mattshuham Thank you Chris Wallace for being 1 trying to hold the administration accountable. Unfortunately that i… https://t.co/tZwEbHiQEI
— deelane (@deelane) 1548079603.0

@mattshuham Thank you Chris Wallace for being 1 trying to hold the administration accountable. Unfortunately that i… https://t.co/tZwEbHiQEI
— deelane (@deelane) 1548079603.0