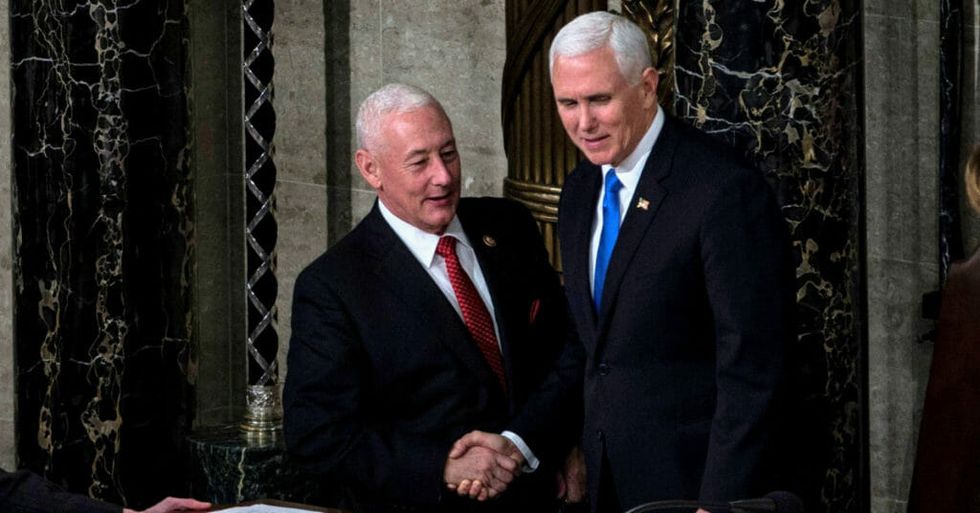 The impeachment inquiry into President Donald Trump is being conducted through hearings by three committees of the House of Representatives:

For some hearings, only committee members—appointed by their party—may attend due to the nature of the information or people testifying. Which has not stopped some Republicans from trying to strong arm their way in.

He is also Vice President Mike Pence's older brother. The seat he holds now for Indiana was once occupied by his younger brother for 12 years.

Pence was given his committee appointments by the GOP at the beginning of the 116th Congress. In addition to Foreign Affairs, he also sits on the House Transportation and Infrastructure Committee.

But it is his assignment to Foreign Affairs that provides Pence with a front-row seat to the impeachment hearings.

@BuzzFeedNews @DJHGOPexit So why did so many GOP representatives feel the need to storm the SCIF instead of just waiting for him to spill?
— CrunchyMama 🏳️‍🌈 (@CrunchyMama 🏳️‍🌈) 1571849994.0

Which makes many wonder, is there a conflict of interest perhaps?

@BuzzFeedNews Well we're screwed! I'm sure the older Pence is filling in all kinds of stuff to his brother and the dipshit president SMDH
— michele (@michele) 1571858586.0

And if there is, would Pence support the administration his brother is part of? Or would he favor impeachment and removal of the man who stands between his brother and the Oval Office?

Priess stated Pence's familial connection would be a larger issue in the Senate.

"The Senate is when there is actually a trial, whereas the impeachment process is more like a grand jury indictment when all of those issues that are being raised about fairness and due process… that comes in the trial [portion]. That’s not related to the initial investigation [for impeachment]."

The impeachment inquiry is ongoing. No date for a House vote has been set.

The book Piety & Power: Mike Pence and the Taking of the White House is available here.