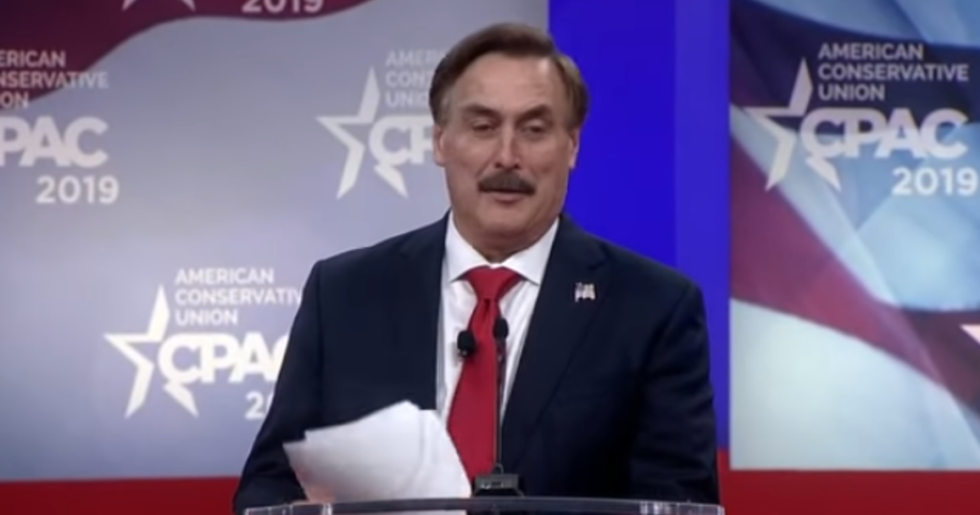 The annual Conservative Political Action Conference (CPAC) kicked off in Washington, DC Thursday and one of the early keynote speakers said that President Donald Trump was divinely appointed.

Mike Lindell, the founder of My Pillow, credited Jesus Christ with helping him overcome addiction.

“I woke up from years of addiction, and I was oblivious as to what was going on in our country,” Lindell said. “What I saw before me were friends unemployed, terrible political correctness, people saying happy holidays instead of Merry Christmas, and people trying to take God out of everything, and not even acknowledging Jesus Christ.”

Trump "invited me to meet him at Trump Tower in New York City,” Lindell said. “I walked into his office with high hopes on August 15th, 2016. I walked out of that office after meeting with him and I knew God had chosen him for such a time as this.”

Lindell continued, claiming that through Trump, "God answered our prayers, our millions of prayers and gave us grace, and a miracle happened on November 8th, 2016. We were given a second chance and time granted to get our country back on track with our conservative values and getting people saved in Jesus name.”

Parrotting Trump's talking points, Lindell gushed over what he believes is Trump's divinity.

“As I stand before you today, I see the greatest president in history,” Lindell said of Trump. “Of course he is. He was chosen by God. I see record low unemployment, from African-Americans to Hispanics at an all-time low. I see 5 million new jobs created since Donald Trump took office.”

@sahilkapur This is some sick stuff. It’s blasphemous, redolent of the kind of thing said in Nazi Germany by relig… https://t.co/OkxvazOaDg
— Quintus (@Quintus) 1551367210.0

@sahilkapur Do these evangelicals now believe God has another son and that Trump is the brother of Jesus? Is Trump… https://t.co/2M6vNrrfqT
— Renee Shatanoff (@Renee Shatanoff) 1551368450.0

"Cultish" is a good way of putting it.

The Founders never intended for presidents to be likened to God.

But here we are.

@sahilkapur George Washington fought a war so our government wouldn't be based on ideas like that.
— Donald Drumpf (@Donald Drumpf) 1551371459.0

Lindell's remarks are steering people away from buying his pillows, notorious for receiving lousy reviews.

@MattGertz My pillow is a terrible product and a testament to the gullibility of those who watch and believe what t… https://t.co/Cp5LuwAy2a
— James McLamb (@James McLamb) 1545528969.0

In fact, the Better Business Bureau revoked My Pillow's accreditation in 2017 "based on a pattern of complaints from consumers" and sketchy business practices.

“Among other issues, BBB has attempted to persuade MyPillow to discontinue their "buy one get one free” (BOGO)/other discount offers without success,” said Dana Badgerow, president and CEO of BBB of Minnesota and North Dakota.  “Continuous BOGO offers, which can then be construed as an item's regular, everyday price, violate not only BBB’s Code of Advertising - which all BBB Accredited Businesses agree to abide by - but also other state and national organizations’ rules.”