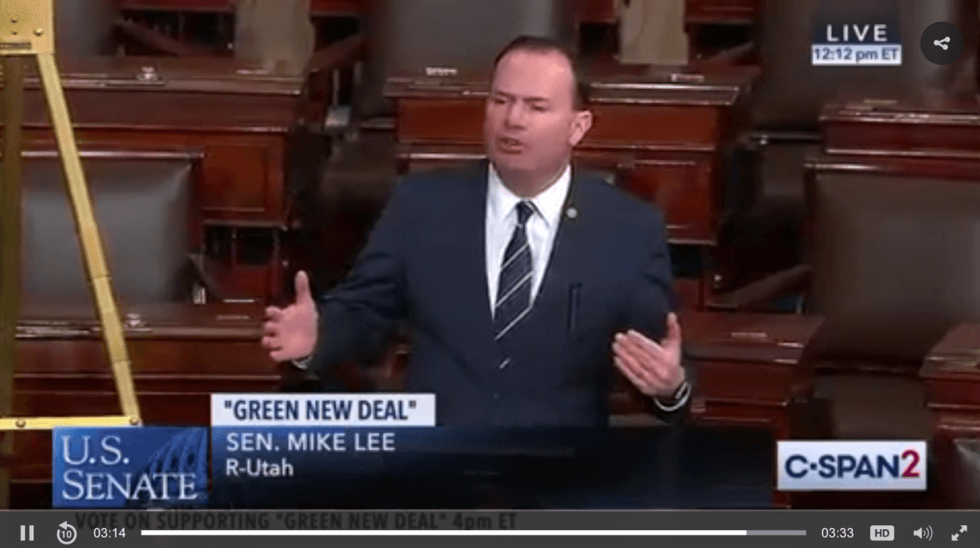 Do you know what Ronald Regan on a Velociraptor, Luke Skywalker on a Tauntaun, and Aquaman have to do with the Green New Deal?

Sen. Mike Lee (R-UT) doesn't, either, but he gives it a shot in a bizarre 14 minute speech on the senate floor.

"I rise today to consider the Green New Deal, with the seriousness it deserves," said Lee, who then proceeded to unveil a series of cringe-worthy visual aids, including a graphic of Ronald Regan riding a velociraptor, holding a machine gun, in front of a tattered American flag. Pop culture is cool, kids!

Lee's point was that the Green New Deal is unrealistic and poorly thought out, so he was approaching it with "the seriousness it deserves." He tried to prove this by way of one prolonged dad joke. The result was hilarious, but probably not for the reasons Lee intended.

Others were just as flummoxed as Congresswoman Ocasio-Cortez.

@bubbaprog @loweringthebar Note no feathers, that's how you know it's a God-fearing, Biblical velociraptor and not… https://t.co/KVMuDoi7QI
— Doc Squawk (@Doc Squawk) 1553621154.0

Playing to a silent senate floor, Lee's attempts to lampoon the Green New Deal made him seem painfully out of touch and puerile. "In a future without air travel, how are we supposed to get around the vast expanses of, say, Alaska, during the winter? I'll tell you how. Tauntauns, Mr. President."

"Not only are Tauntauns carbon-neutral," Lee continued, "but according to a report a long time ago and issued far, far away, they may even be fully recyclable and usable for their warmth on a cold night."

“In conclusion, Reagan and a velociraptor. Babies also. I piss on your secular humanism. There will be flag cookies… https://t.co/LuobpiFPi0
— Abe Goldfarb (@Abe Goldfarb) 1553624544.0

The Green New Deal—despite being a non-binding resolution, not a bill that could turn into law—is one of the most controversial initiatives in both houses of Congress. While economists and environmental experts alike, the initiative has been almost unanimously lambasted by Republicans—usually with more credible-sounding critiques than those presented by Senator Lee.

It's certainly hard not to feel sorry for the guy—but not as hard as it is to take him seriously.