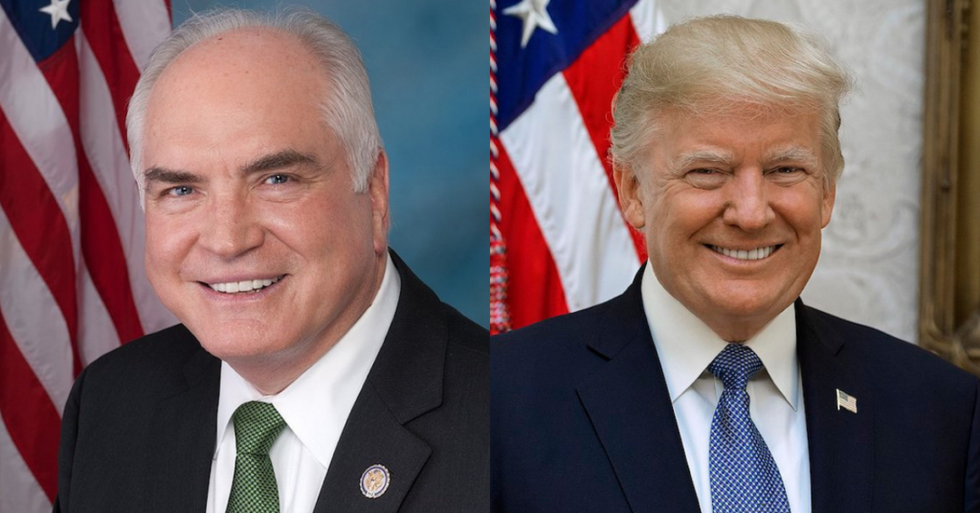 Vice News visited Capitol Hill in Washington DC to get Republican reaction to President Donald Trump's racist tweets aimed at four Congresswomen. Most members of the GOP remain mum on the subject and perhaps a few should have stayed that way.

Pennsylvania Republican Representative Mike Kelly made news again for all the wrong reasons. When asked to comment on the racist tweets, Kelly first claimed to be far too busy to pay attention to anything other than legislation.

After the Vice reporter filled him in, Kelly used the excuse long abandoned by most of the GOP: Trump isn't a politician, he's "like a guy [Kelly] grew up with, the President just says whatever he's thinking. When pressed to comment on the racism in those random thoughts shared with the world via Twitter, Kelly proclaimed it was not an issue because he, as a person of color, was not offended.

"You know, they talk about people of color. I'm a person of color."

When asked to clarify, Kelly added:

"I'm white. I'm an Anglo Saxon. People say things all the time, but I don't get offended."

Kelly, who earlier stated he had no knowledge of the controversy, claimed he had often been told to return to the country he came from.

"With a name like Mike Kelly you can’t be from any place else but Ireland."

You can hear the full interview here. Kelly's person of color remarks begin at the 2:30 mark.

In Pennsylvania's GOP though, Kelly's comments are not outside the norm as former Representative Rick Saccone tried to prove with his response to Trump's racist Twitter posts.

People were quick to go in on Kelly's "person of color" comment.

Although some in the GOP claimed the four Congresswomen were the racists since none of them were White and hadn't invited any White women to be their friend.

"Person of color" replaced terms associated with the segregation laws of the United States south. The exact definition evolved since then, but in the USA it refers to any person who is not white or of European descent.

Among Kelly's critics was the man who that same day announced his candidacy to challenge Kelly in November 2020, Daniel Smith, Jr. who tweeted:

I am officially announcing my candidacy for Congress against Mike Kelly! To fight for true representation for ALL… https://t.co/7AW65jvL6v
— Daniel Smith, Jr (@Daniel Smith, Jr) 1563273945.0

@danielforpa The first thing you should do is challenge @MikeKellyPA comment re: 'person of color' and what it mean… https://t.co/A11DRpLAls
— Steve Chiang (@Steve Chiang) 1563384277.0

This is not the first time Kelly claimed racism non-existent.

In a well publicized clash with Democratic Representative Maxine Waters on the House floor, the Pennsylvania Republican stated:

"We're trying to make America great every day and every way and the best way to do that is to stop talking about discrimination and start talking about the nation. We're coming together as a people in spite of what you say."

In a Fox News interview afterward, Kelly again disregarded all data on racial bias in lending practices, stating examining inequality is what divides us, not the actual discrimination.

Kelly's 2018 reaction is reflected in New York Democratic Representative Alexandria Ocasio-Cortez's response to House Republicans voting to strike any reference to Trump's racist tweets from the Congressional Record. AOC remarked Republicans will do "anything and everything ... to protect their desire to advance bigoted narratives."

"I think the fact that Republicans were more offended at acknowledging racism than they are at the racism itself speaks volumes for who they're fighting for in America."

If you oppose racism or other forms of bigotry, you can let people know with this shirt, available here in a variety of sizes and colors for men and women.