Pot, have you met Kettle? 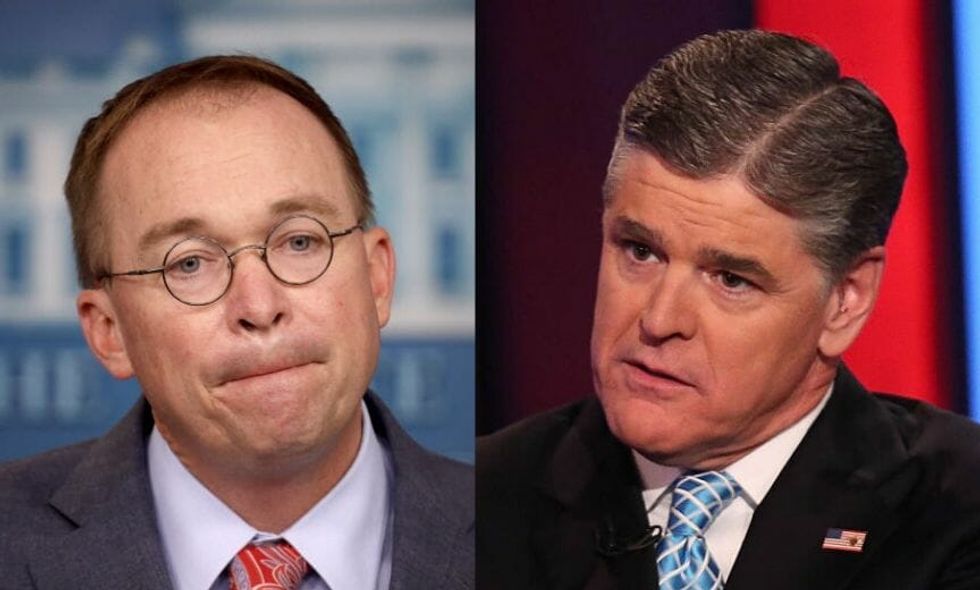 President Donald Trump's Chief of Staff Mick Mulvaney admitted that the Trump administration withheld congressionally allocated military aid from Ukraine on the condition that officials there investigate the conspiracy theory that a DNC server tucked away in Ukraine reveals that Democrats colluded with Ukrainians to frame Russia for hacking the 2016 election.

Mulvaney's admission struck a critical blow to the long-held Republican talking point that there was no "quid pro quo" offered by Trump to Ukrainian President Volodymyr Zelensky when Trump asked Zelensky to investigate his political rivals for personal gain.

There never had to be a quid pro quo for the call to be an impeachable offense, but now that Mulvaney admitted there was, Trump devotees like Fox News host Sean Hannity are scrambling to discredit him.

Speaking on his radio show, Hannity tried to shoot down Mulvaney's admission by dismissing the Chief of Staff's intelligence:

“What is Mulvaney even talking about? I just think he’s dumb, I really do. I don’t even think he knows what he’s talking about. That’s my take on it...This is why, I think, some of these people are so stupid. Read the transcript. We don’t need a non-whistleblower whistleblower. You don’t need a chief of staff’s idiotic interpretation of things when the president and the president of Ukraine and everybody else can read it all themselves. That’s what’s amazing.”

The transcript Hannity is referring to was only a rough transcript, the longer word-for-word transcript is on a top secret server and the White House refuses to reveal its contents.

Hannity lambasting Mulvaney for admitting a quid pro quo is especially comical, because Hannity heaped praise upon Mulvaney just before.

Mulvaney later said the media "misconstrued" what he'd said (they didn't) and that there was no quid pro quo, but people think Hannity—who's a close friend of Donald Trump—is helping an effort to oust Mulvaney from his job on Pennsylvania Avenue.

But if Mulvaney is dumb, that could be considered a reflection on Trump, who routinely assured during the campaign that he'd hire "only the best people."

It's unclear now whether Hannity will walk back his comments calling Mulvaney dumb, now that Mulvaney has walked back his walk back of there never being a quid pro quo.