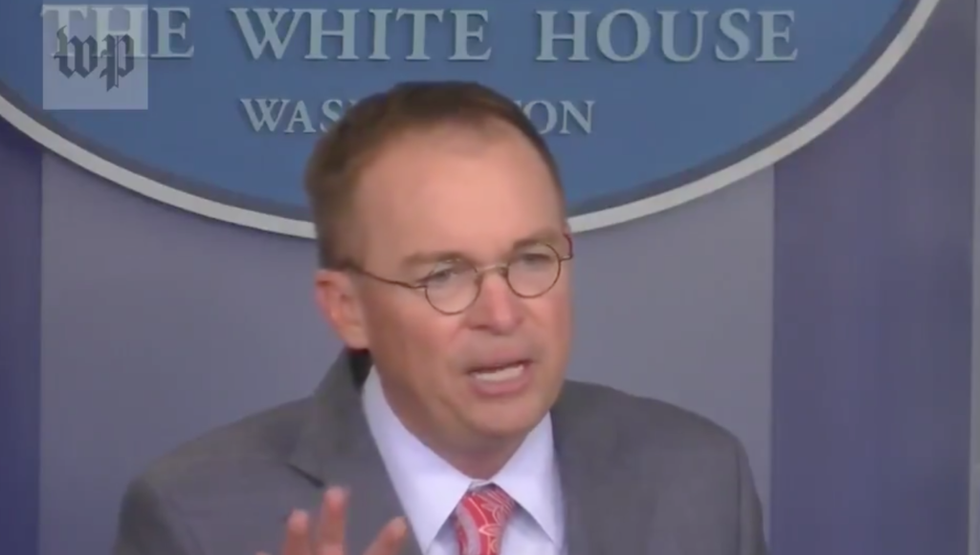 Since President Donald Trump's pressure on Ukrainian President Volodymyr Zelensky to investigate Trump's political rival—former Vice President Joe Biden—spurred an impeachment inquiry, Republicans have scrambled to defend the President's actions. Days before, Trump withheld pre-approved military aid to Ukraine, leading many to think Ukraine's receipt of the aid depended on its eagerness to do Trump's bidding.

Among the main GOP talking points was the claim that there was no "official quid pro quo"—or that Trump didn't specifically say, "I will give you this military aid, on the condition that..."

Democrats, meanwhile, argued that the President did say he'd like Ukraine to "do us a favor though," right before mentioning investigations into Biden, the nonexistent DNC server, and the Mueller Report.

A quid pro quo was never a prerequisite to an impeachable offense, but its existence now is no longer debatable. The President's Chief of Staff, Mick Mulvaney, just admitted it.

REPORTER: What you just described is a quid pro quo. It is funding will not flow unless the investigation into the… https://t.co/BfbxZrzwsX
— JM Rieger (@JM Rieger) 1571333639.0

Mulvaney admitted that the promised military aid to Ukraine had been withheld not on the condition of investigating Biden, but for information regarding the nonexistent Democratic National Committee server some claim is tucked away in Ukraine.

As Second Nexus covered more in-depth yesterday, this is based on a conspiracy theory that Ukraine and the Democratic National Committee worked together to make it look like Russia hacked DNC servers to help Donald Trump.

There is no physical server with damning information, digital replicas of the servers' contents were all turned over to the FBI, there is no documented connection between Ukraine and the company that rehabilitated DNC servers, and the Russians are definitely behind the hacking of our elections.

Nevertheless, Mulvaney insisted that withholding military aid on the condition of Ukraine investigating a conspiracy theory was A-OK:

"Get over it. There’s going to be political influence in foreign policy. That is going to happen. Elections have consequences."

CASE 1: 'If we lift the embargo on Cuba, it will hurt us with the Cuban immigrant vote in Florida. We shouldn’t do it.'

CASE 2: 'I want Ukraine to investigate Democrats. We should hold up military aid until they promise to do it.'

Mulvaney is right: presidents do #1 all the time. Domestic politics invariably affects foreign policy, sometimes crassly and sometimes not.

But #2? Presidents absolutely don’t do that all the time. This is not “domestic politics.” It’s using the official power of the US government to force a foreign country to smear a political opponent."

As former National Security Advisor Sam Vinograd and others confirmed, this quid pro quo is not normal in the least.

Mulvaney is lying. We do not (did not) extort foreign governments to do political bidding in exchange for security… https://t.co/gB8UYvlxmZ
— Sam Vinograd (@Sam Vinograd) 1571332346.0

Mulvaney is at the WH podium saying casually that the WH held up security money from Ukraine until Trump got assura… https://t.co/xomTuFQ8aU
— Abby D. Phillip (@Abby D. Phillip) 1571331811.0

Don't miss this part too: Mulvaney is now claiming that the "crowdstrike/Ukraine" conspiracy theory is part of an o… https://t.co/XnsfVY4AYP
— Abby D. Phillip (@Abby D. Phillip) 1571332570.0

Journos: don’t soft pedal was Mulvaney just said. They froze weapons aid to Ukraine until they agreed to get on boa… https://t.co/1XXw7OZANC
— Josh Marshall (@Josh Marshall) 1571332840.0

Mulvaney continued to assure that the quid pro quo wasn't unethical or impeachable, saying that the White House didn't even try to cover it up. When asked why the White House originally took the unconventional step of putting Trump's conversations with Zelensky and other world leaders onto a highly-classified separate server, Mulvaney said he wouldn't discuss classifications.

Mulvaney, translated: "We released a transcript to try to stop the story, because we somehow thought it would help… https://t.co/CgugSxg73k
— Chris Geidner (@Chris Geidner) 1571333122.0

Mulvaney saying there's no cover up because they released the incriminating evidence themselves. Seems to be resort… https://t.co/Qrdvp2zhyR
— Michael Ongstad (@Michael Ongstad) 1571332792.0

There's no longer a question of whether or not there was a quid pro quo. The question now is, will we allow the corruption to continue?