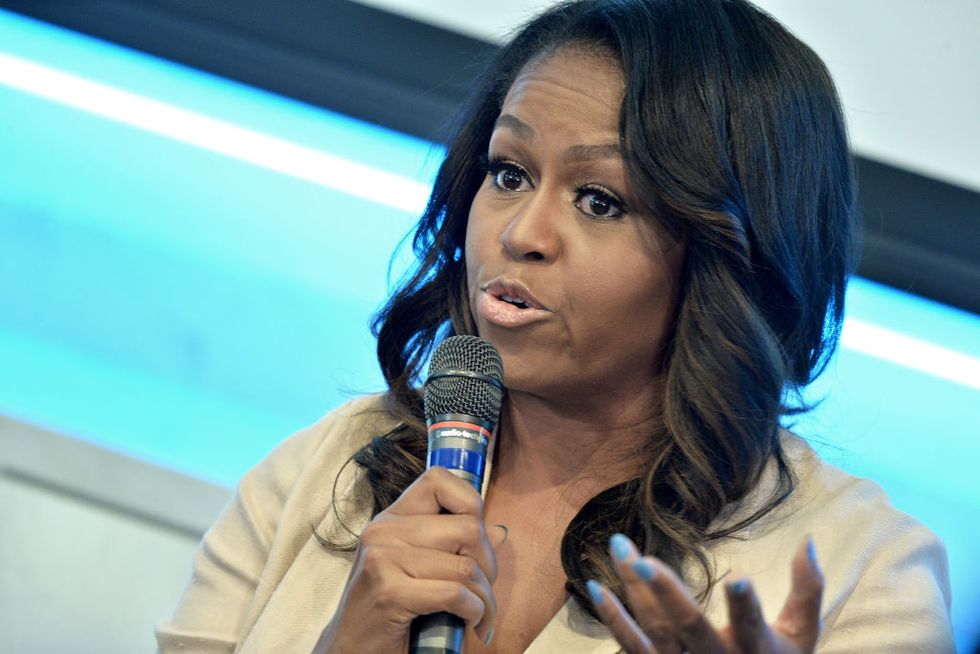 Earlier today, former First Lady Laura Bush excoriated the Trump administration for its child separation policy, calling it “cruel” and “immoral" in a widely circulated op-ed for The Washington Post.

“I live in a border state. I appreciate the need to enforce and protect our international boundaries, but this zero-tolerance policy is cruel. It is immoral. And it breaks my heart,” Bush wrote.

I live in a border state. I appreciate the need to enforce and protect our international boundaries, but this zero-… https://t.co/XG7d6AeBJh
— Laura Bush (@Laura Bush) 1529286437.0

The op-ed, one of the Post's top trending pieces today, attracted the attention of Bush's successor, former First Lady Michelle Obama, who captured the internet's attention with a single tweet.

Many praised Obama's response while slamming the inaction from Congress.

Obama's tweet offers a rather striking footnote to Bush's op-ed, which is the most impassioned call to action from a former First Lady yet.

Bush compared the separations to the internment of Japanese Americans in World War II, which resulted in the detainment of between 110,000 and 120,000 people of Japanese ancestry:

Our government should not be in the business of warehousing children in converted box stores or making plans to place them in tent cities in the desert outside of El Paso. These images are eerily reminiscent of the Japanese American internment camps of World War II, now considered to have been one of the most shameful episodes in U.S. history. We also know that this treatment inflicts trauma; interned Japanese have been two times as likely to suffer cardiovascular disease or die prematurely than those who were not interned.

She also observed that the moral character of the United States is at stake, saying “the injustice of zero tolerance is not the answer”:

People on all sides agree that our immigration system isn’t working, but the injustice of zero tolerance is not the answer. I moved away from Washington almost a decade ago, but I know there are good people at all levels of government who can do better to fix this.

Bush and Obama aren't the only former First Ladies to criticize the Trump administration's policies, particularly as President Donald Trump continues to falsely blame Democrats for the separations.

And, perhaps most strikingly, the president's own wife, First Lady Melania Trump, has issued a statement of her own, a rarity from a First Lady who has not often weighed in on her husband's policy proposals.

In a statement Sunday, the first lady's spokeswoman Stephanie Grisham said that "Mrs. Trump hates to see children separated from their families and hopes both sides of the aisle can finally come together to achieve successful immigration reform."

President Trump, meanwhile, has shown no signs of letting up his campaign blaming Democrats for the policy.

In a tweet earlier today, he implored Democrats to "start thinking about the people devastated by Crime coming from illegal immigration."

But the president's tweets are misleading and are indicative of a much larger trend of obfuscation from his administration.

The "zero tolerance" policy, which the president has admitted is a negotiating tool to get Democrats to cave to his demands (which include tougher border security as well as a wall erected along the nation's southern border), was, in fact, announced by Attorney General Jeff Sessions last month, and the Department of Homeland Security announced last week that around 2,000 children have been separated from their families during the six weeks since the policy went into effect.

In a tweet last night, Homeland Security Secretary Kirstjen Nielsen claimed that the administration “does not have a policy of separating families at the border.”

“It was a simple decision by the administration to have a zero tolerance policy for illegal entry,” he told The New York Times. “Period.”