Michelle Obama Lays It Down on Trump, And It's a Campaign Gamechanger 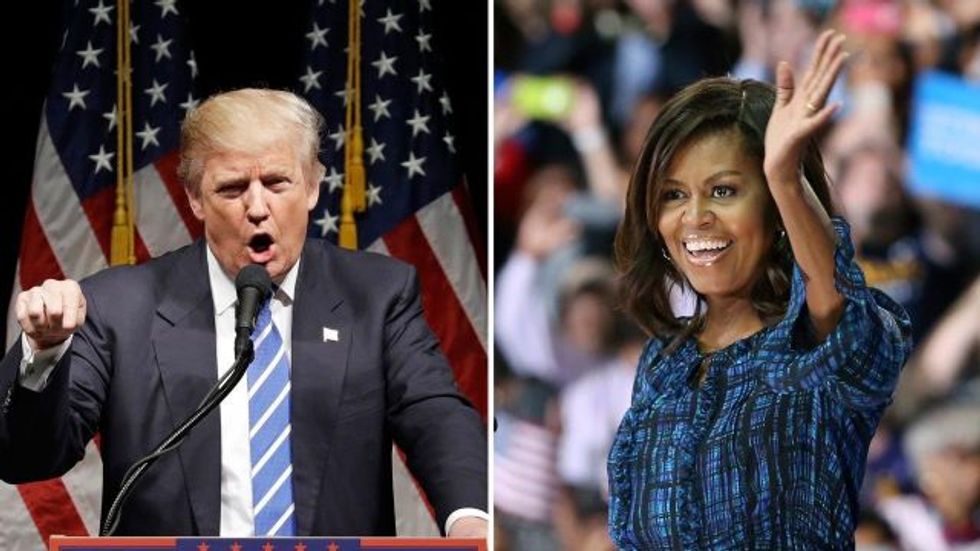 First Lady Michelle Obama weighed in on the long-running insinuations about her husband's birth while at a Hillary Clinton campaign rally at La Salle University in Philadelphia. Obama never mentioned Donald Trump by name in her comments, but the incendiary Republican nominee has been the most vocal perpetrator of Birther conspiracies and lies throughout Barack Obama's presidency. Mrs. Obama slammed Trump's comments were "Hurtful, deceitful questions deliberately designed to undermine his presidency, questions that cannot be blamed on others or swept under the rug by an insincere sentence uttered at a press conference."

The First Lady also warned voters that there would be no difference between a Trump candidacy and a Trump presidency. "If a candidate is erratic and threatening, if a candidate traffics in prejudice, fears and lies on the campaign trail, if a candidate thinks that not paying taxes makes you smart, or that it's good business when people lose their homes; if a candidate regularly and flippantly makes cruel and insulting comments about women, about how we look and how we act, well, sadly, that's who that candidate really is," she said.

She also addressed her concerns about Donald Trump's temperament. (Toward the end of Monday night's presidential debate, Trump claimed that he has “much better judgment” than Clinton while attacking her record while she was the country’s Secretary of State. “I think my strongest asset, maybe by far, is my temperament. I have a winning temperament,” he said at the time.) To that end, Mrs. Obama noted, “Experience matters, preparation matters, temperament matters. Hillary Clinton has it all. She’s the real deal.” And when "making life or death, war or peace decisions,” she said, “presidents can’t just pop off or lash out irrationally. No, we need an adult in the White House, I guarantee you.”

The First Lady is the most popular of Clinton's campaign surrogates. Polls pertaining to her appearances on the campaign trail are generally favorable, hovering around 60 percent. Her presence, the campaign hopes, should sway college students and millennials, and other voters who came out to support her husband in overwhelming numbers in 2008 and 2012. For her part, Mrs. Obama cautioned voters about the implications of too many protest votes or empty ballots on election day. “Here’s the truth: Either Hillary Clinton or her opponent will be elected president this year," she said. "And if you vote for someone other than Hillary or if you don’t vote at all, then you are helping to elect Hillary’s opponent.”

The Trump campaign released a statement saying that The First Lady is in "panic mode" because polls show Trump surging in popularity. Pennsylvania is a key battleground state, and the Philadelphia area is home to a sizable African American community. According to Census data, African Americans make up 44 percent of the general population. Trump's popularity with African Americans, polls indicate, is at zero. The First Lady is also particularly popular among young women (a recent Fox News channel poll revealed that 54 percent of American women view her favorably, while 13 percent view her somewhat favorably). Trump's history of negative comments toward women––the Clinton campaign has documented much of this in a series of television ads––and Mrs. Obama's harsh criticisms could inspire votes from both of these demographics.

Many observers of Monday's presidential debate also noted that Trump fumbled a predictable question about his role in the Birther movement. His response, which introduced a litany of names and sought to place blame falsely with the Clinton campaign, managed to both resurrect doubts about his temperament and speak about Obama as if he now were a fan of the president, potentially alienating the very base he built by spreading and sustaining the Birther lie.