How Michelle Obama Destroyed Trump Without Ever Mentioning Him 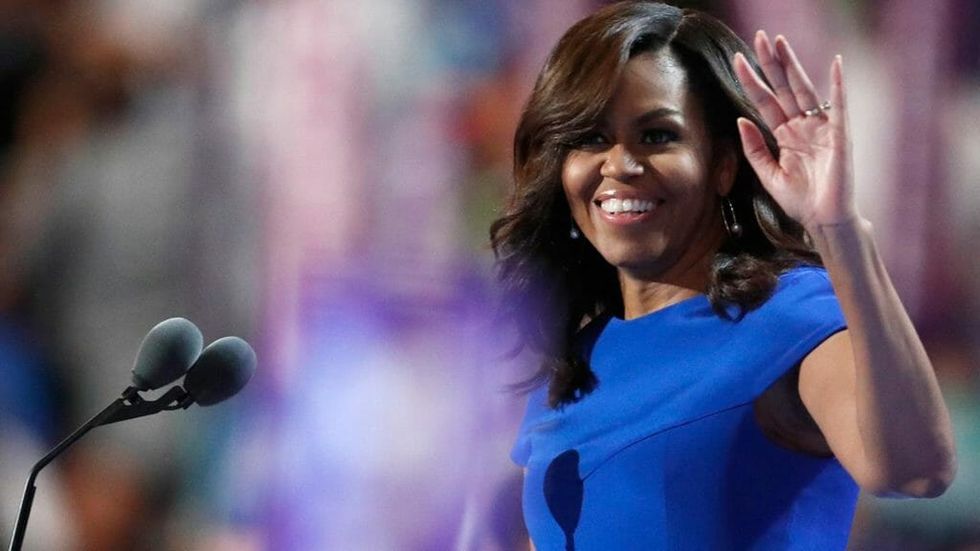 First Lady Michelle Obama earned a standing ovation after she publicly endorsed Hillary Clinton and took Donald Trump to task in her address at the Democratic National Convention last night. Obama never mentioned the business tycoon by name, but she emphasized the importance of not allowing a certain “bully” to become President.

“Barack [Obama] and I think about every day as we try to guide and protect our girls through the challenges of this unusual life in the spotlight,” she said. “How we urge them to ignore those who question their father's citizenship or faith. How we insist that the hateful language they hear from public figures on TV does not represent the true spirit of this country. How we explain that once someone is cruel or acts like a bully, you don't stoop to their level. No, our motto is, ‘when they go low, we go high.’ With every word we utter, with every action we take, we know our kids are watching us.”

Hillary Clinton, Obama continued, is not “angry or disillusioned" and is the far more measured and experienced candidate, one who does not speak of the presidential office in soundbites. "I want someone with the proven strength to persevere,” Obama said. “Someone who knows this job and takes it seriously. Someone who understands that the issues a president faces are not black and white and cannot be boiled down to 140 characters. Because when you have the nuclear codes at your fingertips and the military in your command, you can't make snap decisions. You can’t have a thin skin or tendency to lash out. You need to be steady and measured and well informed.”

Obama also applauded Clinton for her commitment to the "vision" of the country’s founders, before concluding her endorsement on a more poetic note. “I wake up every morning in a house built by slaves, and I watch my daughters, two beautiful and intelligent black women, playing with their dogs on the White House lawn,” Obama said. “And because of Hillary Clinton, my daughters, and all our sons and daughters, can take for granted that a woman can become president of the United States.”

Obama’s speech captivated the blogosphere. Writer Rebecca Traister praised her for her “ingenious and scathing elegance” and users around the country

took to their Twitter accounts to express their admiration.

No snark or irony: Michelle Obama was just awesome. Makes you proud of a country in which such a speech is possible.
— Paul Krugman (@Paul Krugman) 1469499727.0

President Obama’s response was the most widely circulated tweet of the night.

Incredible speech by an incredible woman. Couldn't be more proud & our country has been blessed to have her as FLOTUS. I love you, Michelle.
— President Obama (@President Obama) 1469499919.0

But it was actress Mia Farrow’s tweet that added some light humor to the proceedings, in a public jab to Melania Trump, who sparked controversy following allegations that she’d plagiarized sections of her headlining testimonial at the Republican National Convention last week from a speech Obama gave at the Democratic National Convention in 2008.

Transcripts from Trump’s address indicated a near word-for-word similarity. Melania Trump claimed that she wrote the speech herself, and that she worked with a speechwriter for six to eight weeks in preparation for the convention.