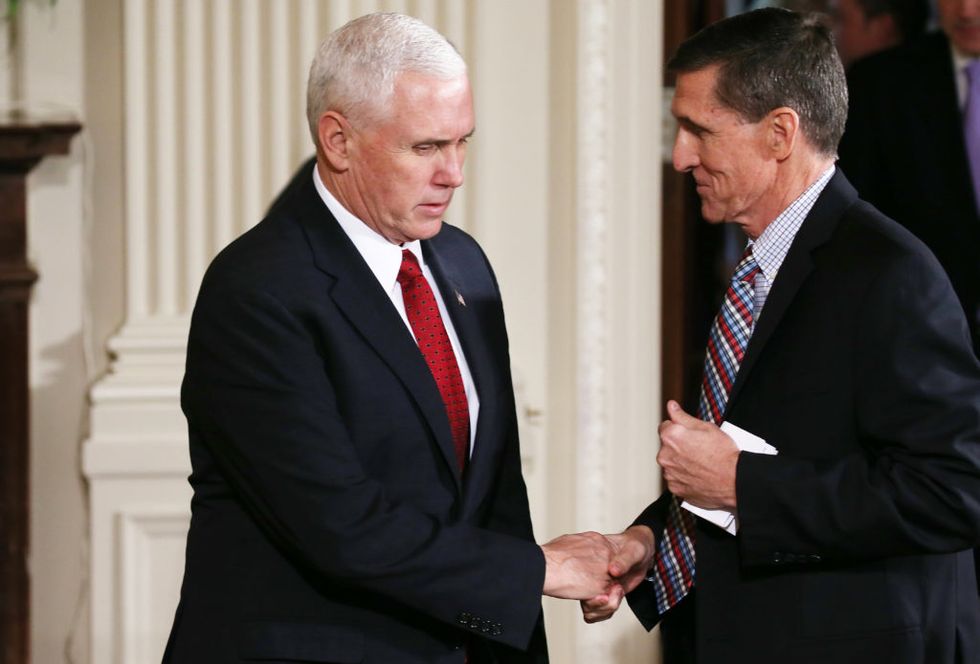 American Patriot @GenFlynn did not lie to Pence (or anyone else in the admin) about his perfectly legal and appropriate conversations w Russian AMB Kislyak in Dec 2016. Why would a highly decorated military intel officer lie about something legal? Been a MSM lie from day 1

Here’s another MSM lie There was never anything my father had 2 protect me from because I was never involved in or did anything illegal. Any1 who knows me, knows I operate w incredible integrity. This narrative that @GenFlynn had 2 “plea 2 protect his son” has been false from day 1.

President Donald Trump fired Flynn Sr. less than three weeks into his job for lying to Pence about the encounter with Kislyak. At least, that's the story the White House has been telling for the past year.

Flynn pled guilty to lying to the FBI about his communications with high-level Russians during the presidential transition period. Shortly after his plea, Flynn issued a statement saying he understands and accepted the consequences of his actions.

I recognize that the actions I acknowledged in court today were wrong, and, through my faith in God, I am working to set things right. My guilty plea and agreement to cooperate with the Special Counsel's Office reflects a decision I made in the best interests of my family and of our country. I accept full responsibility for my actions.

If true, Flynn Jr.'s statement blows a massive hole in Pence's account of what happened and calls into question the real reason Flynn was fired. "I was disappointed to learn that ... the facts that had been conveyed to me by Gen. Flynn were inaccurate," Pence said in December.

CNN's Chris Cillizza pointed out that Flynn Jr.'s account raises serious questions about the veracity of either his father's or the Vice President's statements.

"Flynn Jr. is now saying his father never lied to Pence about his interactions with Kisylak. Which, if he is telling the truth, would mean:

Perhaps most vexing is the possibility of both Trump and Pence potentially having lied to the FBI and the American public about Flynn. During a meeting with former FBI Director James Comey in February of last year, Trump asked Comey to let Flynn off the hook.

"I hope you can see your way clear to letting this go, to letting Flynn go. He is a good guy. I hope you can let this go," Trump said. Comey detailed in his memos that he agreed Flynn was a good guy but never indicated that he would drop the investigation.

And because our current political universe is riddled with tangential surprises almost daily, the notion that Pence could be implicated in Special Counsel Robert Mueller's investigation into possible obstruction of justice by the president isn't crazy. Furthermore, as leader of the presidential transition, Pence, it can be assumed, should have had a grasp as to what was going on with incoming senior White House staff.

Either he was lied to, or Pence is not being truthful. The implications of the latter are enormous. Granted, Flynn Jr. has a propensity for peddling conspiracy theories, like "Pizzagate," which alleged that Hillary Clinton was running a secret pedophile ring out of a New York pizza shop. Still, it's reasonable to wonder why Flynn would lie to the FBI while at the same time telling Pence the truth. This also raises the possibility of Flynn's plea itself being a lie.

But, if so, why? Who knew what, and when did they know it?