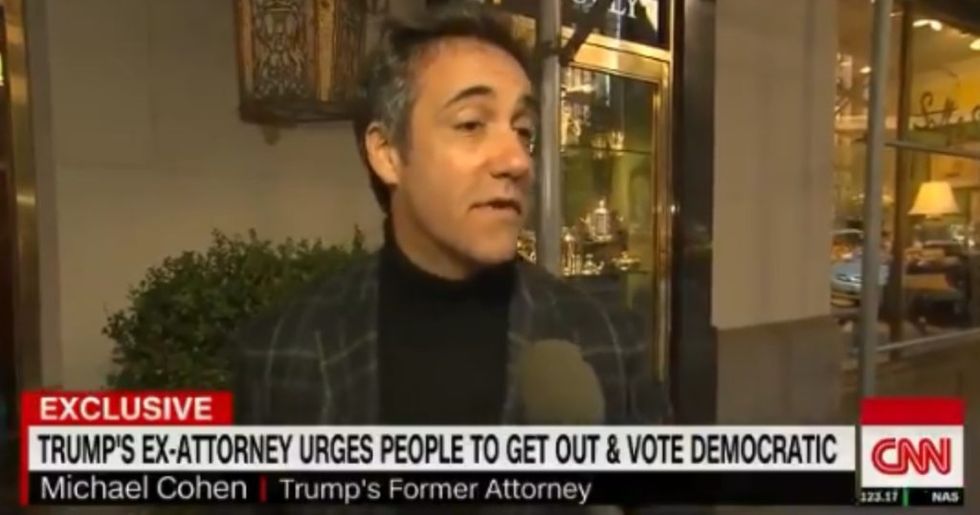 President Donald Trump's former lawyer and fixer Michael Cohen is urging Americans to vote against Trump and the Republican party, lest we face many more years of "craziness."

"Listen, here's my recommendation," Cohen told CNN on Friday. "Grab your family, grab your friends, grab your neighbors, and get to the polls, because if not, you are going to have another two or another six years of this craziness. So make sure you vote."

These comments follow Cohen's tweet last Sunday in which the embattled attorney called the upcoming midterms "the most important vote in our lifetime."

The #MidtermElections2018 might be the most important vote in our lifetime. #GetOutAndVote #VoteNovember6th
— Michael Cohen (@Michael Cohen) 1539534737.0

The Twitterverse loves that Cohen has abandoned his loyalty to Trump, for whom Cohen once said he would take a bullet.

Not so much anymore, it seems.

Others noticed that Cohen - despite his legal entanglements and looming prison sentence - is giving off an aura of calm.

Cohen also spoke about where his loyalties lie.

“To be crystal clear,” he told ABC's George Stephanopoulos in June, “my wife, my daughter, and my son, and this country have my first loyalty.”

Cohen has become a formidable voice of dissent against his long-time boss and client.

Earlier this week, Cohen announced that he had re-registered as a Democrat after having identified as Republican while serving as the Republican National Committee's deputy finance chair. Cohen resigned his post in June.

"I've been Democrat pretty much my whole entire life," Cohen admitted to CNN. "I switched because of the requests from the RNC. I couldn't be the vice chair of the RNC and be a Democrat."

In August, Cohen pleaded guilty to a litany of crimes he claims to have committed at the behest of Trump, including orchestrating hush money payments to women shortly before the 2016 election.

The charges ranged from fraud and making false statements to banks to campaign finance violations. Cohen is expected to be sentenced in December and faces up to 65 years in prison.

Cohen has also been cooperating with Special Counsel Robert Mueller's investigation into the Trump campaign's suspected ties to Russia and whether Trump obstructed justice by firing FBI Director James Comey.

Cohen has reportedly spent more than 50 hours talking to Mueller's team of investigators. A friend of Cohen told Vanity Fair's Emily Fox that Cohen is trying to right the wrongs he helped perpetuate.

"What you see now is a return to who he was before all of this,” the person said. “He’s an open book, and he’s adamant to make it right.”