Former Trump Aide Just Lost It On CNN After Being Called Out for Victim Blaming, and the Internet Can't Even 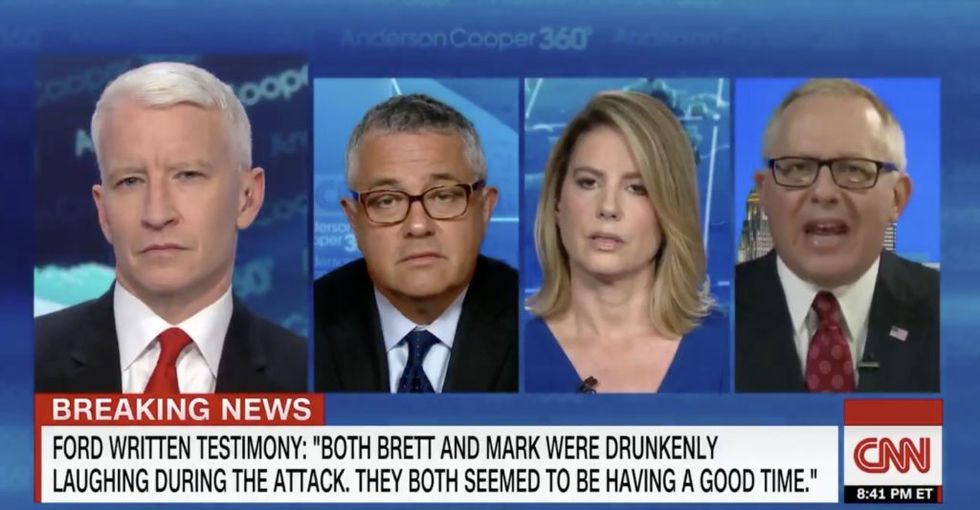 "I understand that something probably happened to Dr. [Christine Blasey] Ford," said Caputo, referring to the Stanford University professor who alleges Kavanaugh assaulted her at a party when they were both in high school and is set to testify this morning, "I just don't think Brett Kavanaugh was involved." He then proceeded to criticize Julie Swetnick, who alleges she was the victim of a gang rape where Kavanaugh was present, for attending parties where "girls are getting gang raped by teenagers when you're an adult."

It was after panelist Jeffrey Toobin accused Caputo of victim blaming that Powers weighed in.

"It's just this tactic of attacking a very young woman. I just don't understand the thinking behind it except for the fact that for a long time, certainly in the period that these accusations are about in the 1980s, I went to high school then: This was a time when women simply were not believed and everyone sounded like Donald Trump and Michael Caputo. If you're going to ask why women didn't come forward, that's your answer, Michael. Just listen to yourself."

Powers was clearly not finished, but that didn't stop Caputo from interrupting her numerous times in a bid to defend himself.

"You're going to call me out like that?" Caputo asked. "Let me tell you this––"

"Yeah, I listened to you ranting and raving for two segments, now you listen to me," Powers replied.

"You don't call me out like that on national television––"

"I know what it was like to be a woman during that time period, and you don't. This is exactly like––"

"Will you give me a chance?"

"They said that black people were making it up––"

“Enough… I don’t get invited on here to be called out by you like this," Caputo said, flustered. "This is inappropriate.”

Caputo was heavily criticized for the exchange, which many characterized as demeaning toward Powers––and women in general.

If the exchange between the two seemed synonymous with the exact treatment women have long complained men perpetuate in the public arena, with Caputo in the role of the battering ram so insistent on getting a word in edgewise that he was willing to steamroll a woman in the midst of sharing her experiences, then it was lost on him, because he continued.

"Here's the downside to this: From now on, every mother of sons, every grandmother of grandsons has to fear for the future of their boys because of people like you," he said to Powers, "who sit here and take uncorroborated testimony, uncorroborated allegations against a decent man and ruin him because it gets you ratings. Enough of that!"

To that, Powers only said: "That's bonkers."

It seems others are inclined to agree:

Michael Caputo on @CNN tonight is an arrogant misogynist. He has revealed who is to the rest of the world! Pay attention
— Richard Skipper (@Richard Skipper) 1538008846.0

Dr. Ford is set to testify at 10 a.m. this morning. In her opening statement, released ahead of her appearance, she lays her feelings bare:

"I am here today not because I want to be. I am terrified. I am here because I believe it is my civic duty to tell you what happened to me while Brett Kavanaugh and I were in high school...

My hope was that providing the information confidentially would be sufficient to allow the Senate to consider Mr. Kavanaugh's serious misconduct without having to make myself, my family, or anyone's family vulnerable to the personal attacks and invasions of privacy we have faced since my name became public. In a letter on August 31, 2018, Senator Feinstein wrote that she would not share the letter without my consent. I greatly appreciated this commitment. All sexual assault victims should be able to decide for themselves whether their private experience is made public."

"Sexual assault is horrific. It is morally wrong. It is illegal. It is contrary to my religious faith. And it contradicts the core promise of this Nation that all people are created equal and entitled to be treated with dignity and respect," he writes, in part. "Allegations of sexual assault must be taken seriously. Those who make allegations deserve to be heard. The subject of allegations also deserves to be heard. Due process is a foundation of the American rule of law."

"The allegation of misconduct is completely inconsistent with the rest of my life," he says elsewhere, in closing. "The record of my life, from my days in grade school through the present day, shows that I have always promoted the equality and dignity of women."