This Democratic Senator Just Savagely Called Mitch McConnell Out on His Hypocrisy, and We Are So Here For It 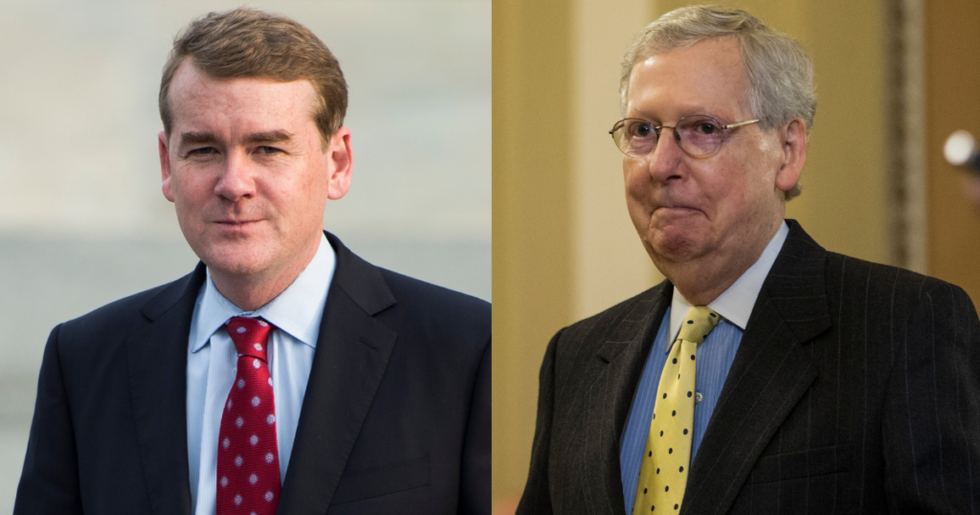 On Wednesday, McConnell accused Senate Democrats of trying to block Trump's will by adhering to the rule that requires 30 hours of floor debate per nominee. McConnell complained that the rules were unfairly punitive to Trump and his agenda.

McConnell then forced a vote to eliminate the 30-hour rule on two of Trump's non-controversial nominees. A majority of 51-48 voted to suspend the rules, which set precedent for future proceedings. This rare move is what is known as the "nuclear option."

“It is time for this sorry chapter to end,” McConnell said, minutes before the votes were cast. "This is the day we end this completely outrageous level of interference and obstruction with this administration."

Bennet on Friday tore into McConnell for his flagrant hypocrisy, notably for his past statements on the importance of protecting the rights of the minority.

McConnell invoked the "nuclear option to once again break the Senate rules," Bennet said in an address on the floor, marking the latest in a lineage of decisions that "degrade the Senate's responsibility to advise and consent."

Bennet reminded his colleagues that when Barack Obama was president, McConnell was "systematically denying [Obama] the right not only to put people in the Cabinet and in his administration but to put judges on the bench as well. It has been a concerted strategy of Senator McConnell for a decade and he has succeeded."

Recall that McConnell denied Obama the opportunity to nominate Merrick Garland to the Supreme Court following the untimely death of Justice Antonin Scalia in 2016. McConnell argued that the seat should remain vacant until after the presidential election, which was won by Donald Trump.

"There were 342 days left in his term! And I think when the history is written of this period in our political system, this is all gonna look like a tragic farce. All of it. And people are gonna know when they write an op-ed piece on April Fool's and say one thing when they've spent the last 20 years doing something else, that's not gonna be lost to the pages of history."

With the new policy in place, only two hours of debate are mandated per nominee, which means the Senate and fill empty positions at breakneck speed. Not only has this tossed out Senate tradition, but it also flies in the face of McConnell's complaints about the minority party being treated unfairly.

Hypocrisy, thy name is Mitch.

@briantylercohen It would be perfect, except that Mitch McConnell doesnt care.
— Wapiti Grizzly (@Wapiti Grizzly) 1554483594.0

McConnell whining about obstruction is rich, to say the least.

@briantylercohen @joncoopertweets Mitch the bitch is the gravedigger of American democracy!
— brotherstones (@brotherstones) 1554483960.0

“For Leader McConnell to brag about confirming more judges than ever before then complain about Democratic obstruction and say the process is broken ... is the height of hypocrisy,“ Schumer said.

“I am sorry, so sorry, my Republican colleagues have gone along with Sen. McConnell’s debasement of the Senate,“ Schumer said. “To do this for such blatantly political ends is simply unworthy of this institution.”

Oh, and Bennet delivered his fiery speech two days after announcing that he has prostate cancer.

This happened at about the same time that he revealed that he has prostate cancer. We’re so, so behind you, @SenatorBennet.
— Brian Tyler Cohen (@Brian Tyler Cohen) 1554490475.0

Bennet, 54, was diagnosed in March will undergo surgery later this month. His commitment remains intact.

"The work we have in front of us to restore a politics that is worthy of our kids and grandkids has never been more important," Bennet said in a statement. "This unanticipated hurdle only reinforces how strongly I feel about contributing to the larger conversation about the future of our country, and I am even more committed to drive that conversation in a positive direction."

Bennet told the Colorado Independent that he intends to announce a run for president once he has completed his recovery.

"The idea was to announce sometime in April," Bennet told the outlet. "That was the plan. We hired some staff. We interviewed people for positions in New Hampshire and Iowa. And then I went for the physical. In my last physical, my PSA (a protein produced by the prostate) was high. They did a biopsy, and it was clear. But this time, it was not clear."
michael bennetMitch McConnellnuclear option