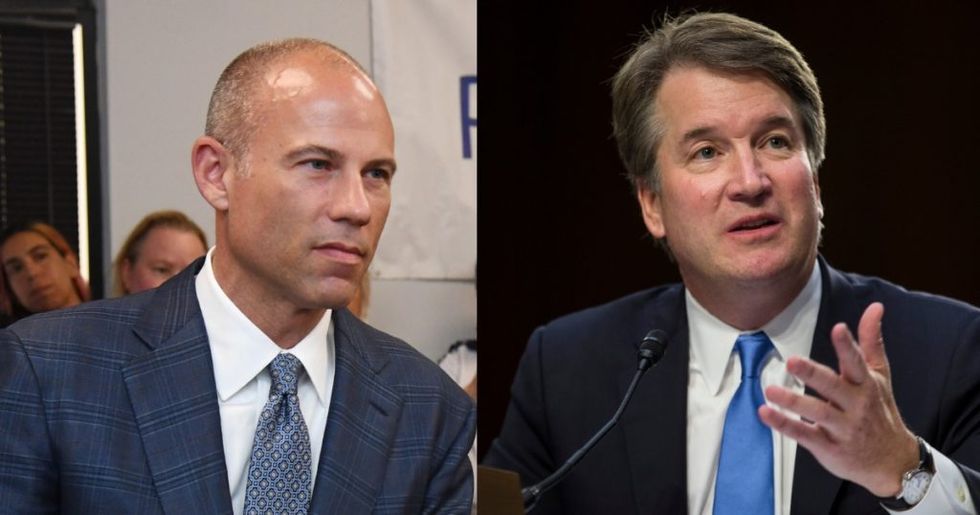 Michael Avenatti revealed on Sunday that he is representing a third woman accusing Supreme Court nominee Brett Kavanaugh of sexual misconduct. Avenatti made the announcement in a series of tweets containing graphic questions about Kavanaugh's behavior during his time at Yale University.

"I represent a woman with credible information regarding Judge Kavanaugh and Mark Judge," Avenatti wrote. "We will be demanding the opportunity to present testimony to the committee and will likewise be demanding that Judge and others be subpoenaed to testify. The nomination must be withdrawn."

I represent a woman with credible information regarding Judge Kavanaugh and Mark Judge. We will be demanding the op… https://t.co/t94M95yekN
— Michael Avenatti (@Michael Avenatti) 1537745623.0

Avenatti shared an email exchange he had with Mike Davis, Chief Counsel for Nominations for U.S. Senate Committee on the Judiciary, in which the attorney demands a "thorough, open and fair" investigation, "which is what the American public deserves. It must not be rushed and evidence/witnesses must not be hidden."

The email from Avenatti to Davis contained six questions for Kavanaugh based on "significant evidence" that Kavanaugh attended "multiple house parties in the Washington D.C. area during the early 1980's," at which the future judge and his college friends allegedly "would participate in the targeting of women with alcohol/drugs" and "allow a 'train' of men subsequently gang rape them."

The questions are as follows:

"Did you ever target one or more women for sex or rape at a house party? Did you ever assist Mark Judge or others in doing so?"

"Did you ever attend a house party during which a woman was gang-raped or used for sex by multiple men?"

"Did you ever witness a line of men outside a bedroom at any house party where you understood a woman was in the bedroom being raped or being taken advantage of?"

"Did you ever participate in any sexual conduct with a woman at a house party whom you understood to be intoxicated or under the influence of drugs?"

"Did you ever communicate with Mike Judge or anyone else about your participation in a 'train' involving an intoxicated woman?"

"Did you ever or object or attempt to prevent one or more men from participating in the rape, or taking advantage, of a woman at any house party?"

My e-mail of moments ago with Mike Davis, Chief Counsel for Nominations for U.S. Senate Committee on the Judiciary.… https://t.co/M00dBDIgbE
— Michael Avenatti (@Michael Avenatti) 1537751762.0

Kavanaugh has denied all the accusations.

The questions are profoundly disturbing.

People are wondering if there's more to the story.

@MichaelAvenatti @DMendoza2032 My God, any @GOP Senator or Congressperson or any other member of this administratio… https://t.co/UMEbborT1r
— Lynn Beckman (@Lynn Beckman) 1537763745.0

@_tatvamasi @MichaelAvenatti Wtf is happening! I log off Twitter for the day and now Avenatti is involved with the… https://t.co/MP9qWqWnQr
— Aten (@Aten) 1537770274.0

Avenatti told Politico on Sunday night that he represents a group of people who "can corroborate allegations involving Kavanaugh and his longtime friend in the 1980s."

One of the individuals is a victim, Avenatti specified.

"She will testify," he said. “But before she does, she will likely appear on camera for an interview.”

The others were witnesses, Avenatti confirmed.

“I represent multiple clients, they are witnesses," he said. "I’m representing multiple individuals that have knowledge of this, there’s no other attorneys involved."

Avenatti added that the alleged witnesses “went to schools in the same general areas" as Kavanaugh, who attended Georgetown Preparatory School in Bethesda, Maryland. "These house parties were widely attended.”

Avenatti's declaration of a third Kavanaugh accuser came shortly after the Ronan Farrow published a bombshell story in the New Yorker about a woman claiming Kavanaugh sexually assaulted her at a party at Yale.

Deborah Ramirez told the New Yorker that Kavanaugh "exposed himself at a drunken dormitory party, thrust his penis in her face, and caused her to touch it without her consent as she pushed him away.”

Avenatti tweeted Sunday night that Ramirez is not his client.

Last week, psychology professor Dr. Christine Blasey Ford went public with her allegation that a "stumbling drunk" Kavanaugh had attempted to rape her at a house party while they were both in high school.

The new accusations, Avenatti explained, are "not out of character from what Dr. Ford said."